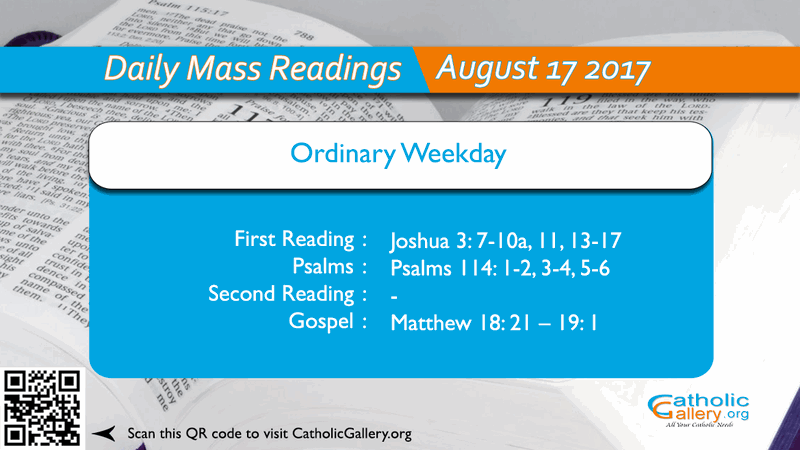 7 And the Lord said to Josue: This day will I begin to exalt thee before Israel: that they may know that as I was with Moses, so I am with thee also.

8 And do thou command the priests that carry the ark of the covenant, and say to them: When you shall have entered into part of the water of the Jordan, stand in it.

9 And Josue said to the children of Israel: Come hither and hear the word of the Lord your God.

10 And again he said

11 Behold the ark of the covenant of the Lord of all the earth shall go before you into the Jordan.

13 And when the priests, that carry the ark of the Lord the God of the whole earth, shall set the soles of their feet in the waters of the Jordan, the waters that are beneath shall run down and go off: and those that come from above, shall stand together upon a heap.

14 So the people went out of their tents, to pass over the Jordan: and the priests that carried the ark of the covenant. went on before them.

15 And as soon as they came into the Jordan, and their feet were dipped in part of the water, (now the Jordan, it being harvest time, had filled the banks of its channel,)

16 The waters that came down from above stood in one place, and swelling up like a mountain, were seen afar off from the city that is called Adom, to the place of Sarthan: but those that were beneath, ran down into the sea of the wilderness (which now is called the Dead Sea) until they wholly failed.

17 And the people marched over against Jericho: and the priests that carried the ark of the covenant of the Lord, stood girded upon the dry ground in the midst of the Jordan, and all the people passed over through the channel that was dried up.

1 When Israel went out of Egypt, the house of Jacob from a barbarous people:

2 Judea made his sanctuary, Israel his dominion.

3 The sea saw and fled: Jordan was turned back.

5 What ailed thee, O thou sea, that thou didst flee: and thou, O Jordan, that thou wast turned back?

21 Then came Peter unto him and said: Lord, how often shall my brother offend against me, and I forgive him? till seven times?

23 Therefore is the kingdom of heaven likened to a king, who would take an account of his servants.

24 And when he had begun to take the account, one was brought to him, that owed him ten thousand talents.

25 And as he had not wherewith to pay it, his lord commanded that he should be sold, and his wife and children and all that he had, and payment to be made.

26 But that servant falling down, besought him, saying: Have patience with me, and I will pay thee all.

27 And the lord of that servant being moved with pity, let him go and forgave him the debt.

28 But when that servant was gone out, he found one of his fellow servants that owed him an hundred pence: and laying hold of him, throttled him, saying: Pay what thou owest.

29 And his fellow servant falling down, besought him, saying: Have patience with me, and I will pay thee all.

30 And he would not: but went and cast him into prison, till he paid the debt.

31 Now his fellow servants seeing what was done, were very much grieved, and they came and told their lord all that was done.

32 Then his lord called him; and said to him: Thou wicked servant, I forgave thee all the debt, because thou besoughtest me:

34 And his lord being angry, delivered him to the torturers until he paid all the debt.

35 So also shall my heavenly Father do to you, if you forgive not every one his brother from your hearts.

19:1 And it came to pass when Jesus had ended these words, he departed from Galilee, and came into the coasts of Judea, beyond Jordan.

The readings on this page are taken from the Douay-Rheims Catholic Bible. You can also read the Mass Readings taken from the New Jerusalem Bible, which is used at Mass in most of the English-speaking world. (References, Copyrights).
◄ August 16August 18 ►
ByPradeep Augustine
Print
Facebook
WhatsApp
Twitter
Pinterest
Linkedin
Email
Telegram
LINE
Viber