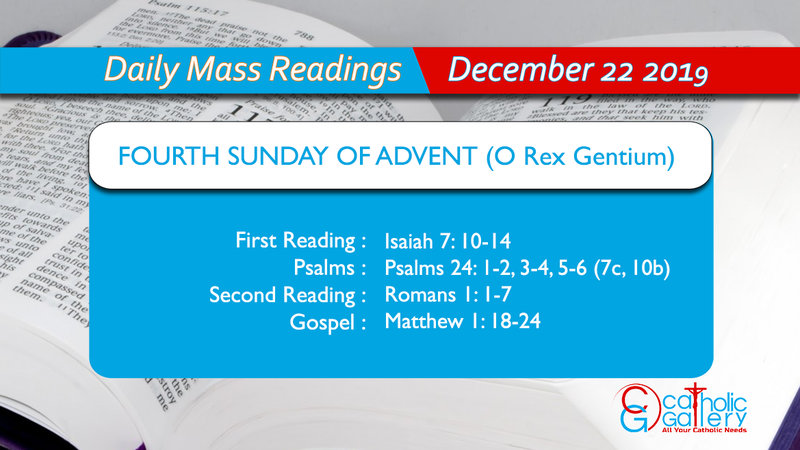 10 And the Lord spoke again to Achaz, saying:

11 Ask thee a sign of the Lord thy God either unto the depth of hell, or unto the height above.

13 And he said: Hear ye therefore, O house of David: Is it a small thing for you to be grievous to men, that you are grievous to my God also?

14 Therefore the Lord himself shall give you a sign. Behold a virgin shall conceive, and bear a son, and his name shall be called Emmanuel.

1 Paul, a servant of Jesus Christ, called to be an apostle, separated unto the gospel of God,

2 Which he had promised before, by his prophets, in the holy scriptures,

3 Concerning his Son, who was made to him of the seed of David, according to the flesh,

4 Who was predestinated the Son of God in power, according to the spirit of sanctification, by the resurrection of our Lord Jesus Christ from the dead;

5 By whom we have received grace and apostleship for obedience to the faith, in all nations, for his name;

6 Among whom are you also the called of Jesus Christ:

7 To all that are at Rome, the beloved of God, called to be saints. Grace to you, and peace from God our Father, and from the Lord Jesus Christ.

22 Now all this was done that it might be fulfilled which the Lord spoke by the prophet, saying:

23 Behold a virgin shall be with child, and bring forth a son, and they shall call his name Emmanuel, which being interpreted is, God with us.

24 And Joseph rising up from sleep, did as the angel of the Lord had commanded him, and took unto him his wife.

The readings on this page are taken from the Douay-Rheims Catholic Bible. You can also read the Mass Readings taken from the New Jerusalem Bible, which is used at Mass in most of the English-speaking world. (References, Copyrights).
◄ December – 21December – 23 ►
ByPradeep Augustine
Print
Facebook
WhatsApp
Twitter
Pinterest
Linkedin
Email
Telegram
LINE
Viber