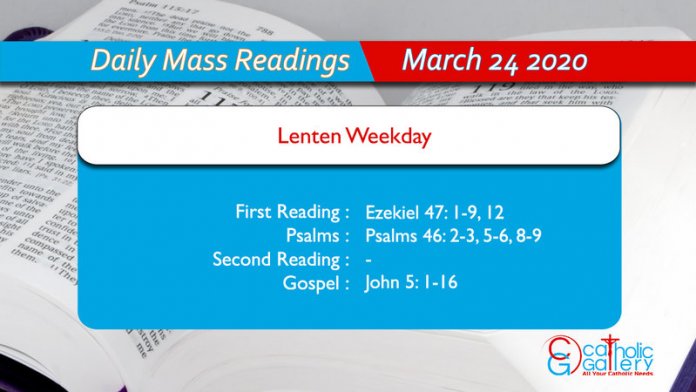 2 And he led me out by the way of the north gate, and he caused me to turn to the way without the outward gate to the way that looked toward the east: and behold there ran out waters on the right side.

3 And when the man that had the line in his hand went out towards the east, he measured a thousand cubits: and he brought me through the water up to the ankles.

4 And again he measured a thousand, and he brought me through the water up to the knees.

6 And he said to me: Surely thou hast seen, O son of man. And he brought me out, and he caused me to turn to the bank of the torrent.

7 And when I had turned myself, behold on the bank of the torrent were very many trees on both sides.

8 And he said to me: These waters that issue forth toward the hillocks of sand to the east, and go down to the plains of the desert, shall go into the sea, and shall go out, and the waters shall be healed.

12 And by the torrent on the banks thereof on both sides shall grow all trees that bear fruit: their leaf shall not fall off, and their fruit shall not fail: every month shall they bring forth firstfruits, because the waters thereof shall issue out of the sanctuary: and the fruits thereof shall be for food, and the leaves thereof for medicine.

2 Our God is our refuge and strength: a helper in troubles, which have found us exceedingly.

3 Therefore we will not fear, when the earth shall be troubled; and the mountains shall be removed into the heart of the sea.

5 The stream of the river maketh the city of God joyful: the most High hath sanctified his own tabernacle.

6 God is in the midst thereof, it shall not be moved: God will help it in the morning early.

8 The Lord of armies is with us: the God of Jacob is our protector.

9 Come and behold ye the works of the Lord: what wonders he hath done upon earth,

1 After these things was a festival day of the Jews, and Jesus went up to Jerusalem.

2 Now there is at Jerusalem a pond, called Probatica, which in Hebrew is named Bethsaida, having five porches.

3 In these lay a great multitude of sick, of blind, of lame, of withered; waiting for the moving of the water.

4 And an angel of the Lord descended at certain times into the pond; and the water was moved. And he that went down first into the pond after the motion of the water, was made whole, of whatsoever infirmity he lay under.

5 And there was a certain man there, that had been eight and thirty years under his infirmity.

6 Him when Jesus had seen lying, and knew that he had been now a long time, he saith to him: Wilt thou be made whole?

7 The infirm man answered him: Sir, I have no man, when the water is troubled, to put me into the pond. For whilst I am coming, another goeth down before me.

8 Jesus saith to him: Arise, take up thy bed, and walk.

9 And immediately the man was made whole: and he took up his bed, and walked. And it was the sabbath that day.

10 The Jews therefore said to him that was healed: It is the sabbath; it is not lawful for thee to take up thy bed.

11 He answered them: He that made me whole, he said to me, Take up thy bed, and walk.

12 They asked him therefore: Who is that man who said to thee, Take up thy bed, and walk?

13 But he who was healed, knew not who it was; for Jesus went aside from the multitude standing in the place.

14 Afterwards, Jesus findeth him in the temple, and saith to him: Behold thou art made whole: sin no more, lest some worse thing happen to thee.

15 The man went his way, and told the Jews, that it was Jesus who had made him whole.

16 Therefore did the Jews persecute Jesus, because he did these things on the sabbath.

The readings on this page are taken from the Douay-Rheims Catholic Bible. You can also read the Mass Readings taken from the New Jerusalem Bible, which is used at Mass in most of the English-speaking world. (References, Copyrights)
◄ March – 23 March – 25 ►