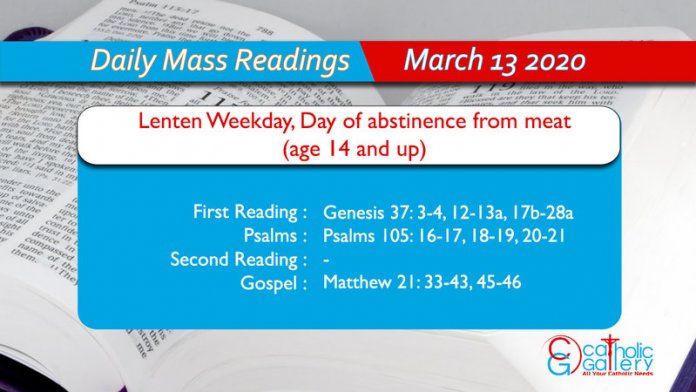 Lenten Weekday, Day of abstinence from meat (age 14 and up)

3 Now Israel loved Joseph above all his sons, because he had him in his old age: and he made him a coat of divers colours.

4 And his brethren seeing that he was loved by his father, more than all his sons, hated him, and could not speak peaceably to him.

12 And when his brethren abode in Sichem feeding their father’s flocks,

13 Israel said to him: Thy brethren feed the sheep in Sichem: come, I will send thee to them. And when he answered:

17 And the man said to him: They are departed from this place: for I heard them say: Let us go to Dothain. And Joseph went forward after his brethren, and found them in Dothain.

18 And when they saw him afar off, before he came nigh them, they thought to kill him.

19 And said one to another: Behold the dreamer cometh.

20 Come, let us kill him, and cast him into some old pit: and we will say: Some evil beast hath devoured him: and then it shall appear what his dreams avail him:

21 And Ruben hearing this, endeavoured to deliver him out of their hands, and said:

22 Do not take away his life, nor shed his blood: but cast him into this pit, that is in the wilderness, and keep your hands harmless: now he said this, being desirous to deliver him out of their hands and to restore him to his father.

23 And as soon as he came to his brethren, they forthwith stript him of his outside coat, that was of divers colours:

24 And cast him into an old pit, where there was no water.

25 And sitting down to eat bread, they saw some Ismaelites on their way coming from Galaad, with their camels, carrying spices, and balm, and myrrh to Egypt.

26 And Juda said to his brethren: What will it profit us to kill our brother, and conceal his blood?

27 It is better that he be sold to the Ismaelites, and that our hands be not defiled: for he is our brother and our flesh. His brethren agreed to his words.

28 And when the Madianite merchants passed by, they drew him out of the pit, and sold him to the Ismaelites, for twenty pieces of silver: and they led him into Egypt.

16 And he called a famine upon the land: and he broke in pieces all the support of bread.

17 He sent a man before them: Joseph, who was sold for a slave.

18 They humbled his feet in fetters: the iron pierced his soul,

19 Until his word came. The word of the Lord inflamed him.

20 The king sent, and he released him: the ruler of the people, and he set him at liberty.

21 He made him master of his house, and ruler of all his possession.

33 Hear ye another parable. There was a man an householder, who planted a vineyard, and made a hedge round about it, and dug in it a press, and built a tower, and let it out to husbandmen; and went into a strange country.

34 And when the time of the fruits drew nigh, he sent his servants to the husbandmen that they might receive the fruits thereof.

35 And the husbandmen laying hands on his servants, beat one, and killed another, and stoned another.

36 Again he sent other servants more than the former; and they did to them in like manner.

37 And last of all he sent to them his son, saying: They will reverence my son.

38 But the husbandmen seeing the son, said among themselves: This is the heir: come, let us kill him, and we shall have his inheritance.

39 And taking him, they cast him forth out of the vineyard, and killed him.

40 When therefore the lord of the vineyard shall come, what will he do to those husbandmen?

41 They say to him: He will bring those evil men to an evil end; and will let out his vineyard to other husbandmen, that shall render him the fruit in due season.

42 Jesus saith to them: Have you never read in the Scriptures: The stone which the builders rejected, the same is become the head of the corner? By the Lord this has been done; and it is wonderful in our eyes.

43 Therefore I say to you, that the kingdom of God shall be taken from you, and shall be given to a nation yielding the fruits thereof.

45 And when the chief priests and Pharisees had heard his parables, they knew that he spoke of them.

46 And seeking to lay hands on him, they feared the multitudes: because they held him as a prophet.

The readings on this page are taken from the Douay-Rheims Catholic Bible. You can also read the Mass Readings taken from the New Jerusalem Bible, which is used at Mass in most of the English-speaking world. (References, Copyrights)
◄ March – 12 March – 14 ►