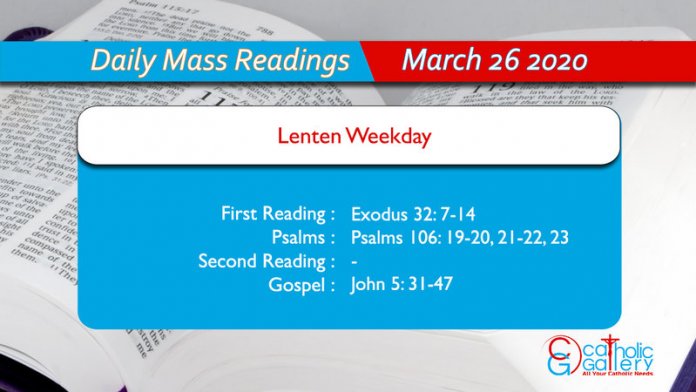 7 And the Lord spoke to Moses, saying: Go, get thee down: thy people, which thou hast brought out of the land of Egypt, hath sinned.

8 They have quickly strayed from the way which thou didst shew them: and they have made to themselves a molten calf, and have adored it, and sacrificing victims to it, have said: These are thy gods, O Israel, that have brought thee out of the land of Egypt.

9 And again the Lord said to Moses: See that this people is stiffnecked:

10 Let me alone, that my wrath may be kindled against them, and that I may destroy them, and I will make of thee a great nation.

11 But Moses besought the Lord his God, saying: Why, O Lord, is thy indignation kindled against thy people, whom thou hast brought out of the land of Egypt, with great power, and with a mighty hand?

12 Let not the Egyptians say, I beseech thee: He craftily brought them out, that he might kill them in the mountains, and destroy them from the earth: let thy anger cease, and be appeased upon the wickedness of thy people.

13 Remember Abraham, Isaac, and Israel, thy servants, to whom thou sworest by thy own self, saying: I will multiply your seed as the stars of heaven: and this whole land that I have spoken of, I will give to you seed, and you shall possess it for ever.

14 And the Lord was appeased from doing the evil which he had spoken against his people.

21 They forgot God, who saved them, who had done great things in Egypt,

22 Wondrous works in the land of Cham: terrible things in the Red Sea.

31 If I bear witness of myself, my witness is not true.

32 There is another that beareth witness of me; and I know that the witness which he witnesseth of me is true.

33 You sent to John, and he gave testimony to the truth.

34 But I receive not testimony from man: but I say these things, that you may be saved.

35 He was a burning and a shining light: and you were willing for a time to rejoice in his light.

37 And the Father himself who hath sent me, hath given testimony of me: neither have you heard his voice at any time, nor seen his shape.

38 And you have not his word abiding in you: for whom he hath sent, him you believe not.

39 Search the scriptures, for you think in them to have life everlasting; and the same are they that give testimony of me.

40 And you will not come to me that you may have life.

41 I receive glory not from men.

42 But I know you, that you have not the love of God in you.

43 I am come in the name of my Father, and you receive me not: if another shall come in his own name, him you will receive.

44 How can you believe, who receive glory one from another: and the glory which is from God alone, you do not seek?

45 Think not that I will accuse you to the Father. There is one that accuseth you, Moses, in whom you trust.

46 For if you did believe Moses, you would perhaps believe me also; for he wrote of me.

47 But if you do not believe his writings, how will you believe my words?

The readings on this page are taken from the Douay-Rheims Catholic Bible. You can also read the Mass Readings taken from the New Jerusalem Bible, which is used at Mass in most of the English-speaking world. (References, Copyrights).
◄ March – 25 March – 27 ►
By Pradeep Augustine
Print
Facebook
WhatsApp
Twitter
Pinterest
Linkedin
Email
Telegram
LINE
Viber