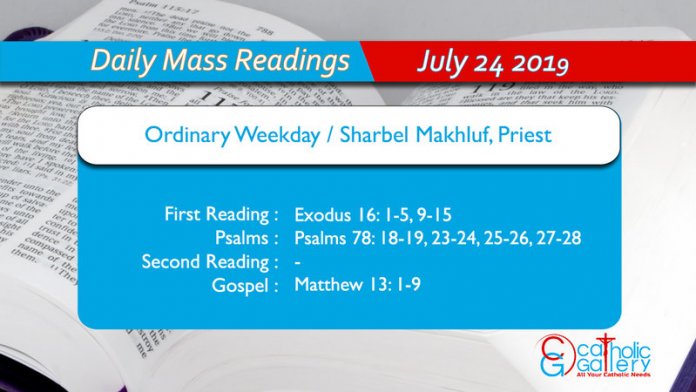 1 And they set forward from Elim, and all the multitude of the children of Israel came into the desert of Sin, which is between Elim and Sinai: the fifteenth day of the second month, after they came out of the land of Egypt.

2 And all the congregation of the children of Israel murmured against Moses and Aaron in the wilderness.

3 And the children of Israel said to them: Would to God we had died by the hand of the Lord in the land of Egypt, when we sat over the flesh pots, and ate bread to the full. Why have you brought us into this desert, that you might destroy all the multitude with famine?

4 And the Lord said to Moses: Behold I will rain bread from heaven for you: let the people go forth, and gather what is sufficient for every day: that I may prove them whether they will walk in my law, or not.

5 But the sixth day let them provide for to bring in: and let it be double to that they were wont to gather every day.

9 Moses also said to Aaron: Say to the whole congregation of the children of Israel: Come before the Lord: for he hath heard your murmuring.

10 And when Aaron spoke to all the assembly of the children of Israel, they looked towards the wilderness: and behold the glory of the Lord appeared in a cloud.

11 And the Lord spoke to Moses, saying:

12 I have heard the murmuring of the children of Israel: say to them: In the evening you shall eat flesh, and in the morning you shall have your fill of bread: and you shall know that I am the Lord your God.

13 So it came to pass in the evening, that quails coming up, covered the camp: and in the morning, a dew lay round about the camp.

14 And when it had covered the face of the earth, it appeared in the wilderness small, and as it were beaten with a pestle, like unto the hoar frost on the ground.

15 And when the children of Israel saw it, they said one to another: Manhu! which signifieth: What is this! for they knew not what it was. And Moses said to them: This is the bread, which the Lord hath given you to eat.

18 And they tempted God in their hearts, by asking meat for their desires.

19 And they spoke ill of God: they said: Can God furnish a table in the wilderness?

23 And he had commanded the clouds from above, and had opened the doors of heaven.

24 And had rained down manna upon them to eat, and had given them the bread of heaven.

25 Man ate the bread of angels: he sent them provisions in abundance.

26 He removed the south wind from heaven: and by his power brought in the southwest wind.

27 And he rained upon them flesh as dust: and feathered fowls like as the sand of the sea.

28 And they fell in the midst of their camp, round about their pavilions.

1 The same day Jesus going out of the house, sat by the sea side.

2 And great multitudes were gathered unto him, so that he went up into a boat and sat: and all the multitude stood on the shore.

3 And he spoke to them many things in parables, saying: Behold the sower went forth to sow.

4 And whilst he soweth some fell by the way side, and the birds of the air came and ate them up.

5 And other some fell upon stony ground, where they had not much earth: and they sprung up immediately, because they had no deepness of earth.

6 And when the sun was up they were scorched: and because they had not root, they withered away.

7 And others fell among thorns: and the thorns grew up and choked them.

8 And others fell upon good ground: and they brought forth fruit, some an hundredfold, some sixtyfold, and some thirtyfold.

9 He that hath ears to hear, let him hear.

The readings on this page are taken from the Douay-Rheims Catholic Bible. You can also read the Mass Readings taken from the New Jerusalem Bible, which is used at Mass in most of the English-speaking world. (References, Copyrights).
◄ July – 23 July – 25 ►
By Pradeep Augustine
Print
Facebook
WhatsApp
Twitter
Pinterest
Linkedin
Email
Telegram
LINE
Viber