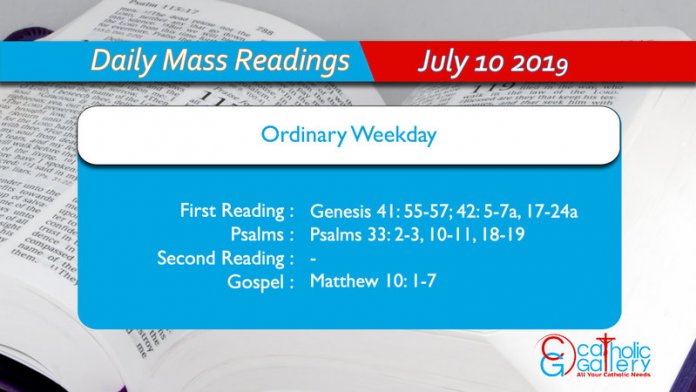 55 And when there also they began to be famished, the people cried to Pharao for food. And he said to them: Go to Joseph: and do all that he shall say to you.

56 And the famine increased daily in all the land: and Joseph opened all the barns, and sold to the Egyptians: for the famine had oppressed them also.

57 And all provinces came into Egypt, to buy food, and to seek some relief of their want.

42:5 And they entered into the land of Egypt with others that went to buy. For the famine was in the land of Chanaan.

6 And Joseph was governor in the land of Egypt, and corn was sold by his direction to the people. And when his brethren had bowed down to him,

7 And he knew them, he spoke as it were to strangers somewhat roughly, asking them: Whence came you? They answered: From the land of Chanaan, to buy necessaries of life.

17 So he put them in prison three days.

18 And the third day he brought them out of prison, and said: Do as I have said, and you shall live: for I fear God.

19 If you be peaceable men, let one of your brethren be bound in prison: and go ye your ways and carry the corn that you have bought, unto your houses.

20 And bring your youngest brother to me, that I may find your words to be true, and you may not die. They did as he had said.

21 And they talked one to another: We deserve to suffer these things, because we have sinned against our brother, seeing the anguish of his soul, when he besought us, and we would not hear: therefore is this affliction come upon us.

22 And Ruben one of them, said: Did not I say to you: Do not sin against the boy: and you would not hear me? Behold his blood is required.

23 And they knew not that Joseph understood, because he spoke to them by an interpreter.

24 And he turned himself away a little while, and wept: and returning he spoke to them.

2 Give praise to the Lord on the harp; sing to him with the psaltery, the instrument of ten strings.

3 Sing to him a new canticle, sing well unto him with a loud noise.

11 But the counsel of the Lord standeth for ever: the thoughts of his heart to all generations.

1 And having called his twelve disciples together, he gave them power over unclean spirits, to cast them out, and to heal all manner of diseases, and all manner of infirmities.

2 And the names of the twelve apostles are these: The first, Simon who is called Peter, and Andrew his brother,

4 Simon the Cananean, and Judas Iscariot, who also betrayed him.

5 These twelve Jesus sent: commanding them, saying: Go ye not into the way of the Gentiles, and into the city of the Samaritans enter ye not.

6 But go ye rather to the lost sheep of the house of Israel.

7 And going, preach, saying: The kingdom of heaven is at hand.

The readings on this page are taken from the Douay-Rheims Catholic Bible. You can also read the Mass Readings taken from the New Jerusalem Bible, which is used at Mass in most of the English-speaking world. (References, Copyrights).
◄ July – 9 July – 11 ►
By Pradeep Augustine
Print
Facebook
WhatsApp
Twitter
Pinterest
Linkedin
Email
Telegram
LINE
Viber