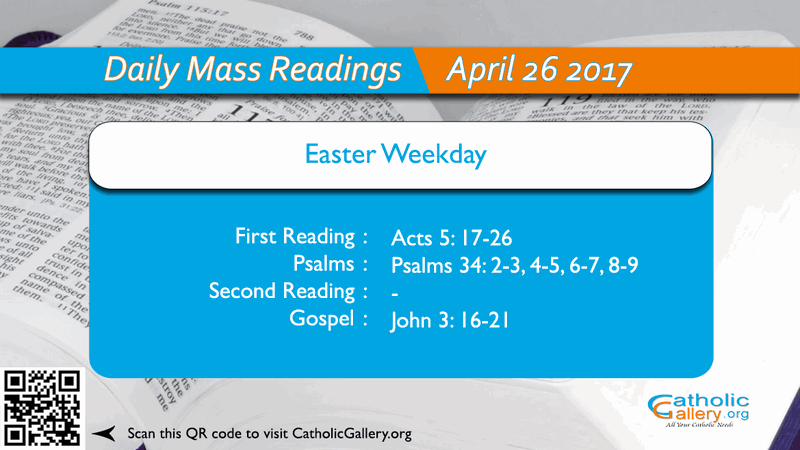 17 Then the high priest rising up, and all they that were with him, (which is the heresy of the Sadducees,) were filled with envy.

18 And they laid hands on the apostles, and put them in the common prison.

19 But an angel of the Lord by night opening the doors of the prison, and leading them out, said:

20 Go, and standing speak in the temple to the people all the words of this life.

21 Who having heard this, early in the morning, entered into the temple, and taught. And the high priest coming, and they that were with him, called together the council, and all the ancients of the children of Israel; and they sent to the prison to have them brought.

22 But when the ministers came, and opening the prison, found them not there, they returned and told,

23 Saying: The prison indeed we found shut with all diligence, and the keepers standing before the doors; but opening it, we found no man within.

24 Now when the officer of the temple and the chief priests heard these words, they were in doubt concerning them, what would come to pass.

25 But one came and told them: Behold, the men whom you put in prison are in the temple standing, and teaching the people.

26 Then went the officer with the ministers, and brought them without violence; for they feared the people, lest they should be stoned.

2 I will bless the Lord at all times, his praise shall be always in my mouth.

3 In the Lord shall my soul be praised: let the meek hear and rejoice.

4 O magnify the Lord with me; and let us extol his name together.

5 I sought the Lord, and he heard me; and he delivered me from all my troubles.

6 Come ye to him and be enlightened: and your faces shall not be confounded.

7 This poor man cried, and the Lord heard him: and saved him out of all his troubles.

8 The angel of the Lord shall encamp round about them that fear him: and shall deliver them.

9 O taste, and see that the Lord is sweet: blessed is the man that hopeth in him.

16 For God so loved the world, as to give his only begotten Son; that whosoever believeth in him, may not perish, but may have life everlasting.

17 For God sent not his Son into the world, to judge the world, but that the world may be saved by him.

18 He that believeth in him is not judged. But he that doth not believe, is already judged: because he believeth not in the name of the only begotten Son of God.

19 And this is the judgment: because the light is come into the world, and men loved darkness rather than the light: for their works were evil.

20 For every one that doth evil hateth the light, and cometh not to the light, that his works may not be reproved.

21 But he that doth truth, cometh to the light, that his works may be made manifest, because they are done in God.

The readings on this page are taken from the Douay-Rheims Catholic Bible. You can also read the Mass Readings taken from the New Jerusalem Bible, which is used at Mass in most of the English-speaking world. (References, Copyrights).
◄ April 25April 27 ►
ByPradeep Augustine
Print
Facebook
WhatsApp
Twitter
Pinterest
Linkedin
Email
Telegram
LINE
Viber