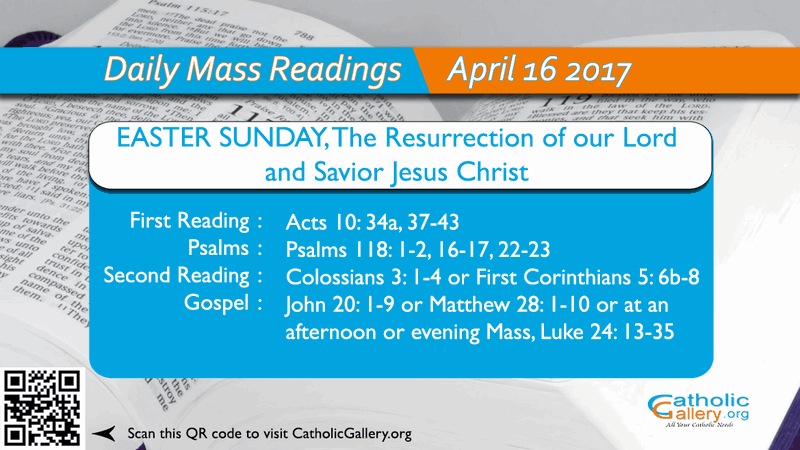 1 And in the end of the sabbath, when it began to dawn towards the first day of the week, came Mary Magdalen and the other Mary, to see the sepulchre.

2 And behold there was a great earthquake. For an angel of the Lord descended from heaven, and coming, rolled back the stone, and sat upon it.

3 And his countenance was as lightning, and his raiment as snow.

4 And for fear of him, the guards were struck with terror, and became as dead men.

5 And the angel answering, said to the women: Fear not you; for I know that you seek Jesus who was crucified.

6 He is not here, for he is risen, as he said. Come, and see the place where the Lord was laid.

7 And going quickly, tell ye his disciples that he is risen: and behold he will go before you into Galilee; there you shall see him. Lo, I have foretold it to you.

8 And they went out quickly from the sepulchre with fear and great joy, running to tell his disciples.

9 And behold Jesus met them, saying: All hail. But they came up and took hold of his feet, and adored him.

10 Then Jesus said to them: Fear not. Go, tell my brethren that they go into Galilee, there they shall see me.

The readings on this page are taken from the Douay-Rheims Catholic Bible. You can also read the Mass Readings taken from the New Jerusalem Bible, which is used at Mass in most of the English-speaking world. (References, Copyrights).
◄ April 15April 17 ►
ByPradeep Augustine
Print
Facebook
WhatsApp
Twitter
Pinterest
Linkedin
Email
Telegram
LINE
Viber