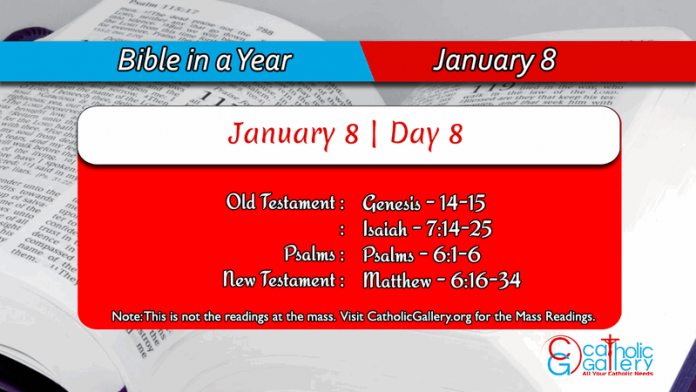 1 Now it happened in that time that Amraphel, king of Shinar, and Arioch, king of Pontus, and Chedorlaomer, king of the Elamites, and Tidal, king of the Nations,

3 All these came together in the wooded valley, which is now the Sea of Salt.

4 For they had served Chedorlaomer for twelve years, and in the thirteenth year they withdrew from him.

5 Therefore, in the fourteenth year, Chedorlaomer arrived, and the kings who were with him. And they struck the Rephaim at Ashteroth of the two horns, and the Zuzim with them, and the Emim at Shaveh-Kiriathaim.

6 and the Chorreans in the mountains of Seir, even to the plains of Paran, which is in wilderness.

7 And they returned and arrived at the fountain of Mishpat, which is Kadesh. And they struck the entire region of the Amalekites, and the Amorites who dwelt in Hazazontamar.

9 namely, against Chedorlaomer, king of the Elamites, and Tidal, king of the Nations, and Amraphel, king of Shinar, and Arioch, king of Pontus: four kings against five.

10 Now the wooded valley had many pits of bitumen. And so the king of Sodom and the king of Gomorrah turned back and they fell there. And those who remained, fled to the mountain.

11 Then they took all the substance of the Sodomites and the Gomorrahites, and all that pertained to food, and they went away,

12 along with both Lot, the son of Abram’s brother, who lived in Sodom, and his substance.

13 And behold, one who had escaped reported it to Abram the Hebrew, who lived in the steep valley of Mamre the Amorite, who was the brother of Eshcol, and the brother of Aner. For these had formed an agreement with Abram.

14 When Abram had heard this, namely, that his brother Lot had been taken captive, he numbered three hundred and eighteen of his own armed men and he went in pursuit all the way to Dan.

15 And dividing his company, he rushed upon them in the night. And he struck them and pursued them as far as Hobah, which is on the left hand of Damascus.

16 And he brought back all the substance, and Lot his brother, with his substance, likewise the women and the people.

17 Then the king of Sodom went out to meet him, after he returned from the slaughter at Chedorlaomer, and the kings who were with him at the valley of Shaveh, which is the valley of the king.

18 Then in truth, Melchizedek, the king of Salem, brought forth bread and wine, for he was a priest of the Most High God;

19 he blessed him, and he said: “Blessed be Abram by the Most High God, who created heaven and earth.

20 And blessed be the Most High God, through whose protection the enemies are in your hands.” And he gave him tithes from everything.

21 Then the king of Sodom said to Abram, “Give me these souls, and take the rest for yourself.”

22 And he responded to him: “I lift up my hand to the Lord God, the Most High, the Possessor of heaven and earth,

23 that from one thread within a blanket, even to a single shoelace, I will not take anything from that which is yours, lest you say, ‘I have enriched Abram,’

24 except that which the young men have eaten, and the shares for the men who came with me: Aner, Eshcol, and Mamre. These will take their shares.”

1 And so, these things having been transacted, the word of the Lord came to Abram by a vision, saying: “Do not be afraid, Abram, I am your protector, and your reward is exceedingly great.”

2 And Abram said: “Lord God, what will you give to me? I may go without children. And the son of the steward of my house is this Eliezer of Damascus.”

3 And Abram added: “Yet to me you have not given offspring. And behold, my servant born in my house will be my heir.”

4 And immediately the word of the Lord came to him, saying: “This one will not be your heir. But he who will come from your loins, the same will you have for your heir.”

6 Abram believed God, and it was reputed to him unto justice.

7 And he said to him, “I am the Lord who led you away from Ur of the Chaldeans, so as to give you this land, and so that you would possess it.”

8 But he said, “Lord God, in what way may I be able to know that I will possess it?”

10 Taking all these, he divided them through the middle, and placed both parts opposite one another. But the birds he did not divide.

11 And birds descended upon the carcasses, but Abram drove them away.

12 And when the sun was setting, a deep sleep fell upon Abram, and a dread, great and dark, invaded him.

13 And it was said to him: “Know beforehand that your future offspring will be sojourners in a land not their own, and they will subjugate them in servitude and afflict them for four hundred years.

14 Yet truly, I will judge the nation that they will serve, and after this they will depart with great substance.

15 But you will go to your fathers in peace and be buried at a good old age.

16 But in the fourth generation, they will return here. For the iniquities of the Amorites are not yet completed, even to this present time.”

17 Then, when the sun had set, there came a dark mist, and there appeared a smoking furnace and a lamp of fire passing between those divisions.

18 On that day, God formed a covenant with Abram, saying: “To your offspring I will give this land, from the river of Egypt, even to the great river Euphrates:

19 the land of the Kenites and the Kenizzites, the Kadmonites

20 and the Hittites, and the Perizzites, likewise the Rephaim,

14 For this reason, the Lord himself will grant to you a sign. Behold, a virgin will conceive, and she will give birth to a son, and his name will be called Immanuel.

15 He will eat butter and honey, so that he may know to reject evil and to choose good.

16 But even before the boy knows to refuse evil and to choose good, the land that you detest will be abandoned by the face of her two kings.

17 The Lord will lead over you, and over your people, and over the house of your father, such days as have not occurred since the days of the separation of Ephraim from Judah by the king of the Assyrians.

19 And they will arrive, and they all will rest in the torrents of the valleys, and in the caverns of the rocks, and in every thicket, and in every opening.

20 In that day, the Lord will shave with a razor the ones hired by those who are across the river, by the king of the Assyrians, from the head to the hairs of the feet, with the entire beard.

21 And this shall be in that day: a man will raise a cow among oxen, and two sheep,

23 And this shall be in that day: every place, where there were a thousand grapevines worth a thousand pieces of silver, will become thorns and briers.

24 They will enter such places with arrows and bows. For briers and thorns will be throughout the entire land.

25 But as for all the mountains, which will be dug with a hoe, the terror of thorns and briers will not approach those places. And there will be pasture land for oxen, and a range for cattle.”

1 In parts according to verses. A Psalm of David. For the octave.

4 and my soul has been very troubled. But as for you, Lord, when?

5 Turn to me, Lord, and rescue my soul. Save me because of your mercy.

6 For there is no one in death who would be mindful of you. And who will confess to you in Hell?

16 And when you fast, do not choose to become gloomy, like the hypocrites. For they alter their faces, so that their fasting may be apparent to men. Amen I say to you, that they have received their reward.

17 But as for you, when you fast, anoint your head and wash your face,

19 Do not choose to store up for yourselves treasures on earth: where rust and moth consume, and where thieves break in and steal.

20 Instead, store up for yourselves treasures in heaven: where neither rust nor moth consumes, and where thieves do not break in and steal.

21 For where your treasure is, there also is your heart.

22 The lamp of your body is your eye. If your eye is wholesome, your entire body will be filled with light.

23 But if your eye has been corrupted, your entire body will be darkened. If then the light that is in you is darkness, how great will that darkness be!

24 No one is able to serve two masters. For either he will have hatred for the one, and love the other, or he will persevere with the one, and despise the other. You cannot serve God and wealth.

26 Consider the birds of the air, how they neither sow, nor reap, nor gather into barns, and yet your heavenly Father feeds them. Are you not of much greater value than they are?

27 And which of you, by thinking, is able to add one cubit to his stature?

28 And as for clothing, why are you anxious? Consider the lilies of the field, how they grow; they neither work nor weave.

29 But I say to you, that not even Solomon, in all his glory, was arrayed like one of these.

30 So if God so clothes the grass of the field, which is here today, and cast into the oven tomorrow, how much more will he care for you, O little in faith?

33 Therefore, seek first the kingdom of God and his justice, and all these things shall be added to you as well.

34 Therefore, do not be anxious about tomorrow; for the future day will be anxious for itself. Sufficient for the day is its evil.”

◄ January 7 January 9 ►
Bible in a year – Index
December February March
Simplest Bible in a Year plan compiled using the “Catholic Public Domain Version Bible“. This is not the Readings at the Mass. For the Mass Readings, check the Mass Readings taken from the New Jerusalem Bible or the Douay-Rheims Catholic Bible.
By Pradeep Augustine
Print
Facebook
WhatsApp
Twitter
Pinterest