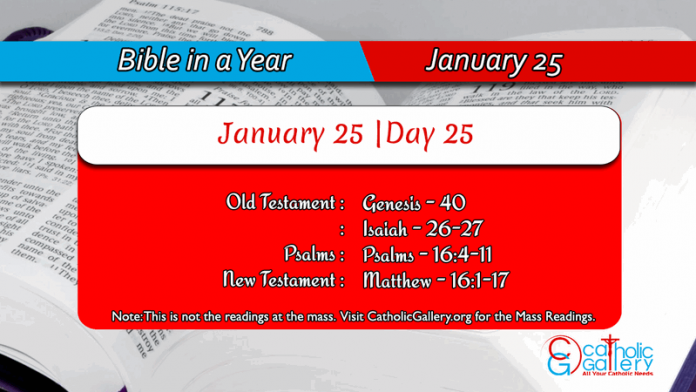 1 While these things were going on, it happened that two eunuchs, the cupbearer of the king of Egypt, and the miller of grain, offended their lord.

2 And Pharaoh, being angry with them, (now the one was in charge of the cupbearers, the other of the millers of grain)

3 sent them to the prison of the leader of the military, in which Joseph also was a prisoner.

4 But the keeper of the prison delivered them to Joseph, who ministered to them also. Some little time passed by, while they were held in custody.

5 And they both saw a similar dream on one night, whose interpretations should be related to one another.

6 And when Joseph had entered to them in the morning, and had seen them sad,

7 he consulted them, saying, “Why is your expression sadder today than usual?”

8 They responded, “We have seen a dream, and there is no one to interpret it for us.” And Joseph said to them, “Doesn’t interpretation belong to God? Recount for me what you have seen.”

9 The chief cupbearer explained his dream first. “I saw before me a vine,

10 on which were three shoots, which grew little by little into buds, and, after the flowers, it matured into grapes.

11 And the cup of Pharaoh was in my hand. Therefore, I took the grapes, and I pressed them into the cup that I held, and I handed the cup to Pharaoh.”

12 Joseph responded: “This is the interpretation of the dream. The three shoots are the next three days,

13 after which Pharaoh will remember your service, and he will restore you to your former position. And you will give him the cup according to your office, as you were accustomed to do before.

14 Only remember me, when it will be well with you, and do me this mercy, to suggest to Pharaoh to lead me out of this prison.

15 For I have been stolen from the land of the Hebrews, and here, innocently, I was cast into the pit.”

16 The chief miller of grain, seeing that he had wisely unraveled the dream, said: “I also saw a dream: that I had three baskets of meal above my head,

17 and in one basket, which was the highest, I carried all foods that are made by the art of baking, and the birds ate from it.”

18 Joseph responded: “This is the interpretation of the dream. The three baskets are the next three days,

19 after which Pharaoh will carry away your head, and also suspend you from a cross, and the birds will tear your flesh.”

20 The third day thereafter was the birthday of Pharaoh. And making a great feast for his servants, he remembered, during the banquet, the chief cupbearer and the chief miller of grain.

21 And he restored the one to his place, to present him the cup;

22 the other he hanged on a gallows, and thus the truth of the interpreter of dreams was proven.

23 And although he advanced with so much prosperity, the chief cupbearer forgot his interpreter of dreams.

1 In that day, this canticle will be sung in the land of Judah. Within it will be set the city of our strength: Zion, a savior, a wall with a bulwark.

2 Open the gates, and let the just people who guard the truth enter.

3 The old error has gone away. You will serve peace: peace, for we have hoped in you.

5 For he will bend down those living in the heights. He will bring low the lofty city. He will lower it, even to the ground. He will tear it down, even to the dust.

6 The foot will tread it down: the feet of the poor, the steps of the indigent.

8 And in the path of your judgments, O Lord, we have endured for you. Your name and your remembrance are the desire of the soul.

9 My soul has desired you in the night. But I will also watch for you with my spirit, in my inmost heart, from the morning. When you accomplish your judgments upon the earth, the inhabitants of the world will learn justice.

10 Let us take pity on the impious one, but he will not learn justice. In the land of the holy ones, he has done iniquity, and so he will not see the glory of the Lord.

11 Lord, let your hand be exalted, and let them not see it. May the envious people see and be confounded. And may fire devour your enemies.

12 Lord, you will give us peace. For all our works have been wrought for us by you.

13 O Lord our God, other lords have possessed us apart from you, but in you alone let us remember your name.

14 Let not the dead live; let not the giants rise up again. For this reason, you have visited and destroyed them, and you have perished all remembrance of them.

16 Lord, they have sought you in anguish. Your doctrine was with them, amid the tribulation of murmuring.

17 Like a woman who has conceived and is approaching the time for delivery, who, in anguish, cries out in her pains, so have we become before your face, O Lord.

18 We have conceived, and it is as if we were in labor, but we have given birth to wind. We have not brought forth salvation on the earth. For this reason, the inhabitants of the earth have not fallen.

19 Your dead shall live. My slain will rise again. Be awakened, and give praise, you who live in the dust! For your dew is the dew of the light, and you shall be dragged down to the land of the giants, to ruination.

20 Go, my people! Enter your chambers. Close your doors behind you. Conceal yourselves for a very brief time, until the indignation has passed over you.

21 For behold, the Lord will go forth from his place, so that he may visit the iniquity of each inhabitant of the earth against him. And the earth will reveal its blood, and it will no longer cover its slain.

2 In that day, the vineyard of pure wine will sing to them.

3 I am the Lord, who watches over it. I will suddenly give drink to it. I will watch over it, night and day, lest perhaps someone visit against it.

4 Indignation is not mine. Who will be a thorn and a brier to me in battle? I will advance against them. I set them on fire together.

6 As they advance with violence against Jacob, Israel will flourish and spring forth, and they will fill the face of the world with offspring.

8 You will judge this by comparing one measure to another, when he has been cast out. He has decided this, by his stern spirit, for the day of heat.

9 Therefore, concerning this, the iniquity of the house of Jacob will be forgiven. And this is the reward of all: that their sin be taken away, when he will have made all the stones of the altar to be like crushed cinders. For the sacred groves and the shrines shall not stand.

10 For the fortified city will be desolate. The shining city will be abandoned and will be left behind like a desert. In that place, the calf will pasture, and in that place, he will lie down, and he will feed from its summits.

11 Its harvest will be crushed by dryness. Women will arrive and teach it, for it is not a wise people. Because of this, he who made it will not take pity on it, and he who formed it will not spare it.

12 And this shall be: in that day, the Lord will strike, from the channel of the river, even to the torrent of Egypt. And you shall be gathered together, one by one, O sons of Israel.

4 Their infirmities were multiplied: afterwards they made haste. I will not gather together their meetings for blood offerings: nor will I be mindful of their names by my lips.

6 The lines are fallen unto me in goodly places: for my inheritance is goodly to me.

7 I will bless the Lord, who hath given me understanding: moreover my reins also have corrected me even till night.

8 I set the Lord always in my sight: for he is at my right hand, that I be not moved.

9 Therefore my heart hath been glad, and my tongue hath rejoiced: moreover my flesh also shall rest in hope.

10 Because thou wilt not leave my soul in hell; nor wilt then give thy holy one to see corruption.

11 Thou hast made known to me the ways of life, thou shalt fill me with joy with thy countenance: at thy right hand are delights even to the end.

1 And Pharisees and Sadducees approached him to test him, and they asked him to show them a sign from heaven.

2 But he responded by saying to them: “When evening arrives, you say, ‘It will be calm, for the sky is red,’

3 and in the morning, ‘Today there will be a storm, for the sky is red and gloomy.’ So then, you know how to judge the appearance of the sky, but you are unable to know the signs of the times?

4 An evil and adulterous generation seeks a sign. And a sign shall not be given to it, except the sign of the prophet Jonah.” And leaving them behind, he went away.

5 And when his disciples went across the sea, they forgot to bring bread.

6 And he said to them, “Consider and beware of the leaven of the Pharisees and the Sadducees.”

7 But they were thinking within themselves, saying, “It is because we have not brought bread.”

8 Then Jesus, knowing this, said: “Why do you consider within yourselves, O little in faith, that it is because you have no bread?

9 Do you not yet understand, nor remember, the five loaves among the five thousand men, and how many containers you took up?

10 Or the seven loaves among the four thousand men, and how many baskets you took up?

11 Why do you not understand that it was not because of bread that I said to you: Beware of the leaven of the Pharisees and the Sadducees?”

12 Then they understood that he was not saying that they should beware of the leaven of bread, but of the doctrine of the Pharisees and the Sadducees.

13 Then Jesus went into parts of Caesarea Philippi. And he questioned his disciples, saying, “Who do men say that the Son of man is?”

14 And they said, “Some say John the Baptist, and others say Elijah, still others say Jeremiah or one of the prophets.”

16 Simon Peter responded by saying, “You are the Christ, the Son of the living God.”

17 And in response, Jesus said to him: “Blessed are you, Simon son of Jonah. For flesh and blood has not revealed this to you, but my Father, who is in heaven.