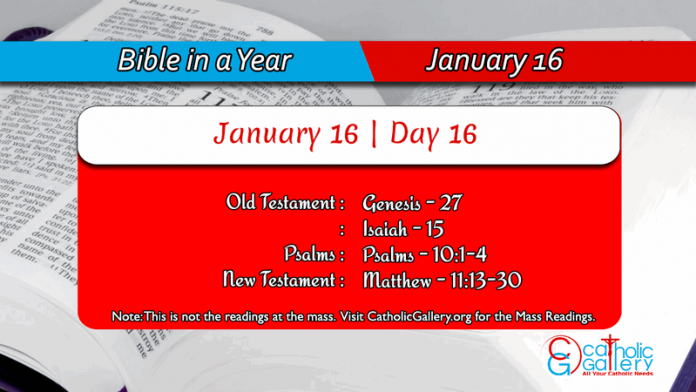 1 Now Isaac was old, and his eyes were cloudy, and so he was not able to see. And he called his elder son Esau, and he said to him, “My son?” And he responded, “Here I am.”

2 His father said to him: “You see that I am old, and I do not know the day of my death.

3 Take your weapons, the quiver and the bow, and go out. And when you have taken something by hunting,

4 make from it a small meal for me, just as you know I like, and bring it, so that I may eat and my soul may bless you before I die.”

5 And when Rebekah had heard this, and he had gone out into the field to fulfill his father’s order,

6 she said to her son Jacob: “I heard your father speaking with your brother Esau, and saying to him,

7 ‘Bring to me from your hunting, and make me foods, so that I may eat and bless you in the sight of the Lord before I die.’

8 Therefore, now my son, agree to my counsel,

9 and go straight to the flock, and bring me two of the best young goats, so that from them I may make meat for your father, such as he willingly eats.

10 Then, when you have brought these in and he has eaten, he may bless you before he dies.”

11 He answered her: “You know that my brother Esau is a hairy man, and I am smooth.

12 If my father should lay hands on me and perceive it, I am afraid lest he think me willing to mock him, and I will bring a curse upon myself, instead of a blessing.”

13 And his mother said to him: “Let this curse be upon me, my son. Yet listen to my voice, and go directly to bring what I said.”

14 He went out, and he brought, and he gave to his mother. She prepared the meats, just as she knew his father liked.

15 And she clothed him with the very fine garments of Esau, which she had at home with her.

16 And she encircled his hands with little pelts from the young goats, and she covered his bare neck.

17 And she gave him the small meal, and she handed him the bread that she had baked.

19 And Jacob said: “I am Esau, your firstborn. I have done as you instructed me. Arise; sit and eat from my hunting, so that your soul may bless me.”

20 And again Isaac said to his son, “How were you able to find it so quickly, my son?” He answered, “It was the will of God, so that what I sought met with me quickly.”

21 And Isaac said, “Come here, so that I may touch you, my son, and may prove whether you are my son Esau, or not.”

22 He approached his father, and when he had felt him, Isaac said: “The voice indeed is the voice of Jacob. But the hands are the hands of Esau.”

23 And he did not recognize him, because his hairy hands made him seem similar to the elder one. Therefore, blessing him,

25 Then he said, “Bring me the foods from your hunting, my son, so that my soul may bless you.” And when he had eaten what was offered, he also brought forth wine for him. And after he finished it,

27 He approached and kissed him. And immediately he perceived the fragrance of his garments. And so, blessing him, he said: “Behold, the smell of my son is like the smell of a plentiful field, which the Lord has blessed.

28 May God give to you, from the dew of heaven and from the fatness of the earth, an abundance of grain and wine.

30 Scarcely had Isaac completed his words, and Jacob departed, when Esau arrived.

31 And he brought his father foods cooked from his hunting, saying, “Arise, my father, and eat from your son’s hunting, so that your soul may bless me.”

33 Isaac became frightened and very astonished. And wondering beyond what can be believed, he said: “Then who is he that a while ago brought me the prey from his hunting, from which I ate, before you arrived? And I blessed him, and he will be blessed.”

34 Esau, having heard his father’s words, roared out with a great outcry. And, being confounded, he said, “But bless me also, my father.”

35 And he said, “Your twin came deceitfully, and he received your blessing.”

36 But he responded: “Justly is his name called Jacob. For he has supplanted me yet another time. My birthright he took away before, and now, this second time, he has stolen my blessing.” And again, he said to his father, “Have you not reserved a blessing for me also?”

37 Isaac answered: “I have appointed him as your lord, and I have subjugated all his brothers as his servants. I have reinforced him with grain and wine, and after this, my son, what more shall I do for you?”

38 And Esau said to him: “Have you only one blessing, father? I beg you, bless me also.” And when he wept with a loud wail,

39 Isaac was moved, and he said to him: “In the fatness of the earth, and in the dew of heaven from above,

40 will your blessing be. You will live by the sword, and you will serve your brother. But the time will arrive when you will shake off and release his yoke from your neck.”

41 Therefore, Esau always hated Jacob, for the blessing with which his father had blessed him. And he said in his heart, “The days will arrive for the mourning of my father, and I will kill my brother Jacob.”

42 These things were reported to Rebekah. And sending and calling for her son Jacob, she said to him, “Behold, your brother Esau is threatening to kill you.

43 Therefore, now my son, listen to my voice. Rise up and flee to my brother Laban, in Haran.

44 And you will dwell with him for a few days, until the fury of your brother subsides,

45 and his indignation ceases, and he forgets the things that you have done to him. After this, I will send for you and bring you from there to here. Why should I be bereaved of both my sons in one day?”

46 And Rebekah said to Isaac, “I am weary of my life because of the daughters of Heth. If Jacob accepts a wife from the stock of this land, I would not be willing to live.”

2 The house has ascended with Dibon to the heights, in mourning over Nebo and over Medeba. Moab has wailed. There will be baldness on all of their heads, and every beard will be shaven.

3 At their crossroads, they have been wrapped with sackcloth. On their rooftops and in their streets, everyone descends, wailing and weeping.

4 Heshbon will cry out with Elealeh. Their voice has been heard as far as Jahaz. Over this, the well-equipped men of Moab wail; each soul will wail to itself.

5 My heart will cry out to Moab; its bars will cry out even to Zoar, like a three-year-old calf. For they will ascend weeping, by way of the ascent of Luhith. And along the way of Horonaim, they will lift up a cry of contrition.

6 For the waters of Nimrim will be desolate, because the plants have withered, and the seedling has failed, and all the greenery has passed away.

7 This is in accord with the magnitude of their works and of their visitation. They will lead them to the torrent of the willows.

8 For an outcry has circulated along the border of Moab; its wailing even to Eglaim, and its clamor even to the well of Elim.

9 Because the waters of Dibon have been filled with blood, I will place even more upon Dibon: those from Moab who flee the lion, and the survivors of the earth.

1 Why, O Lord, hast thou retired afar off? why dost thou slight us in our wants, in the time of trouble?

2 Whilst the wicked man is proud, the poor is set on fire: they are caught in the counsels which they devise.

3 For the sinner is praised in the desires of his soul: and the unjust man is blessed.

4 The sinner hath provoked the Lord according to the multitude of his wrath he will not seek him:

13 For all the prophets and the law prophesied, even until John.

14 And if you are willing to accept it, he is the Elijah, who is to come.

15 Whoever has ears to hear, let him hear.

16 But to what shall I compare this generation? It is like children sitting in the marketplace,

18 For John came neither eating nor drinking; and they say, ‘He has a demon.’

19 The Son of man came eating and drinking; and they say, ‘Behold, a man who eats voraciously and who drinks wine, a friend of tax collectors and sinners.’ But wisdom is justified by her sons.”

20 Then he began to rebuke the cities in which many of his miracles were accomplished, for they still had not repented.

21 Woe to you, Chorazin! Woe to you, Bethsaida! For if the miracles that were done in you had been done in Tyre and Sidon, they would have repented long ago in haircloth and ashes.

22 Yet truly, I say to you, Tyre and Sidon shall be forgiven more than you, on the day of judgment.

23 And you, Capernaum, would you be exalted all the way to heaven? You shall descend all the way to Hell. For if the miracles that were done in you had been done in Sodom, perhaps it would have remained, even to this day.

24 Yet truly, I say to you, that the land of Sodom shall be forgiven more than you, on the day of judgment.”

25 At that time, Jesus responded and said: “I acknowledge you, Father, Lord of Heaven and earth, because you have hidden these things from the wise and the prudent, and have revealed them to little ones.

26 Yes, Father, for this was pleasing before you.

27 All things have been delivered to me by my Father. And no one knows the Son except the Father, nor does anyone know the Father except the Son, and those to whom the Son is willing to reveal him.

28 Come to me, all you who labor and have been burdened, and I will refresh you.

29 Take my yoke upon you, and learn from me, for I am meek and humble of heart; and you shall find rest for your souls.

30 For my yoke is sweet and my burden is light.”

◄ January 15 January 17 ►
Bible in a year – Index
December February March
Simplest Bible in a Year plan compiled using the “Catholic Public Domain Version Bible“. This is not the Readings at the Mass. For the Mass Readings, check the Mass Readings taken from the New Jerusalem Bible or the Douay-Rheims Catholic Bible.
By Pradeep Augustine
Print
Facebook
WhatsApp
Twitter
Pinterest