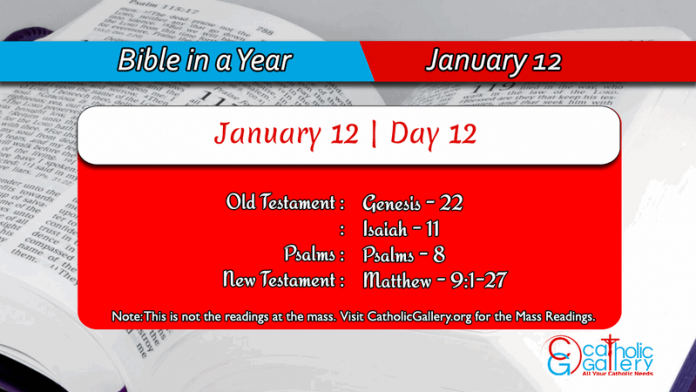 1 After these things occurred, God tested Abraham, and he said to him, “Abraham, Abraham.” And he answered, “Here I am.”

2 He said to him: “Take your only begotten son Isaac, whom you love, and go into the land of vision. And there you shall offer him as a holocaust upon one of the mountains, which I will show to you.”

3 And so Abraham, getting up in the night, harnessed his donkey, taking with him two youths, and his son Isaac. And when he had cut wood for the holocaust, he traveled toward the place, as God had instructed him.

4 Then, on the third day, lifting up his eyes, he saw the place at a distance.

5 And he said to his servants: “Wait here with the donkey. I and the boy will hurry further ahead to that place. After we have worshipped, will return to you.”

6 He also took the wood for the holocaust, and he imposed it upon his son Isaac. And he himself carried in his hands fire and a sword. And as the two continued on together,

7 Isaac said to his father, “My father.” And he answered, “What do you want, son?” “Behold,” he said, “fire and wood. Where is the victim for the holocaust?”

8 But Abraham said, “God himself will provide the victim for the holocaust, my son.” Thus they continued on together.

9 And they came to the place that God had shown to him. There he built an altar, and he set the wood in order upon it. And when he had bound his son Isaac, he laid him on the altar upon the pile of wood.

10 And he reached out his hand and took hold of the sword, in order to sacrifice his son.

11 And behold, an Angel of the Lord called out from heaven, saying, “Abraham, Abraham.” And he answered, “Here I am.”

12 And he said to him, “Do not extend your hand over the boy, and do not do anything to him. Now I know that you fear God, since you have not spared your only begotten son for my sake.”

13 Abraham lifted up his eyes, and he saw behind his back a ram among the thorns, caught by the horns, which he took and offered as a holocaust, instead of his son.

14 And he called the name of that place: ‘The Lord Sees.’ Thus, even to this day, it is said: ‘On the mountain, the Lord will see.’

15 Then the Angel of the Lord called out to Abraham a second time from heaven, saying:

16 By my own self, I have sworn, says the Lord. Because you have done this thing, and have not spared your only begotten son for my sake,

17 I will bless you, and I will multiply your offspring like the stars of heaven, and like the sand which is on the seashore. Your offspring will possess the gates of their enemies.

18 And in your offspring, all the nations of the earth will be blessed, because you obeyed my voice.”

19 Abraham returned to his servants, and they went to Beersheba together, and he lived there.

20 After these things occurred, it was reported to Abraham that Milcah, likewise, had borne sons for his brother Nahor:

21 Uz, the firstborn, and Buz, his brother, and Kemuel, the father of the Syrians,

22 and Chesed, and Hazo, likewise Pildash, and Jidlaph,

23 as well as Bethuel, of whom was born Rebekah. These eight Milcah bore for Nahor, the brother of Abraham.

24 In truth, his concubine, named Reumah, bore Tebah, and Gaham, and Tahash, and Maacah.

1 And a rod will go forth from the root of Jesse, and a flower will ascend from his root.

5 And justice will be the belt around his waist. And faith will be the warrior’s belt at his side.

6 The wolf will dwell with the lamb; and the leopard will lie down with the kid; the calf and the lion and the sheep will abide together; and a little boy will drive them.

7 The calf and the bear will feed together; their young ones will rest together. And the lion will eat straw like the ox.

8 And a breastfeeding infant will play above the lair of the asp. And a child who has been weaned will thrust his hand into the den of the king snake.

9 They will not harm, and they will not kill, on all my holy mountain. For the earth has been filled with the knowledge of the Lord, like the waters covering the sea.

10 In that day, the root of Jesse, who stands as a sign among the people, the same the Gentiles shall beseech, and his sepulcher will be glorious.

11 And this shall be in that day: the Lord will send forth his hand a second time to take possession of the remnant of his people who will be left behind: from Assyria, and from Egypt, and from Pathros, and from Ethiopia, and from Elam, and from Shinar, and from Hamath, and from the islands of the sea.

12 And he will lift up a sign to the nations, and he will gather together the fugitives of Israel, and he will collect the dispersed of Judah from the four regions of the earth.

14 And they will fly upon the shoulders of the Philistines through the sea; together they will plunder the sons of the east. Idumea and Moab will be under the rule of their hand, and the sons of Ammon will be obedient.

15 And the Lord will desolate the tongue of the sea of Egypt. And he will lift up his hand over the river, with the strength of his Spirit; and he will strike it, in its seven streams, so that they may cross through it in their shoes.

16 And there will be a way for the remnant of my people, who will be left behind by the Assyrians: just as there was for Israel in the day that he ascended from the land of Egypt.

1 Unto the end. For the oil and wine presses. A Psalm of David.

2 O Lord, our Lord, how admirable is your name throughout all the earth! For your magnificence is elevated above the heavens.

3 Out of the mouths of babes and infants, you have perfected praise, because of your enemies, so that you may destroy the enemy and the revenger.

4 For I will behold your heavens, the works of your fingers: the moon and the stars, which you have founded.

6 You reduced him to a little less than the Angels; you have crowned him with glory and honor,

7 and you have set him over the works of your hands.

8 You have subjected all things under his feet, all sheep and oxen, and in addition: the beasts of the field,

9 the birds of the air, and the fish of the sea, which pass through the paths of the sea.

10 O Lord, our Lord, how admirable is your name throughout all the earth!

1 And climbing into a boat, he crossed the sea, and he arrived at his own city.

2 And behold, they brought to him a paralytic, lying on a bed. And Jesus, seeing their faith, said to the paralytic, “Be strengthened in faith, son; your sins are forgiven you.”

3 And behold, some of the scribes said within themselves, “He is blaspheming.”

4 And when Jesus had perceived their thoughts, he said: “Why do you think such evil in your hearts?

6 But, so that you may know that the Son of man has authority on earth to forgive sins,” he then said to the paralytic, “Rise up, take up your bed, and go into your house.”

7 And he arose and went into his house.

8 Then the crowd, seeing this, was frightened, and they glorified God, who gave such power to men.

9 And when Jesus passed on from there, he saw, sitting at the tax office, a man named Matthew. And he said to him, “Follow me.” And rising up, he followed him.

10 And it happened that, as he was sitting down to eat in the house, behold, many tax collectors and sinners arrived, and they sat down to eat with Jesus and his disciples.

11 And the Pharisees, seeing this, said to his disciples, “Why does your Teacher eat with tax collectors and sinners?”

12 But Jesus, hearing this, said: “It is not those who are healthy who are in need of a physician, but those who have maladies.

13 So then, go out and learn what this means: ‘I desire mercy and not sacrifice.’ For I have not come to call the just, but sinners.”

14 Then the disciples of John drew near to him, saying, “Why do we and the Pharisees fast frequently, but your disciples do not fast?”

15 And Jesus said to them: “How can the sons of the groom mourn, while the groom is still with them? But the days will arrive when the groom will be taken away from them. And then they shall fast.

16 For no one would sew a patch of new cloth onto an old garment. For it pulls its fullness away from the garment, and the tear is made worse.

18 As he was speaking these things to them, behold, a certain ruler approached and adored him, saying: “Lord, my daughter has recently passed away. But come and impose your hand upon her, and she will live.”

19 And Jesus, rising up, followed him, with his disciples.

20 And behold, a woman, who had suffered from a flow of blood for twelve years, approached from behind and touched the hem of his garment.

21 For she said within herself, “If I will touch even his garment, I shall be saved.”

22 But Jesus, turning and seeing her, said: “Be strengthened in faith, daughter; your faith has made you well.” And the woman was made well from that hour.

23 And when Jesus had arrived in the house of the ruler, and he had seen the musicians and the tumultuous crowd,

24 he said, “Depart. For the girl is not dead, but asleep.” And they derided him.

25 And when the crowd had been sent away, he entered. And he took her by the hand. And the girl rose up.

26 And the news of this went out to that entire land.

27 And as Jesus passed from there, two blind men followed him, crying out and saying, “Take pity on us, Son of David.”