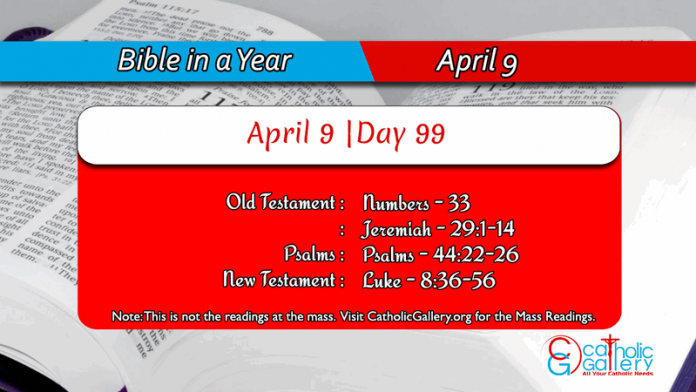 1 These are the lodging places of the sons of Israel, who departed from Egypt by their companies under the hand of Moses and Aaron,

2 which Moses wrote down according to the places of the encampments, which they changed upon the order of the Lord.

4 And these were burying their firstborn, whom the Lord had struck down (for so, too, did he carry out retribution against their gods).

5 And they made camp at Soccoth.

6 And from Soccoth they went to Etham, which is at the furthest limits of the wilderness.

7 Departing from there, they arrived opposite Pi-hahiroth, which looks out toward Baal-zephon, and they were encamped before Migdol.

8 And setting out from Pi-hahiroth, they crossed through the middle of the Sea into the wilderness. And having walked for three days through the desert of Etham, they made camp at Marah.

9 And setting out from Marah, they arrived at Elim, where there were twelve fountains of water and seventy palm trees. And they set up camp there.

10 But departing from there also, they fixed their tents above the Red Sea. And setting out from the Red Sea,

11 they were encamped in the desert of Sin.

12 Departing from there, they went to Dophkah.

13 And setting out from Dophkah, they made camp at Alush.

14 And departing from Alush, they fixed their tents at Rephidim, where the people lacked water to drink.

15 And setting out from Rephidim, they camped in the desert of Sinai.

16 But departing also from the wilderness of the Sinai, they arrived at the Graves of Lust.

17 And setting out from the Graves of Lust, they were encamped at Hazeroth.

19 And setting out from Rithmah, they made camp at Rimmon-perez.

20 And departing from there, they arrived at Libnah.

21 From Libnah, they made camp at Rissah.

23 Setting out from there, they were encamped at mount Shepher.

24 Departing from mount Shepher, they went to Haradah.

25 Continuing on from there, they made camp at Makheloth.

26 And setting out from Makheloth, they went to Tahath.

27 From Tahath, they made camp at Terah.

28 Departing from there, they pitched their tents at Mithkah.

32 And setting out from Bene-jaakan, they went to mount Gidgad.

33 Setting out from there, they were encamped at Jotbathah.

36 Setting out from there, they went into the desert of Sin, which is Kadesh.

37 And departing from Kadesh, they encamped at mount Hor, at the furthermost limits of the land of Edom.

38 And Aaron the priest ascended onto mount Hor, by the order of the Lord. And there he died, in the fortieth year of the departure of the sons of Israel from Egypt, in the fifth month, on the first day of the month,

39 when he was one hundred twenty-three years old.

40 And king Arad the Canaanite, who lived toward the south, heard that the sons of Israel had arrived in the land of Canaan.

41 And setting out from mount Hor, they made camp at Zalmonah.

42 Departing from there, they went to Punon.

43 And setting out from Punon, they were encamped at Oboth.

44 And from Oboth, they went to Iye-abarim, which is at the borders of the Moabites.

45 And setting out from Iye-abarim, they fixed their tents at Dibon-gad.

46 Departing from there, they made camp at Almon-diblathaim.

47 And departing from Almon-diblathaim, they went to the mountains of Abarim, opposite Nebo.

48 And setting out from the mountains of Abarim, they crossed over to the plains of Moab, above the Jordan, opposite Jericho.

49 And they made camp there, from Beth-jeshimoth all the way to Abel-shittim, in the level places of the Moabites,

50 where the Lord said to Moses:

51 Instruct the sons of Israel, and say to them: When you will have crossed over the Jordan, entering into the land of Canaan,

52 destroy all the inhabitants of that land. Break their monuments, and shatter their statues, and lay waste to every exalted thing,

53 cleansing the land and living in it. For I have given it you as a possession,

54 which you shall divide among you by lot. To the greater number you shall give more, and to the lesser number, less. To each one, just as the lot shall fall, so shall the inheritance be distributed. The possession shall be divided by the tribes and families.

55 But if you are not willing to put to death the inhabitants of the land, those who remain shall be to you like spikes in your eyes and lances in your sides, and they shall be adversaries to you in the land of your habitation.

2 after king Jeconiah, with the queen, and the eunuchs, and the leaders of Judah and of Jerusalem, and the craftsmen and engravers, had departed from Jerusalem.

4 Thus says the Lord of hosts, the God of Israel, to all who have been taken away, whom I have caused to be transferred from Jerusalem to Babylon:

5 Build houses and live in them. And plant gardens, and eat from their fruit.

7 And seek the peace of the city, to which I have caused you to be taken away, and pray to the Lord on its behalf. For your peace will be in its peace.

8 For thus says the Lord of hosts, the God of Israel: Do not allow your prophets and your diviners, who are in your midst, to seduce you. And you should pay no attention to your dreams, which you are dreaming.

9 For they prophesy falsely to you in my name, and I have not sent them, says the Lord.

10 For thus says the Lord: When the seventy years will begin to be completed in Babylon, I will visit you. And I will raise up over you my good word, so that I may lead you back to this place.

11 For I know the thoughts that I think over you, says the Lord: thoughts of peace and not of affliction, so that I may give you patience and an end.

13 You shall seek me. And you will find me, when you have sought me with your whole heart.

22 Shall not God search out these things: for he knoweth the secrets of the heart. Because for thy sake we are killed all the day long: we are counted as sheep for the slaughter.

23 Arise, why sleepest thou, O Lord? arise, and cast us not off to the end.

24 Why turnest thou face away? and forgettest our want and our trouble?

25 For our soul is humbled down to the dust: our belly cleaveth to the earth.

26 Arise, O Lord, help us and redeem us for thy name’s sake.

36 Then those who had seen this also reported to them how he had been healed from the legion.

37 And the entire multitude from the region of the Gerasenes pleaded with him to depart from them. For they were seized by a great fear. Then, climbing into the boat, he went back again.

38 And the man from whom the demons had departed pleaded with him, so that he might be with him. But Jesus sent him away, saying,

39 Return to your house and explain to them what great things God has done for you. And he traveled through the entire city, preaching about the great things that Jesus had done for him.

40 Now it happened that, when Jesus had returned, the crowd received him. For they were all waiting for him.

41 And behold, a man came, whose name was Jairus, and he was a leader of the synagogue. And he fell down at the feet of Jesus, asking him to enter into his house.

42 For he had an only daughter, nearly twelve years old, and she was dying. And it happened that, as he was going there, he was hemmed in by the crowd.

43 And there was a certain woman, with a flow of blood for twelve years, who had paid out all her substance on physicians, and she was unable to be cured by any of them.

44 She approached him from behind, and she touched the hem of his garment. And at once the flow of her blood stopped.

45 And Jesus said, “Who is it that touched me?” But as everyone was denying it, Peter, and those who were with him, said: “Teacher, the crowd hems you in and presses upon you, and yet you say, ‘Who touched me?’ “

46 And Jesus said: “Someone has touched me. For I know that power has gone out from me.”

47 Then the woman, upon seeing that she was not hidden, came forward, trembling, and she fell down before his feet. And she declared before all the people the reason that she had touched him, and how she had been immediately healed.

49 While he was still speaking, someone came to the ruler of the synagogue, saying to him: “Your daughter is dead. Do not trouble him.”

50 Then Jesus, upon hearing this word, replied to the father of the girl: “Do not be afraid. Only believe, and she will be saved.”

51 And when he had arrived at the house, he would not permit anyone to enter with him, except Peter and James and John, and the father and mother of the girl.

52 Now all were weeping and mourning for her. But he said: “Do not weep. The girl is not dead, but only sleeping.”

53 And they derided him, knowing that she had died.

55 And her spirit returned, and she immediately rose up. And he ordered them to give her something to eat.

56 And her parents were stupefied. And he instructed them not to tell anyone what had happened.

◄ April 8 April 10 ►
Bible in a year – Index
March May June
Simplest Bible in a Year plan compiled using the “Catholic Public Domain Version Bible“. This is not the Readings at the Mass. For the Mass Readings, check the Mass Readings taken from the New Jerusalem Bible or the Douay-Rheims Catholic Bible.
By Pradeep Augustine
Print
Facebook
WhatsApp
Twitter
Pinterest
Linkedin
Email
Telegram
LINE
Viber