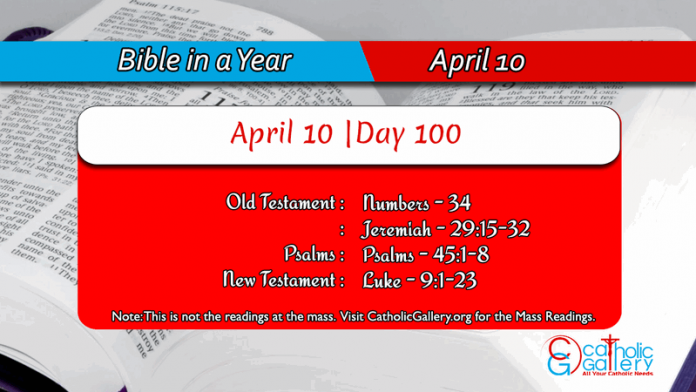 1 And the Lord spoke to Moses, saying:

2 Instruct the sons of Israel, and you shall say to them: When you will have entered into the land of Canaan, and it has fallen into your possession by lot, it shall be bound by these limits:

3 The southern part shall begin from the wilderness of Sin, which is next to Edom, and it shall have the Sea of Salt as a limit to the east.

4 It shall circle on the south side along the ascent of the Scorpion, by this way crossing into Senna, and passing through, from the south, as far as Kadesh-barnea, from which its confines shall go out to the town called Adar, and extend even to Azmon.

5 And its limits shall go around from Azmon to the Torrent of Egypt, and shall end at the shore of the Great Sea.

6 Then the western region shall begin from the Great Sea, and the same shall be its end.

7 Furthermore, toward the northern region, its limits shall begin from the Great Sea, passing through even to the highest mountain.

8 From there, it limits shall advance into Hamath, as far as the limits of Zedad.

9 And its confines shall go all the way to Ziphron, and to the village of Enan. These shall be the limits on the northern side.

10 From there, its limits shall be measured, facing the east side, from the village of Enan as far as Shepham.

12 and shall extend as far as the Jordan, and, at the furthest extent, shall be enclosed by the Sea of Salt. You shall have this land, with its borders all around.”

13 And Moses instructed the sons of Israel, saying: “This shall be the land which you shall possess by lot, and which the Lord has ordered to be given to the nine tribes, and to the half tribe.

15 that is, two and a half tribes, have received their portion across the Jordan, opposite Jericho, toward the eastern side.”

16 And the Lord said to Moses:

17 These are the names of the men, who shall divide the land for you: Eleazar the priest, and Joshua the son of Nun,

18 and one leader from each tribe,

19 whose names are these: from the tribe of Judah, Caleb the son of Jephunneh;

20 from the tribe of Simeon, Samuel the son of Ammihud;

21 from the tribe of Benjamin, Elidad the son of Chislon;

22 from the tribe of the sons of Dan, Bukki the son of Jogli;

23 of the sons of Joseph, from the tribe of Manasseh, Hanniel the son of Ephod;

24 from the tribe of Ephraim, Kemuel the son of Shiphtan;

25 from the tribe of Zebulon, Elizaphan the son of Parnach;

26 from the tribe of Issachar, Paltiel the leader, the son of Azzan;

27 from the tribe of Asher, Ahihud the son of Shelomi;

28 from the tribe of Naphtali, Pedahel the son of Ammihud.”

29 These are the ones that the Lord has ordered to divide the land of Canaan to the sons of Israel.

15 For you have said: ‘The Lord has raised up prophets for us in Babylon.’

16 For thus says the Lord, to the king who sits upon the throne of David, and to all the people who live in this city, to your brothers who have not departed with you in the transmigration:

17 Thus says the Lord of hosts: Behold, I will send among them the sword, and famine, and pestilence. And I will make them like the bad figs, which cannot be eaten, because they are very bad.

18 And I will pursue them with the sword, and with famine, and with pestilence. And I will give them over to affliction, amid all the kingdoms of the earth: as a curse, and in stupor, and with hissing, and as a disgrace among all the nations to which I have driven them out.

20 Therefore, listen to the word of the Lord, all you of the transmigration, whom I have sent away from Jerusalem into Babylon.

21 Thus says the Lord of hosts, the God of Israel, to Ahab, the son of Kolaiah, and to Zedekiah, the son of Maaseiah, who prophesy falsely to you in my name: Behold, I will deliver them into the hands of Nebuchadnezzar, the king of Babylon, and he will strike them down before your eyes.

22 And a curse will be taken up about them, by all the captives of Judah that are in Babylon, saying: ‘May the Lord make you like Zedekiah, and like Ahab, whom the king of Babylon fried in the fire!’

23 For they have acted foolishly in Israel, and they have committed adultery with the wives of their friends, and they have spoken lying words in my name, which I did not command them. I am the Judge and the Witness, says the Lord.

24 And to Shemaiah of Nehelam, you shall say:

25 Thus says the Lord of hosts, the God of Israel: Similarly, you have sent letters in your name to all the people that are in Jerusalem, and to Zephaniah, the son of Maaseiah, the priest, and to all the priests, saying:

26 ‘The Lord has made you priest in place of Jehoiada, the priest, so that you would be the ruler in the house of the Lord over every man who raves and prophesies, to send him to the stocks and to prison.

27 And now why have you not rebuked Jeremiah of Anathoth, who prophesies to you?

28 For about this, he has sent to us in Babylon, saying: It is a long time. Build houses and live in them. And plant gardens, and eat from their fruits.’ “

29 Thus, Zephaniah, the priest, read this letter, in the hearing of Jeremiah the prophet.

30 And the word of the Lord came to Jeremiah, saying:

31 Send to all those of the transmigration, saying: Thus says the Lord to Shemaiah of Nehelam: Because Shemaiah has prophesied to you, though I did not send him, and because he has caused you to trust in a lie:

32 For this reason, thus says the Lord: Behold, I will visit upon Shemaiah of Nehelam, and upon his offspring. There will not be, for him, even one man sitting in the midst of this people. And he will not see the good that I will accomplish for my people, says the Lord. For he has spoken a betrayal against the Lord.”

1 Unto the end, for them that shall be changed, for the sons of Core, for understanding. A canticle for the Beloved.

2 My heart hath uttered a good word I speak my works to the king; My tongue is the pen of a scrivener that writeth swiftly.

3 Thou art beautiful above the sons of men: grace is poured abroad in thy lips; therefore hath God blessed thee for ever.

4 Gird thy sword upon thy thigh, O thou most mighty.

5 With thy comeliness and thy beauty set out, proceed prosperously, and reign. Because of truth and meekness and justice: and thy right hand shall conduct thee wonderfully.

6 Thy arrows are sharp: under thee shall people fall, into the hearts of the king’s enemies.

7 Thy throne, O God, is for ever and ever: the sceptre of thy kingdom is a sceptre of uprightness.

8 Thou hast loved justice, and hated iniquity: therefore God, thy God, hath anointed thee with the oil of gladness above thy fellows.

1 Then calling together the twelve Apostles, he gave them power and authority over all demons and to cure diseases.

2 And he sent them to preach the kingdom of God and to heal the infirm.

3 And he said to them: “You should take nothing for the journey, neither staff, nor traveling bag, nor bread, nor money; and you should not have two tunics.

4 And into whatever house you shall enter, lodge there, and do not move away from there.

5 And whoever will not have received you, upon departing from that city, shake off even the dust on your feet, as a testimony against them.”

6 And going forth, they traveled around, through the towns, evangelizing and curing everywhere.

7 Now Herod the tetrarch heard about all the things that were being done by him, but he doubted, because it was said

8 by some, “For John has risen from the dead,” yet truly, by others, “For Elijah has appeared,” and by still others, “For one of the prophets from of old has risen again.”

9 And Herod said: “I beheaded John. So then, who is this, about whom I hear such things?” And he sought to see him.

10 And when the Apostles returned, they explained to him all the things that they had done. And taking them with him, he withdrew to a deserted place apart, which belongs to Bethsaida.

11 But when the crowd had realized this, they followed him. And he received them and spoke to them about the kingdom of God. And those who were in need of cures, he healed.

12 Then the day began to decline. And drawing near, the twelve said to him: “Dismiss the crowds, so that, by going into the surrounding towns and villages, they may separate and find food. For we are here in a deserted place.”

13 But he said to them, “You give them something to eat.” And they said, “There is with us no more than five loaves and two fish, unless perhaps we are to go and buy food for this entire multitude.”

14 Now there were about five thousand men. So he said to his disciples, “Have them recline to eat in groups of fifty.”

15 And they did so. And they caused them all to recline to eat.

16 Then, taking the five loaves and the two fish, he gazed up to heaven, and he blessed and broke and distributed them to his disciples, in order to set them before the crowd.

17 And they all ate and were satisfied. And twelve baskets of fragments were taken up, which were left over from them.

18 And it happened that, when he was praying alone, his disciples also were with him, and he questioned them, saying: “Who do the multitudes say that I am?”

19 But they answered by saying: “John the Baptist. But some say Elijah. Yet truly, others say that one of the prophets from before has risen again.”

21 But speaking sharply to them, he instructed them not to tell this to anyone,

22 saying, “For the Son of man must suffer many things, and be rejected by the elders and the leaders of the priests and the scribes, and be killed, and on the third day rise again.”

23 Then he said to everyone: “If anyone is willing to come after me: let him deny himself, and take up his cross every day, and follow me.

◄ April 9 April 11 ►
Bible in a year – Index
March May June
Simplest Bible in a Year plan compiled using the “Catholic Public Domain Version Bible“. This is not the Readings at the Mass. For the Mass Readings, check the Mass Readings taken from the New Jerusalem Bible or the Douay-Rheims Catholic Bible.
By Pradeep Augustine
Print
Facebook
WhatsApp
Twitter
Pinterest