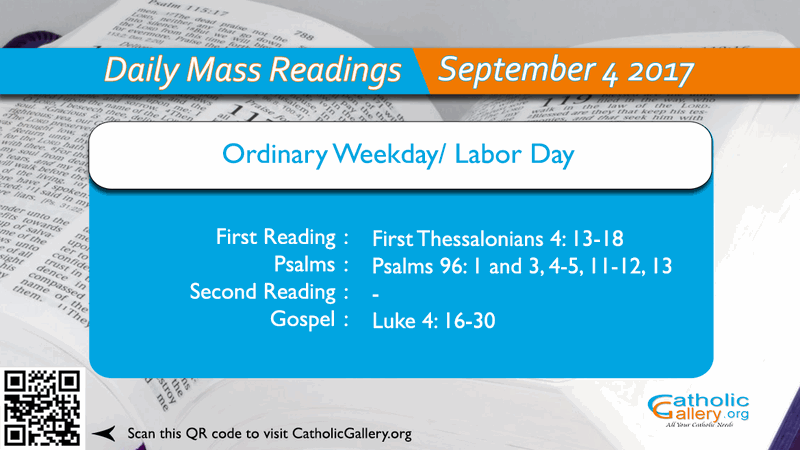 13 And we will not have you ignorant, brethren, concerning them that are asleep, that you be not sorrowful, even as others who have no hope.

14 For if we believe that Jesus died, and rose again; even so them who have slept through Jesus, will God bring with him.

15 For this we say unto you in the word of the Lord, that we who are alive, who remain unto the coming of the Lord, shall not prevent them who have slept.

16 For the Lord himself shall come down from heaven with commandment, and with the voice of an archangel, and with the trumpet of God: and the dead who are in Christ, shall rise first.

17 Then we who are alive, who are left, shall be taken up together with them in the clouds to meet Christ, into the air, and so shall we be always with the Lord.

18 Wherefore, comfort ye one another with these words.

1 A canticle for David himself, when the house was built after the captivity. Sing ye to the Lord a new canticle: sing to the Lord, all the earth.

3 Declare his glory among the Gentiles: his wonders among all people.

4 For the Lord is great, and exceedingly to be praised: he is to be feared above all gods.

5 For all the gods of the Gentiles are devils: but the Lord made the heavens.

11 Let the heavens rejoice, and let the earth be glad, let the sea be moved, and the fulness thereof:

12 The fields and all things that are in them shall be joyful. Then shall all the trees of the woods rejoice

16 And he came to Nazareth, where he was brought up: and he went into the synagogue, according to his custom, on the sabbath day; and he rose up to read.

17 And the book of Isaias the prophet was delivered unto him. And as he unfolded the book, he found the place where it was written:

18 The Spirit of the Lord is upon me. Wherefore he hath anointed me to preach the gospel to the poor, he hath sent me to heal the contrite of heart,

19 To preach deliverance to the captives, and sight to the blind, to set at liberty them that are bruised, to preach the acceptable year of the Lord, and the day of reward.

20 And when he had folded the book, he restored it to the minister, and sat down. And the eyes of all in the synagogue were fixed on him.

21 And he began to say to them: This day is fulfilled this scripture in your ears.

22 And all gave testimony to him: and they wondered at the words of grace that proceeded from his mouth, and they said: Is not this the son of Joseph?

23 And he said to them: Doubtless you will say to me this similitude: Physician, heal thyself: as great things as we have heard done in Capharnaum, do also here in thy own country.

The readings on this page are taken from the Douay-Rheims Catholic Bible. You can also read the Mass Readings taken from the New Jerusalem Bible, which is used at Mass in most of the English-speaking world. (References, Copyrights).
◄ September 3September 5 ►
ByPradeep Augustine
Print
Facebook
WhatsApp
Twitter
Pinterest
Linkedin
Email
Telegram
LINE
Viber