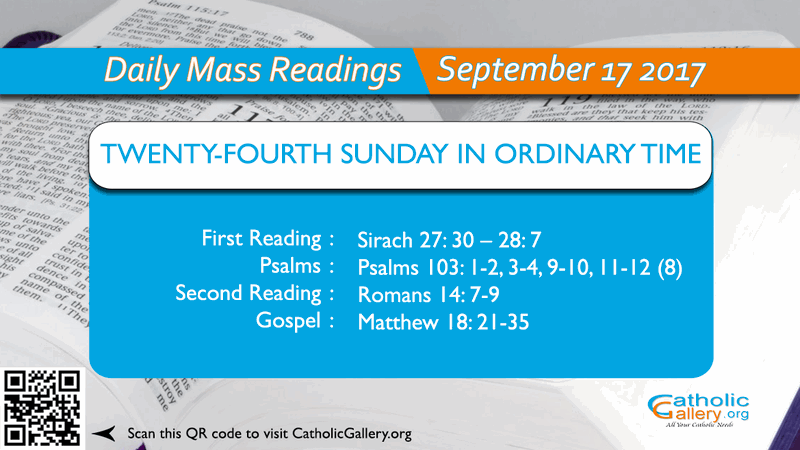 30 Anger and fury are both of them abominable, and the sinful man shall be subject to them.

28:1 He that seeketh to revenge himself, shall find vengeance from the Lord, and he will surely keep his sins in remembrance.

2 Forgive thy neighbour if he hath hurl thee: and then shall thy sins be forgiven to thee when thou prayest.

3 Man to man reserveth anger, and doth he seek remedy of God?

4 He hath no mercy on a man like himself, and doth he entreat for his own sins?

5 He that is but flesh, nourisheth anger, and doth he ask forgiveness of God? who shall obtain pardon for his sins?

6 Remember thy last things, and let enmity cease: For corruption and death hang over in his commandments.

1 For David himself. Bless the Lord, O my soul: and let all that is within me bless his holy name.

2 Bless the Lord, O my soul, and never forget all he hath done for thee.

4 Who redeemeth thy life from destruction: who crowneth thee with mercy and compassion.

9 He will not always be angry: nor will he threaten for ever.

11 For according to the height of the heaven above the earth: he hath strengthened his mercy towards them that fear him.

12 As far as the east is from the west, so far hath he removed our iniquities from us.

(8 The Lord is compassionate and merciful: longsuffering and plenteous in mercy.)

9 For to this end Christ died and rose again; that he might be Lord both of the dead and of the living.

21 Then came Peter unto him and said: Lord, how often shall my brother offend against me, and I forgive him? till seven times?

23 Therefore is the kingdom of heaven likened to a king, who would take an account of his servants.

24 And when he had begun to take the account, one was brought to him, that owed him ten thousand talents.

25 And as he had not wherewith to pay it, his lord commanded that he should be sold, and his wife and children and all that he had, and payment to be made.

26 But that servant falling down, besought him, saying: Have patience with me, and I will pay thee all.

27 And the lord of that servant being moved with pity, let him go and forgave him the debt.

28 But when that servant was gone out, he found one of his fellow servants that owed him an hundred pence: and laying hold of him, throttled him, saying: Pay what thou owest.

29 And his fellow servant falling down, besought him, saying: Have patience with me, and I will pay thee all.

30 And he would not: but went and cast him into prison, till he paid the debt.

31 Now his fellow servants seeing what was done, were very much grieved, and they came and told their lord all that was done.

32 Then his lord called him; and said to him: Thou wicked servant, I forgave thee all the debt, because thou besoughtest me:

34 And his lord being angry, delivered him to the torturers until he paid all the debt.

35 So also shall my heavenly Father do to you, if you forgive not every one his brother from your hearts.

The readings on this page are taken from the Douay-Rheims Catholic Bible. You can also read the Mass Readings taken from the New Jerusalem Bible, which is used at Mass in most of the English-speaking world. (References, Copyrights).
◄ September 16September 18 ►
ByPradeep Augustine
Print
Facebook
WhatsApp
Twitter
Pinterest
Linkedin
Email
Telegram
LINE
Viber