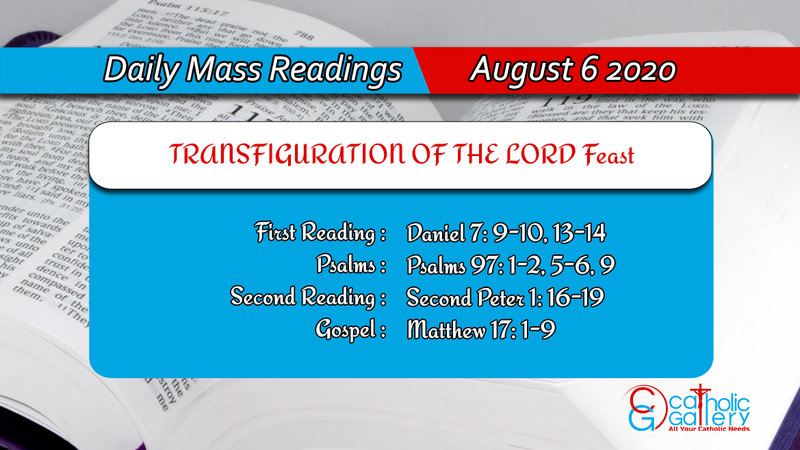 TRANSFIGURATION OF THE LORD Feast

2 Clouds and darkness are round about him: justice and judgment are the establishment of his throne.

9 For thou art the most high Lord over all the earth: thou art exalted exceedingly above all gods.

16 For we have not by following artificial fables, made known to you the power, and presence of our Lord Jesus Christ; but we were eyewitnesses of his greatness.

17 For he received from God the Father, honour and glory: this voice coming down to him from the excellent glory: This is my beloved Son, in whom I am well pleased; hear ye him.

18 And this voice we heard brought from heaven, when we were with him in the holy mount.

19 And we have the more firm prophetical word: whereunto you do well to attend, as to a light that shineth in a dark place, until the day dawn, and the day star arise in your hearts:

1 And after six days Jesus taketh unto him Peter and James, and John his brother, and bringeth them up into a high mountain apart:

2 And he was transfigured before them. And his face did shine as the sun: and his garments became white as snow.

3 And behold there appeared to them Moses and Elias talking with him.

4 And Peter answering, said to Jesus: Lord, it is good for us to be here: if thou wilt, let us make here three tabernacles, one for thee, and one for Moses, and one for Elias.

5 And as he was yet speaking, behold a bright cloud overshadowed them. And lo, a voice out of the cloud, saying: This is my beloved Son, in whom I am well pleased: hear ye him.

6 And the disciples hearing, fell upon their face, and were very much afraid.

7 And Jesus came and touched them: and said to them, Arise, and fear not.

8 And they lifting up their eyes saw no one but only Jesus.

9 And as they came down from the mountain, Jesus charged them, saying: Tell the vision to no man, till the Son of man be risen from the dead.

The readings on this page are taken from the Douay-Rheims Catholic Bible. You can also read the Mass Readings taken from the New Jerusalem Bible, which is used at Mass in most of the English-speaking world. (References, Copyrights).
◄ August – 5August – 7 ►
ByPradeep Augustine
Print
Facebook
WhatsApp
Twitter
Pinterest
Linkedin
Email
Telegram
LINE
Viber