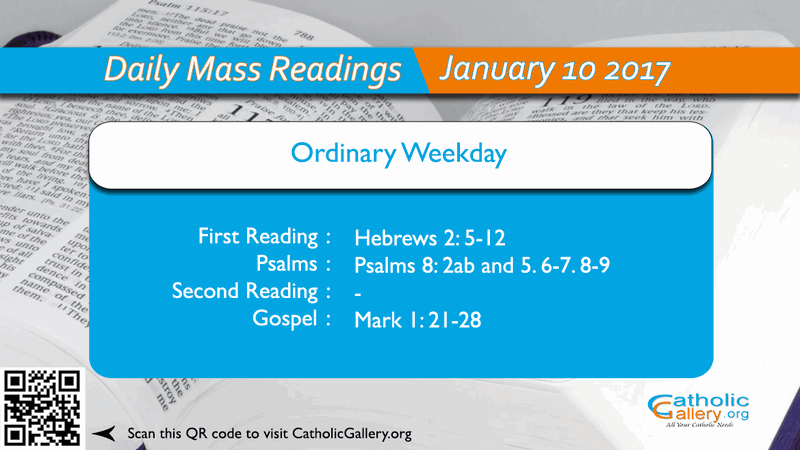 5 For God hath not subjected unto angels the world to come, whereof we speak.

7 Thou hast made him a little lower than the angels: thou hast crowned him with glory and honour, and hast set him over the works of thy hands:

9 But we see Jesus, who was made a little lower than the angels, for the suffering of death, crowned with glory and honour: that, through the grace of God, he might taste death for all.

11 For both he that sanctifieth, and they who are sanctified, are all of one. For which cause he is not ashamed to call them brethren, saying:

12 I will declare thy name to my brethren; in the midst of the church will I praise thee.

2 O Lord our Lord, how admirable is thy name in the whole earth! For thy magnificence is elevated above the heavens.

21 And they entered into Capharnaum, and forthwith upon the sabbath days going into the synagogue, he taught them.

22 And they were astonished at his doctrine. For he was teaching them as one having power, and not as the scribes.

23 And there was in their synagogue a man with an unclean spirit; and he cried out,

24 Saying: What have we to do with thee, Jesus of Nazareth? art thou come to destroy us? I know who thou art, the Holy One of God.

25 And Jesus threatened him, saying: Speak no more, and go out of the man.

26 And the unclean spirit tearing him, and crying out with a loud voice, went out of him.

27 And they were all amazed, insomuch that they questioned among themselves, saying: What thing is this? what is this new doctrine? for with power he commandeth even the unclean spirits, and they obey him.

28 And the fame of him was spread forthwith into all the country of Galilee.

The readings on this page are taken from the Douay-Rheims Catholic Bible. You can also read the Mass Readings taken from the New Jerusalem Bible, which is used at Mass in most of the English-speaking world. (References, Copyrights).
◄ January 9January 11 ►
ByPradeep Augustine
Print
Facebook
WhatsApp
Twitter
Pinterest
Linkedin
Email
Telegram
LINE
Viber