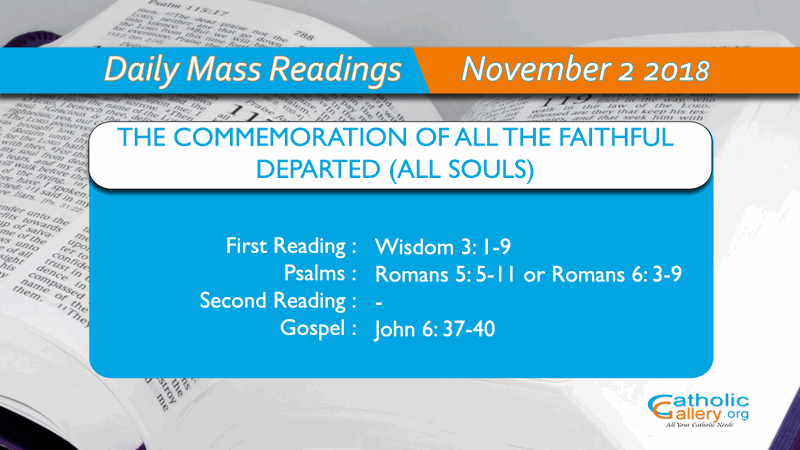 THE COMMEMORATION OF ALL THE FAITHFUL DEPARTED (ALL SOULS)

1 But the souls of the just are in the hand of God, and the torment of death shall not touch them.

2 In the sight of the unwise they seemed to die: and their departure was taken for misery:

3 And their going away from us, for utter destruction: but they are in peace.

4 And though in the sight of men they suffered torments, their hope is full of immortality.

5 Afflicted in few things, in many they shall be well rewarded: because God hath tried them, and found them worthy of himself.

6 As gold in the furnace he hath proved them, and as a victim of a holocaust he hath received them, and in time there shall be respect had to them.

7 The just shall shine, and shall run to and fro like sparks among the reeds.

8 They shall judge nations, and rule over people, and their Lord shall reign for ever.

9 They that trust in him, shall understand the truth: and they that are faithful in love shall rest in him: for grace and peace is to his elect.

5 And hope confoundeth not: because the charity of God is poured forth in our hearts, by the Holy Ghost, who is given to us.

6 For why did Christ, when as yet we were weak, according to the time, die for the ungodly?

7 For scarce for a just man will one die; yet perhaps for a good man some one would dare to die.

8 But God commendeth his charity towards us; because when as yet we were sinners, according to the time,

9 Christ died for us; much more therefore, being now justified by his blood, shall we be saved from wrath through him.

10 For if, when we were enemies, we were reconciled to God by the death of his Son; much more, being reconciled, shall we be saved by his life.

11 And not only so; but also we glory in God, through our Lord Jesus Christ, by whom we have now received reconciliation.

4 For we are buried together with him by baptism into death; that as Christ is risen from the dead by the glory of the Father, so we also may walk in newness of life.

6 Knowing this, that our old man is crucified with him, that the body of sin may be destroyed, to the end that we may serve sin no longer.

7 For he that is dead is justified from sin.

8 Now if we be dead with Christ, we believe that we shall live also together with Christ:

9 Knowing that Christ rising again from the dead, dieth now no more, death shall no more have dominion over him.

37 All that the Father giveth to me shall come to me; and him that cometh to me, I will not cast out.

38 Because I came down from heaven, not to do my own will, but the will of him that sent me.

39 Now this is the will of the Father who sent me: that of all that he hath given me, I should lose nothing; but should raise it up again in the last day.

40 And this is the will of my Father that sent me: that every one who seeth the Son, and believeth in him, may have life everlasting, and I will raise him up in the last day.

The readings on this page are taken from the Douay-Rheims Catholic Bible. You can also read the Mass Readings taken from the New Jerusalem Bible, which is used at Mass in most of the English-speaking world. (References, Copyrights).
◄ November 1November 3 ►
ByPradeep Augustine
Print
Facebook
WhatsApp
Twitter
Pinterest
Linkedin
Email
Telegram
LINE
Viber