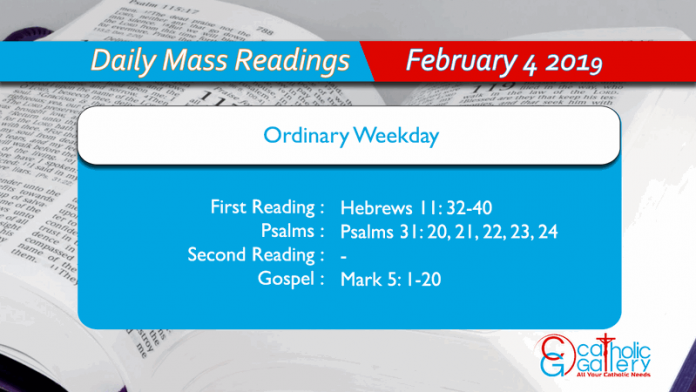 32 And what shall I yet say? For the time would fail me to tell of Gedeon, Barac, Samson, Jephthe, David, Samuel, and the prophets:

34 Quenched the violence of fire, escaped the edge of the sword, recovered strength from weakness, became valiant in battle, put to flight the armies of foreigners:

35 Women received their dead raised to life again. But others were racked, not accepting deliverance, that they might find a better resurrection.

36 And others had trial of mockeries and stripes, moreover also of bands and prisons.

37 They were stoned, they were cut asunder, they were tempted, they were put to death by the sword, they wandered about in sheepskins, in goatskins, being in want, distressed, afflicted:

38 Of whom the world was not worthy; wandering in deserts, in mountains, and in dens, and in caves of the earth.

39 And all these being approved by the testimony of faith, received not the promise;

40 God providing some better thing for us, that they should not be perfected without us.

21 Thou shalt hide them in the secret of thy face, from the disturbance of men. Thou shalt protect them in thy tabernacle from the contradiction of tongues.

22 Blessed be the Lord, for he hath shewn his wonderful mercy to me in a fortified city.

23 But I said in the excess of my mind: I am cast away from before thy eyes. Therefore thou hast heard the voice of my prayer, when I cried to thee.

24 O love the Lord, all ye his saints: for the Lord will require truth, and will repay them abundantly that act proudly.

The readings on this page are taken from the Douay-Rheims Catholic Bible. You can also read the Mass Readings taken from the New Jerusalem Bible, which is used at Mass in most of the English-speaking world. (References, Copyrights).
◄ February – 3 February – 5 ►
By Pradeep Augustine
Print
Facebook
WhatsApp
Twitter
Pinterest
Linkedin
Email
Telegram
LINE
Viber