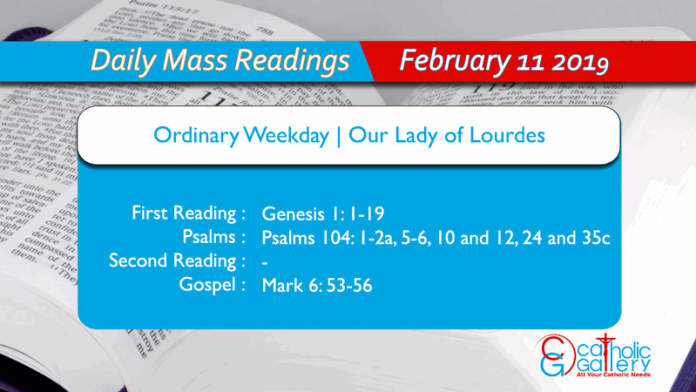 Ordinary Weekday | Our Lady of Lourdes

1 In the beginning, God created heaven and earth.

2 And the earth was void and empty, and darkness was upon the face of the deep; and the spirit of God moved over the waters.

3 And God said: Be light made. And light was made.

4 And God saw the light that it was good; and he divided the light from the darkness.

5 And he called the light Day, and the darkness Night; and there was evening and morning one day.

6 And God said: Let there be a firmament made amidst the waters: and let it divide the waters from the waters.

8 And God called the firmament, Heaven; and the evening and morning were the second day.

9 God also said: Let the waters that are under the heaven, be gathered together into one place: and let the dry land appear. And it was so done.

10 And God called the dry land, Earth; and the gathering together of the waters, he called Seas. And God saw that it was good.

11 And he said: Let the earth bring forth the green herb, and such as may seed, and the fruit tree yielding fruit after its kind, which may have seed in itself upon the earth. And it was so done.

13 And the evening and the morning were the third day.

14 And God said: Let there be lights made in the firmament of heaven, to divide the day and the night, and let them be for signs, and for seasons, and for days and years:

15 To shine in the firmament of heaven, and to give light upon the earth. And it was so done.

17 And he set them in the firmament of heaven to shine upon the earth.

18 And to rule the day and the night, and to divide the light and the darkness. And God saw that it was good.

19 And the evening and morning were the fourth day.

1 For David himself. Bless the Lord, O my soul: O Lord my God, thou art exceedingly great. Thou hast put on praise and beauty:

2 And art clothed with light as with a garment. Who stretchest out the heaven like a pavilion:

5 Who hast founded the earth upon its own bases: it shall not be moved for ever and ever.

6 The deep like a garment is its clothing: above the mountains shall the waters stand.

10 Thou sendest forth springs in the vales: between the midst of the hills the waters shall pass.

12 Over them the birds of the air shall dwell: from the midst of the rocks they shall give forth their voices.

24 How great are thy works, O Lord? thou hast made all things in wisdom: the earth is filled with thy riches.

35 Let sinners be consumed out of the earth, and the unjust, so that they be no more: O my soul, bless thou the Lord.

53 And when they had passed over, they came into the land of Genezareth, and set to the shore.

54 And when they were gone out of the ship, immediately they knew him:

55 And running through that whole country, they began to carry about in beds those that were sick, where they heard he was.

56 And whithersoever he entered, into towns or into villages or cities, they laid the sick in the streets, and besought him that they might touch but the hem of his garment: and as many as touched him were made whole.

The readings on this page are taken from the Douay-Rheims Catholic Bible. You can also read the Mass Readings taken from the New Jerusalem Bible, which is used at Mass in most of the English-speaking world. (References, Copyrights).
◄ February – 10 February – 12 ►
By Pradeep Augustine
Print
Facebook
WhatsApp
Twitter
Pinterest
Linkedin
Email
Telegram
LINE
Viber