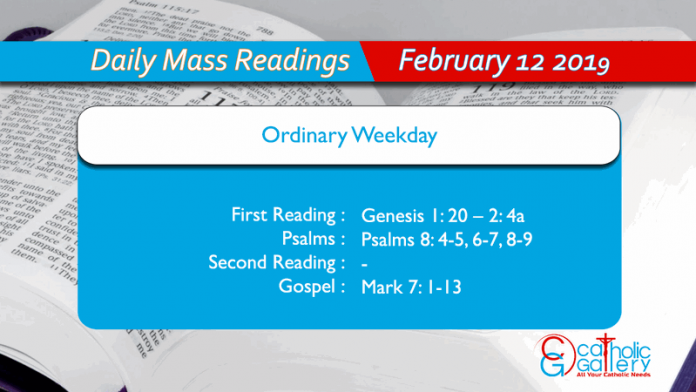 20 God also said: Let the waters bring forth the creeping creature having life, and the fowl that may fly over the earth under the firmament of heaven.

21 And God created the great whales, and every living and moving creature, which the waters brought forth, according to their kinds, and every winged fowl according to its kind. And God saw that it was good.

22 And he blessed them, saying: Increase and multiply, and fill the waters of the sea: and let the birds be multiplied upon the earth.

23 And the evening and morning were the fifth day.

24 And God said: Let the earth bring forth the living creature in its kind, cattle and creeping things, and beasts of the earth, according to their kinds. And it was so done.

25 And God made the beasts of the earth according to their kinds, and cattle, and every thing that creepeth on the earth after its kind. And God saw that it was good.

26 And he said: Let us make man to our image and likeness: and let him have dominion over the fishes of the sea, and the fowls of the air, and the beasts, and the whole earth, and every creeping creature that moveth upon the earth.

27 And God created man to his own image: to the image of God he created him: male and female he created them.

28 And God blessed them, saying: Increase and multiply, and fill the earth, and subdue it, and rule over the fishes of the sea, and the fowls of the air, and all living creatures that move upon the earth.

29 And God said: Behold I have given you every herb bearing seed upon the earth, and all trees that have in themselves seed of their own kind, to be your meat:

30 And to all beasts of the earth, and to every fowl of the air, and to all that move upon the earth, and wherein there is life, that they may have to feed upon. And it was so done.

31 And God saw all the things that he had made, and they were very good. And the evening and morning were the sixth day.

1 So the heavens and the earth were finished, and all the furniture of them.

3 And he blessed the seventh day, and sanctified it: because in it he had rested from all his work which God created and made.

4 For I will behold thy heavens, the works of thy fingers: the moon and the stars which thou hast founded.

1 And there assembled together unto him the Pharisees and some of the scribes, coming from Jerusalem.

2 And when they had seen some of his disciples eat bread with common, that is, with unwashed hands, they found fault.

3 For the Pharisees, and all the Jews eat not without often washing their hands, holding the tradition of the ancients:

4 And when they come from the market, unless they be washed, they eat not: and many other things there are that have been delivered to them to observe, the washings of cups and of pots, and of brazen vessels, and of beds.

5 And the Pharisees and scribes asked him: Why do not thy disciples walk according to the tradition of the ancients, but they eat bread with common hands?

6 But he answering, said to them: Well did Isaias prophesy of you hypocrites, as it is written: This people honoureth me with their lips, but their heart is far from me.

7 And in vain do they worship me, teaching doctrines and precepts of men.

8 For leaving the commandment of God, you hold the tradition of men, the washing of pots and of cups: and many other things you do like to these.

9 And he said to them: Well do you make void the commandment of God, that you may keep your own tradition.

10 For Moses said: Honour thy father and thy mother; and He that shall curse father or mother, dying let him die.

11 But you say: If a man shall say to his father or mother, Corban, (which is a gift,) whatsoever is from me, shall profit thee.

12 And further you suffer him not to do any thing for his father or mother,

13 Making void the word of God by your own tradition, which you have given forth. And many other such like things you do.

The readings on this page are taken from the Douay-Rheims Catholic Bible. You can also read the Mass Readings taken from the New Jerusalem Bible, which is used at Mass in most of the English-speaking world. (References, Copyrights).
◄ February – 11 February – 13 ►
By Pradeep Augustine
Print
Facebook
WhatsApp
Twitter
Pinterest
Linkedin
Email
Telegram
LINE
Viber