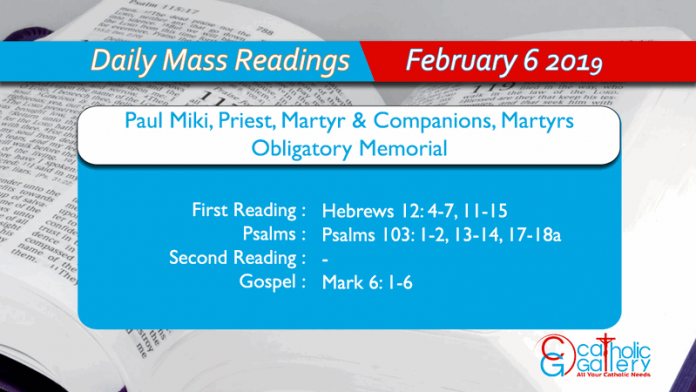 4 For you have not yet resisted unto blood, striving against sin:

5 And you have forgotten the consolation, which speaketh to you, as unto children, saying: My son, neglect not the discipline of the Lord; neither be thou wearied whilst thou art rebuked by him.

6 For whom the Lord loveth, he chastiseth; and he scourgeth every son whom he receiveth.

7 Persevere under discipline. God dealeth with you as with his sons; for what son is there, whom the father doth not correct?

11 Now all chastisement for the present indeed seemeth not to bring with it joy, but sorrow: but afterwards it will yield, to them that are exercised by it, the most peaceable fruit of justice.

12 Wherefore lift up the hands which hang down, and the feeble knees,

13 And make straight steps with your feet: that no one, halting, may go out of the way; but rather be healed.

14 Follow peace with all men, and holiness: without which no man shall see God.

15 Looking diligently, lest any man be wanting to the grace of God; lest any root of bitterness springing up do hinder, and by it many be defiled.

1 For David himself. Bless the Lord, O my soul: and let all that is within me bless his holy name.

2 Bless the Lord, O my soul, and never forget all he hath done for thee.

14 For he knoweth our frame. He remembereth that we are dust:

17 But the mercy of the Lord is from eternity and unto eternity upon them that fear him: And his justice unto children’s children,

18 To such as keep his covenant, And are mindful of his commandments to do them.

1 And going out from thence, he went into his own country; and his disciples followed him.

2 And when the sabbath was come, he began to teach in the synagogue: and many hearing him were in admiration at his doctrine, saying: How came this man by all these things? and what wisdom is this that is given to him, and such mighty works as are wrought by his hands?

3 Is not this the carpenter, the son of Mary, the brother of James, and Joseph, and Jude, and Simon? are not also his sisters here with us? And they were scandalized in regard of him.

4 And Jesus said to them: A prophet is not without honor, but in his own country, and in his own house, and among his own kindred.

5 And he could not do any miracles there, only that he cured a few that were sick, laying his hands upon them.

6 And he wondered because of their unbelief, and he went through the villages round about teaching.

The readings on this page are taken from the Douay-Rheims Catholic Bible. You can also read the Mass Readings taken from the New Jerusalem Bible, which is used at Mass in most of the English-speaking world. (References, Copyrights).
◄ February – 5 February – 7 ►
By Pradeep Augustine
Print
Facebook
WhatsApp
Twitter
Pinterest
Linkedin
Email
Telegram
LINE
Viber