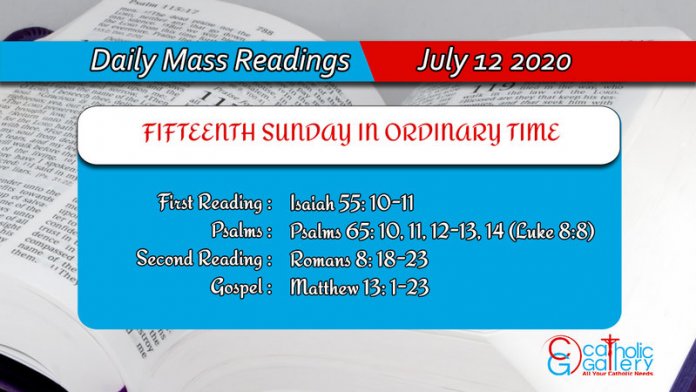 10 And as the rain and the snow come down from heaven, and return no more thither, but soak the earth, and water it, and make it to spring, and give seed to the sower, and bread to the eater:

11 So shall my word be, which shall go forth from my mouth: it shall not return to me void, but it shall do whatsoever I please, and shall prosper in the things for which I sent it.

10 Thou hast visited the earth, and hast plentifully watered it; thou hast many ways enriched it. The river of God is filled with water, thou hast prepared their food: for so is its preparation.

11 Fill up plentifully the streams thereof, multiply its fruits; it shall spring up and rejoice in its showers.

12 Thou shalt bless the crown of the year of thy goodness: and thy fields shall be filled with plenty.

13 The beautiful places of the wilderness shall grow fat: and the hills shall be girded about with joy,

14 The rams of the flock are clothed, and the vales shall abound with corn: they shall shout, yea they shall sing a hymn.

(luke 8:8 And other some fell upon good ground; and being sprung up, yielded fruit a hundredfold.)

18 For I reckon that the sufferings of this time are not worthy to be compared with the glory to come, that shall be revealed in us.

20 For the creature was made subject to vanity, not willingly, but by reason of him that made it subject, in hope:

21 Because the creature also itself shall be delivered from the servitude of corruption, into the liberty of the glory of the children of God.

22 For we know that every creature groaneth and travaileth in pain, even till now.

23 And not only it, but ourselves also, who have the firstfruits of the Spirit, even we ourselves groan within ourselves, waiting for the adoption of the sons of God, the redemption of our body.

1 The same day Jesus going out of the house, sat by the sea side.

2 And great multitudes were gathered unto him, so that he went up into a boat and sat: and all the multitude stood on the shore.

3 And he spoke to them many things in parables, saying: Behold the sower went forth to sow.

4 And whilst he soweth some fell by the way side, and the birds of the air came and ate them up.

5 And other some fell upon stony ground, where they had not much earth: and they sprung up immediately, because they had no deepness of earth.

6 And when the sun was up they were scorched: and because they had not root, they withered away.

7 And others fell among thorns: and the thorns grew up and choked them.

8 And others fell upon good ground: and they brought forth fruit, some an hundredfold, some sixtyfold, and some thirtyfold.

9 He that hath ears to hear, let him hear.

10 And his disciples came and said to him: Why speakest thou to them in parables?

11 Who answered and said to them: Because to you it is given to know the mysteries of the kingdom of heaven: but to them it is not given.

13 Therefore do I speak to them in parables: because seeing they see not, and hearing they hear not, neither do they understand.

18 Hear you therefore the parable of the sower.

19 When any one heareth the word of the kingdom, and understandeth it not, there cometh the wicked one, and catcheth away that which was sown in his heart: this is he that received the seed by the way side.

20 And he that received the seed upon stony ground, is he that heareth the word, and immediately receiveth it with joy.

21 Yet hath he not root in himself, but is only for a time: and when there ariseth tribulation and persecution because of the word, he is presently scandalized.

22 And he that received the seed among thorns, is he that heareth the word, and the care of this world and the deceitfulness of riches choketh up the word, and he becometh fruitless.

23 But he that received the seed upon good ground, is he that heareth the word, and understandeth, and beareth fruit, and yieldeth the one an hundredfold, and another sixty, and another thirty.

The readings on this page are taken from the Douay-Rheims Catholic Bible. You can also read the Mass Readings taken from the New Jerusalem Bible, which is used at Mass in most of the English-speaking world. (References, Copyrights).
◄ July – 11 July – 13 ►
By Pradeep Augustine
Print
Facebook
WhatsApp
Twitter
Pinterest
Linkedin
Email
Telegram
LINE
Viber