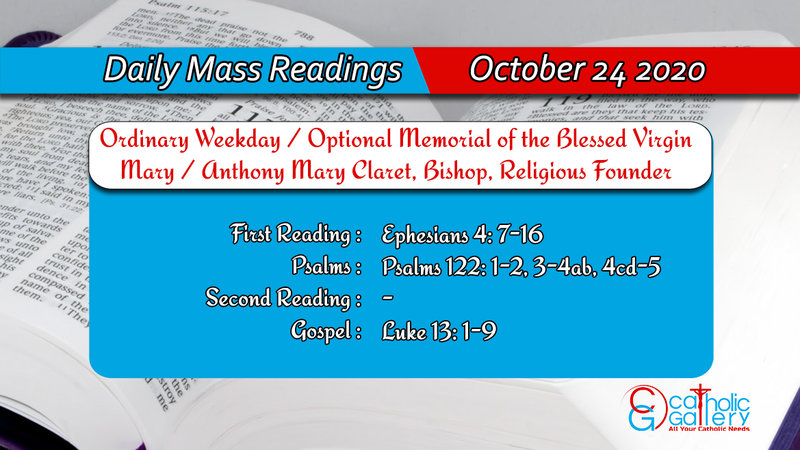 7 But to every one of us is given grace, according to the measure of the giving of Christ.

8 Wherefore he saith: Ascending on high, he led captivity captive; he gave gifts to men.

9 Now that he ascended, what is it, but because he also descended first into the lower parts of the earth?

10 He that descended is the same also that ascended above all the heavens, that he might fill all things.

12 For the perfecting of the saints, for the work of the ministry, for the edifying of the body of Christ:

13 Until we all meet into the unity of faith, and of the knowledge of the Son of God, unto a perfect man, unto the measure of the age of the fulness of Christ;

14 That henceforth we be no more children tossed to and fro, and carried about with every wind of doctrine by the wickedness of men, by cunning craftiness, by which they lie in wait to deceive.

15 But doing the truth in charity, we may in all things grow up in him who is the head, even Christ:

16 From whom the whole body, being compacted and fitly joined together, by what every joint supplieth, according to the operation in the measure of every part, maketh increase of the body, unto the edifying of itself in charity.

1 I rejoiced at the things that were said to me: We shall go into the house of the Lord.

2 Our feet were standing in thy courts, O Jerusalem.

3 Jerusalem, which is built as a city, which is compact together.

5 Because their seats have sat in judgment, seats upon the house of David.

1 And there were present, at that very time, some that told him of the Galileans, whose blood Pilate had mingled with their sacrifices.

2 And he answering, said to them: Think you that these Galileans were sinners above all the men of Galilee, because they suffered such things?

3 No, I say to you: but unless you shall do penance, you shall all likewise perish.

4 Or those eighteen upon whom the tower fell in Siloe, and slew them: think you, that they also were debtors above all the men that dwelt in Jerusalem?

5 No, I say to you; but except you do penance, you shall all likewise perish.

6 He spoke also this parable: A certain man had a fig tree planted in his vineyard, and he came seeking fruit on it, and found none.

7 And he said to the dresser of the vineyard: Behold, for these three years I come seeking fruit on this fig tree, and I find none. Cut it done therefore: why cumbereth it the ground?

8 But he answering, said to him: Lord, let it alone this year also, until I dig about it, and dung it.

9 And if happily it bear fruit: but if not, then after that thou shalt cut it down.

The readings on this page are taken from the Douay-Rheims Catholic Bible. You can also read the Mass Readings taken from the New Jerusalem Bible, which is used at Mass in most of the English-speaking world. (References, Copyrights).
◄ October – 23October – 25 ►
ByPradeep Augustine
Print
Facebook
WhatsApp
Twitter
Pinterest
Linkedin
Email
Telegram
LINE
Viber