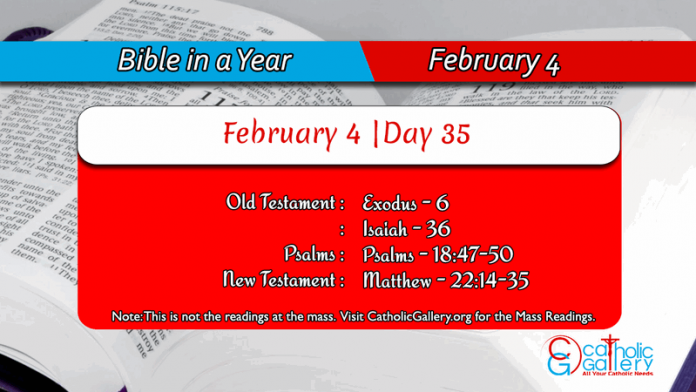 1 And the Lord said to Moses: “Now you will see what I shall do to Pharaoh. For through a strong hand he will release them, and by a mighty hand he will cast them from his land.”

2 And the Lord spoke to Moses, saying: “I am the Lord,

3 who appeared to Abraham, to Isaac, and to Jacob as Almighty God. And I did not reveal to them my name: ADONAI.

4 And I formed a covenant with them, in order to give them the land of Canaan, the land of their sojourning, in which they were newcomers.

5 I have heard the groaning of the sons of Israel, with which the Egyptians have oppressed them. And I have remembered my covenant.

6 For this reason, say to the sons of Israel: I am the Lord who will lead you away from the work house of the Egyptians, and rescue you from servitude, and also redeem you with an exalted arm and great judgments.

7 And I will take you to myself as my people, and I will be your God. And you will know that I am the Lord your God, who led you away from the work house of the Egyptians,

8 and who brought you into the land, over which I lifted up my hand in order to grant it to Abraham, Isaac, and Jacob. And I will grant it to you as a possession. I am the Lord.”

9 And so, Moses explained all these things to the sons of Israel, who did not agree with him, because of their anguish of spirit and very difficult work.

10 And the Lord spoke to Moses, saying:

11 Enter and speak to Pharaoh, king of Egypt, so that he may release the sons of Israel from his land.

12 Moses responded in the sight the Lord: “Behold, the sons of Israel do not listen to me. And how will Pharaoh listen to me, especially since I am of uncircumcised lips?”

14 These are the leaders of the houses by their families. The sons of Reuben, the firstborn of Israel: Hanoch and Pallu, Hezron and Carmi.

15 These are the kindred of Reuben. The sons of Simeon: Jemuel and Jamin, and Ohad, and Jachin, and Zohar, and Shaul, the son of a Canaanite women. These are the progeny of Simeon.

16 And these are the names of the sons of Levi by their kindred: Gershon, and Kohath, and Merari. Now the years of the life of Levi were one hundred and thirty-seven.

17 The sons of Gershon: Libni and Shimei, by their kindred.

18 The sons of Kohath: Amram, and Izhar, and Hebron and Uzziel. Likewise, the years of the life of Kohath were one hundred and thirty-three.

19 The sons of Merari: Mahli and Mushi. These are the kindred of Levi by their families.

20 Now Amram took as a wife Jochebed, his paternal aunt, who bore for him Aaron and Moses. And the years of the life of Amram were one hundred and thirty-seven.

21 Likewise, the sons of Izhar: Korah, and Nepheg, and Zichri.

22 Likewise, the sons of Uzziel: Mishael, and Elzaphan, and Sithri.

23 Now Aaron took as a wife Elizabeth, the daughter of Amminadab, sister of Nahshon, who bore for him Nadab, and Abihu, and Eleazar, and Ithamar.

24 Likewise, the sons of Korah: Assir, and Elkanah, and Abiasaph. These are the kindred of the Korahites.

25 And truly Eleazar, the son of Aaron, took a wife from the daughters of Putiel. And she bore him Phinehas. These are the heads of the Levitical families by their kindred.

26 These are Aaron and Moses, whom the Lord instructed to lead the sons of Israel away from the land of Egypt by their companies.

27 These are those who speak to Pharaoh, king of Egypt, in order to lead the sons of Israel out of Egypt. These are Moses and Aaron,

28 in the day when the Lord spoke to Moses in the land of Egypt.

29 And the Lord spoke to Moses, saying: “I am the Lord. Speak to Pharaoh, king of Egypt, all that I speak to you.”

30 And Moses said in the sight of the Lord: “Lo, I am of uncircumcised lips, how will Pharaoh listen to me?”

1 And it happened that, in the fourteenth year of king Hezekiah, Sennacherib, the king of the Assyrians, went up against all the fortified cities of Judah, and he seized them.

2 And the king of the Assyrians sent Rabshakeh from Lachish into Jerusalem, to king Hezekiah, with a great force, and he stood near the aqueduct of the upper pool, at the road to the fuller’s field.

3 And those who went to him were Eliakim, son of Hilkiah, who was over the house, and Shebna, the scribe, and Joah, son of Asaph, the historian.

4 And Rabshakeh said to them: “Tell Hezekiah: Thus says the great king, the king of the Assyrians: What is this faith in which you believe?

5 And by what counsel or strength would you prepare to rebel? In whom do you have faith, so much so that you would withdraw from me?

6 Behold, you are trusting in Egypt, in that broken staff of a reed. But if a man were to lean against it, it would enter his hand and pierce it. So is Pharaoh, the king of Egypt, to all who trust in him.

7 But if you answer me by saying: ‘We trust in the Lord our God.’ Is it not his high places and altars that Hezekiah has taken away? And he has said to Judah and to Jerusalem, ‘You shall worship before this altar.’

8 And now, hand yourselves over to my lord, the king of the Assyrians, and I will give you two thousand horses, and you will not be able to find riders for them on your own.

9 So how will you withstand the face of the ruler of even one place, of even the least of my lord’s subordinates? But if you trust in Egypt, in four-horse chariots and in horsemen:

11 And Eliakim, and Shebna, and Joah said to Rabshakeh: “Speak to your servants in the Syrian language. For we understand it. Do not speak to us in the Jewish language, in the hearing of the people, who are upon the wall.”

12 And Rabshakeh said to them: “Has my lord sent me to your lord and to you in order to speak all these words, and not even more so to the men who are sitting on the wall, so that they may eat their own dung and drink their own urine with you?”

13 Then Rabshakeh stood up, and he cried out with a loud voice in the Jewish language, and he said: “Listen to the words of the great king, the king of the Assyrians.

14 Thus says the king: Do not let Hezekiah deceive you. For he will not be able to rescue you.

15 And do not let Hezekiah cause you to trust in the Lord, saying: ‘The Lord will rescue and free us. This city will not be given into the hands of the king of the Assyrians.’

17 until I arrive and take you away to a land which is like your own: a land of grain and of wine, a land of bread and of vineyards.

18 But you should not let Hezekiah disturb you, saying, ‘The Lord will deliver us.’ Have any of the gods of each of the nations delivered their land from the hand of the king of the Assyrians?

20 Who is there, among all the gods of these lands, who has rescued his land from my hand, so that the Lord would rescue Jerusalem from my hand?”

21 And they remained silent and did not answer a word to him. For the king had commanded them, saying, “You shall not respond to him.”

22 And Eliakim, son of Hilkiah, who was over the house, and Shebna, the scribe, and Joah, son of Asaph, the historian, entered to Hezekiah with their garments rent, and they reported to him the words of Rabshakeh.

47 The Lord liveth, and blessed be my God, and let the God of my salvation be exalted:

48 O God, who avengest me, and subduest the people under me, my deliverer from my enemies.

49 And thou wilt lift me up above them that rise up against me: from the unjust man thou wilt deliver me.

50 Therefore will I give glory to thee, O Lord, among the nations, and I will sing a psalm to thy name.

51 Giving great deliverance to his king, and shewing mercy to David his anointed: and to his seed for ever.

15 Then the Pharisees, going out, took counsel as to how they might entrap him in speech.

16 And they sent their disciples to him, with the Herodians, saying: “Teacher, we know that you are truthful, and that you teach the way of God in truth, and that the influence of others is nothing to you. For you do not consider the reputation of men.

17 Therefore, tell us, how does it seem to you? Is it lawful to pay the census tax to Caesar, or not?”

18 But Jesus, knowing their wickedness, said: “Why do you test me, you hypocrites?

19 Show me the coin of the census tax.” And they offered him a denarius.

20 And Jesus said to them, “Whose image is this, and whose inscription?”

21 They said to him, “Caesar’s.” Then he said to them, “Then render to Caesar what is of Caesar; and to God what is of God.”

22 And hearing this, they wondered. And having left him behind, they went away.

23 In that day, the Sadducees, who say there is to be no resurrection, approached him. And they questioned him,

24 saying: “Teacher, Moses said: If anyone will have died, having no son, his brother shall marry his wife, and he shall raise up offspring to his brother.

25 Now there were seven brothers with us. And the first, having taken a wife, died. And having no offspring, he left his wife to his brother:

26 similarly with the second, and the third, even to the seventh.

27 And last of all, the woman also passed away.

28 In the resurrection, then, whose wife of the seven will she be? For they all had her.”

29 But Jesus responded to them by saying: “You have gone astray by knowing neither the Scriptures, nor the power of God.

30 For in the resurrection, they shall neither marry, nor be given in marriage. Instead, they shall be like the Angels of God in heaven.

31 But concerning the resurrection of the dead, have you not read what was spoken by God, saying to you:

33 And when the crowds heard this, they wondered at his doctrine.

34 But the Pharisees, hearing that he had caused the Sadducees to be silent, came together as one.

35 And one of them, a doctor of the law, questioned him, to test him: