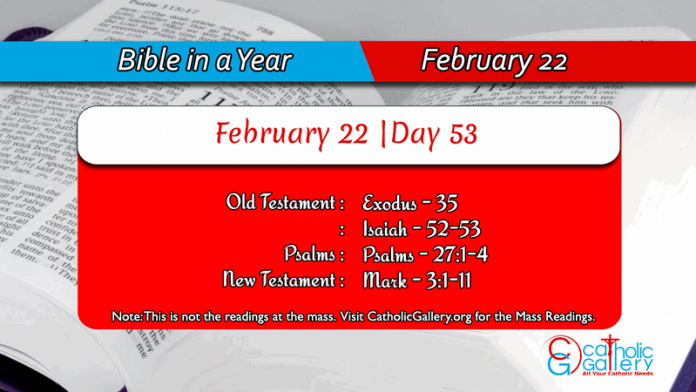 1 Therefore, when all the multitude of the sons of Israel had gathered together, he said to them: “These are the things that the Lord has ordered to be done:

2 For six days you shall do work; the seventh day, the Sabbath and the rest of the Lord, will be holy to you; whoever will have done any work in it shall be killed.

3 You shall not kindle a fire in any of your dwelling places throughout the day of the Sabbath.”

4 And Moses said to the entire crowd of the sons of Israel: “This is the word which the Lord has instructed, saying:

5 Separate from among you the first-fruits to the Lord. Let all who are willing and have a ready soul offer these to the Lord: gold, and silver, and brass,

6 hyacinth, and purple, and twice-dyed scarlet, and fine linen, the hair of goats,

7 and the skins of rams, dyed red, and violet skins, setim wood,

8 and oil to prepare lights and to produce ointment, and most sweet incense,

9 onyx stones and gems, to adorn the ephod and the breastplate.

10 And whoever among you is wise, let him come and make what the Lord has commanded:

11 the tabernacle, certainly, and its roof, and also the covering, the rings, and the panels with the bars, the tent pegs and the bases,

12 the ark and its bars, the propitiatory, and the veil that is drawn before it,

13 the table with its bars and vessels, and the bread of the presence,

14 the lampstand to hold up the lights, its vessels and lamps, and the oil to the nourish the fire,

15 the altar of incense and its bars, and the oil of unction, and the incense of aromatics, the tent at the door of the tabernacle,

16 the altar of holocaust and its grate of brass, with the bars and vessels, the washtub and its base,

17 the curtains of the atrium, with the columns and the bases, the hanging at the doors of the vestibule,

18 the tent pegs of the tabernacle and the atrium, with their little cords,

19 the vestments, which are to be used in the ministry of the Sanctuary, the vestments of Aaron, the high priest, as well as those of his sons, in order to exercise the priesthood to me.”

20 And all the multitude of the sons of Israel, departing from the sight of Moses,

21 offered the first-fruits to the Lord with a most ready and devout mind, to accomplish the work of the tabernacle of the testimony. Whatever was needed for worship and for the holy vestments,

22 men along with women provided: arm bands and earrings, rings and bracelets. And every vessel of gold was separated, to be donated to the Lord.

23 If anyone had hyacinth, and purple, and twice-dyed scarlet, fine linen and the hair of goats, the skins of rams, dyed red, and violet skins,

24 metal of silver and brass, they offered it to the Lord, along with setim wood for various uses.

25 But the skillful women also gave whatever they had spun: hyacinth, purple, and vermillion, as well as fine linen,

26 and the hair of goats, donating everything of their own accord.

27 Yet truly, the leaders offered onyx stones and gems, for the ephod and the breastplate,

28 and aromatics and oil, to maintain the lights, and to prepare ointment, and also to produce incense with a most sweet odor.

29 All the men and women offered donations with a devout mind, so that the works might be done which the Lord had ordered by the hand of Moses. All the sons of Israel dedicated voluntary offerings to the Lord.

30 And Moses said to the sons of Israel: “Behold, the Lord has called by name Bezalel, the son of Uri, the son of Hur, from the tribe of Judah,

31 and he has filled him with the Spirit of God, with wisdom, and understanding, and knowledge, and all teaching,

32 to design and to fashion, with gold and silver and brass,

33 and with engraving stones, and with the skill of a carpenter. Whatever can be skillfully invented,

34 he has given to his heart. It is likewise with Oholiab, the son of Ahisamach from the tribe of Dan.

35 He has taught both of them wisdom, in order to do the work of carpentry, tapestry, and embroidery, from hyacinth, and purple, and twice-dyed scarlet, and fine linen, and every textile, and to discover whatever may be new.”

1 Rise up, Rise up! Clothe yourself in strength, O Zion! Put on the garments of your glory, O Jerusalem, the city of the Holy One! For the uncircumcised and the unclean will no longer pass through you.

2 Shake yourself from the dust! Arise and sit up, O Jerusalem! Loose the chains from your neck, O captive daughter of Zion!

3 For thus says the Lord: You were sold for nothing, and you will be redeemed without money.

4 For thus says the Lord God: My people descended into Egypt, in the beginning, in order to sojourn there. But the Assyrian oppressed them, without any cause at all.

5 And now, what is left for me here, says the Lord? For my people have been taken away without cause. Their lords treat them unjustly, says the Lord. And my name is being continually blasphemed all day long.

6 Because of this, my people will know my name, in that day. For it is I myself who is speaking. Behold, I am here.

7 How beautiful upon the mountains are the feet of the messenger and the preacher of peace! Announcing good and preaching peace, they are saying to Zion, “Your God will reign!”

8 It is the voice of your watchmen. They have lifted up their voice. They will praise together. For they will see eye to eye, when the Lord converts Zion.

9 Be glad and rejoice together, O deserts of Jerusalem! For the Lord has consoled his people. He has redeemed Jerusalem.

10 The Lord has prepared his holy arm, in the sight of all the Gentiles. And all the ends of the earth will see the salvation of our God.

11 Depart, depart, get out of here! Do not be willing to touch what is polluted. Go out from her midst! Be cleansed, you who bear the vessels of the Lord.

12 For you will not go out in a tumult, nor will you take flight in a hurry. For the Lord will precede you, and the God of Israel will gather you.

13 Behold, my servant will understand; he will be exalted and lifted up, and he will be very sublime.

14 Just as they were stupefied over you, so will his countenance be without glory among men, and his appearance, among the sons of men.

15 He will sprinkle many nations; kings will close their mouth because of him. And those to whom he was not described, have seen. And those who have not heard, have considered.

1 Who has believed our report? And to whom has the arm of the Lord been revealed?

2 And he will rise up like a tender plant in his sight, and like a root from the thirsty ground. There is no beautiful or stately appearance in him. For we looked upon him, and there was no aspect, such that we would desire him.

3 He is despised and the least among men, a man of sorrows who knows infirmity. And his countenance was hidden and despised. Because of this, we did not esteem him.

4 Truly, he has taken away our weaknesses, and he himself has carried our sorrows. And we thought of him as if he were a leper, or as if he had been struck by God and humiliated.

6 We have all gone astray like sheep; each one has turned aside to his own way. And the Lord has placed all our iniquity upon him.

8 He was lifted up from anguish and judgment. Who will describe his life? For he has been cut off from the land of the living. Because of the wickedness of my people, I have struck him down.

9 And he will be given a place with the impious for his burial, and with the rich for his death, though he has done no iniquity, nor was deceit in his mouth.

11 Because his soul has labored, he will see and be satisfied. By his knowledge, my just servant will himself justify many, and he himself will carry their iniquities.

12 Therefore, I will allot to him a great number. And he will divide the spoils of the strong. For he has handed over his life to death, and he was reputed among criminals. And he has taken away the sins of many, and he has prayed for the transgressors.

2 Whilst the wicked draw near against me, to eat my flesh. My enemies that trouble me, have themselves been weakened, and have fallen.

3 If armies in camp should stand together against me, my heart shall not fear. If a battle should rise up against me, in this will I be confident.

4 One thing I have asked of the Lord, this will I seek after; that I may dwell in the house of the Lord all the days of my life. That I may see the delight of the Lord, and may visit his temple.

1 And again, he entered into the synagogue. And there was a man there who had a withered hand.

2 And they observed him, to see if he would cure on the Sabbaths, so that they might accuse him.

3 And he said to the man who had the withered hand, “Stand up in the middle.”

4 And he said to them: “Is it lawful to do good on the Sabbaths, or to do evil, to give health to a life, or to destroy?” But they remained silent.

5 And looking around at them with anger, being very saddened over the blindness of their hearts, he said to the man, “Extend your hand.” And he extended it, and his hand was restored to him.

6 Then the Pharisees, going out, immediately took counsel with the Herodians against him, as to how they might destroy him.

7 But Jesus withdrew with his disciples to the sea. And a great crowd followed him from Galilee and Judea,

8 and from Jerusalem, and from Idumea and across the Jordan. And those around Tyre and Sidon, upon hearing what he was doing, came to him in a great multitude.

9 And he told his disciples that a small boat would be useful to him, because of the crowd, lest they press upon him.

10 For he healed so many, that as many of them as had wounds would rush toward him in order to touch him.

11 And the unclean spirits, when they saw him, fell prostrate before him. And they cried out, saying,