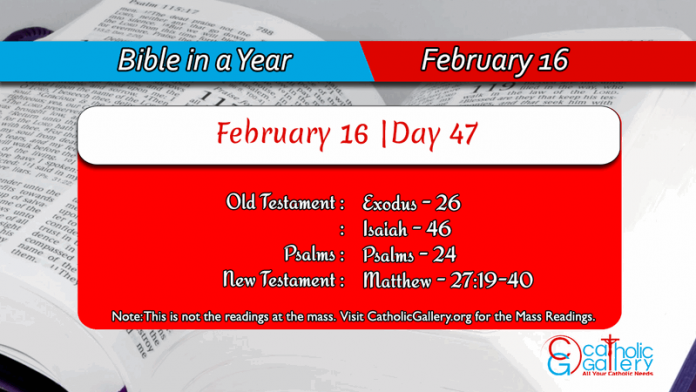 1 Truly, thus shall you make the tabernacle: You shall make ten curtains of fine twisted linen, and hyacinth as well as purple, and twice-dyed scarlet, with diverse embroidery.

2 The length of one curtain shall have twenty-eight cubits. The width shall be four cubits. The entire set of curtains shall be of one measure.

3 Five curtains shall be joined to one another, and the other five shall be similarly coupled together.

4 You shall make loops of hyacinth on the sides at the edges of the curtains, so that they will be able to be joined to one another.

5 A curtain shall have fifty loops on each of two sides, inserted in such a manner that loop may come against loop, and one can be fitted to the other.

6 You shall also make fifty rings of gold, with which the veils of the curtains are to be joined, so that it shall be one tabernacle.

7 You shall also make eleven haircloth canopies to cover the roof of the tabernacle.

8 The length of one canopy shall hold thirty cubits, and the width, four. The measure of all the canopies shall be equal.

11 You shall also make fifty brass buckles, with which the loops may be joined, so that there may be one covering out of all.

12 Then what will be left over of the canopies which are prepared for the roof, that is, one canopy which is in excess, from half of it you shall cover the back of the tabernacle.

13 And one cubit will hang down on one side, and another on the other side, which is more than the length of the curtains, protecting both sides of the tabernacle.

15 You shall also make the standing panels of the tabernacle from setim wood.

16 Of these, each shall have ten cubits in length, and in width, one and one half.

17 At the sides of the panels, there shall be made two dovetails, by which one panel may be connected to another panel; and in this way all the panels shall be prepared.

18 Of these, twenty shall be at the meridian, which lies toward the south.

19 For these, you shall cast forty bases of silver, so that two bases will lie under each panel at its two corners.

20 Likewise, at the second side of the tabernacle, which lies to the north, there shall be twenty panels,

21 having forty bases of silver; two bases shall support each panel.

22 Truly, toward the western part of the tabernacle, you shall make six panels,

23 and again another two, which will be raised at the corners, behind the back of the tabernacle.

24 And these shall be joined together from bottom to top, and one joint shall retain them all. Likewise, two of the panels, which will be set at the corners, shall be served by similar joints.

25 And together these will be eight panels, and their bases of silver, sixteen, counting two bases for each panel.

26 You shall also make five bars of setim wood, to connect the panels on one side of the tabernacle,

27 and five others on the other side, and the same number toward the western part.

28 These shall be set along the middle of the panels, from one end all the way to the other end.

29 Likewise, the panels themselves you shall overlay with gold, and you shall establish rings of gold in them, by which the bars of the panels may be connected. These you shall cover with layers of gold.

30 And you shall raise the tabernacle according to the example which was shown to you on the mountain.

31 You shall also make a veil of hyacinth, and purple, and twice-dyed scarlet, and fine twisted linen, wrought with a diversity of continuous and beautiful embroidery.

32 And you shall suspend it before four columns of setim wood, which themselves certainly shall be overlaid with gold, and have heads of gold, but bases of silver.

33 Then the veil shall be inserted through the rings. Beyond the veil, you shall place the ark of the testimony, where both the Sanctuary and the Sanctuary of Sanctuaries shall be divided.

34 And you shall place the propitiatory over the ark of the testimony, in the Holy of Holies.

36 You shall also make a tent at the entrance of the tabernacle from hyacinth, and purple, and twice-dyed scarlet, and fine twisted linen, wrought with embroidery.

37 And you shall overlay with gold five columns of setim wood, over which the tent shall be drawn. The heads of these shall be of gold, and the bases of brass.”

1 Bel has been broken. Nebo has been crushed. Their idols have been placed upon beasts and cattle, your grievous heavy burdens, even unto exhaustion.

2 They have been melted down, or have been smashed together. They were not able to save the one who carried them, and their life will go into captivity.

3 Listen to me, house of Jacob, all the remnant of the house of Israel, who are carried in my bosom, who were born from my womb.

5 To whom would you likened me, or equate me, or compare me, or consider me to be similar?

6 You take gold from a bag, and you weigh silver on a scale, so as to hire a goldsmith to make a god. And they fall prostrate and adore.

7 They carry him on their shoulders, supporting him, and they set him in his place. And he will stand still and will not move from his place. But even when they will cry out to him, he will not hear. He will not save them from tribulation.

8 Remember this, and be confounded. Return, you transgressors, to the heart.

9 Remember the past ages. For I am God, and there is no other god. There is no one like me.

10 From the beginning, I announce the last things, and from the start, the things that have not yet been done, saying: My plan will stand firm, and my entire will shall be done.

11 I call a bird from the east, and from a far away land, the man of my will. And I have spoken it, and I will carry it out. I have created, and I will act.

12 Hear me, you who are hard of heart, who are far from justice!

13 I have brought my justice near. It will not be far away, and my salvation will not be delayed. I will grant salvation in Zion, and my glory in Israel.

7 Lift up your gates, O ye princes, and be ye lifted up, O eternal gates: and the King of Glory shall enter in.

8 Who is this King of Glory? the Lord who is strong and mighty: the Lord mighty in battle.

9 Lift up your gates, O ye princes, and be ye lifted up, O eternal gates: and the King of Glory shall enter in.

19 But as he was sitting in the place for the tribunal, his wife sent to him, saying: “It is nothing to you, and he is just. For I have experienced many things today through a vision for his sake.”

20 But the leaders of the priests and the elders persuaded the people, so that they would ask for Barabbas, and so that Jesus would perish.

21 Then, in response, the procurator said to them, “Which of the two do you want to be released to you?” But they said to him, “Barabbas.”

22 Pilate said to them, “Then what shall I do about Jesus, who is called Christ?” They all said, “Let him be crucified.”

23 The procurator said to them, “But what evil has he done?” But they cried out all the more, saying, “Let him be crucified.”

24 Then Pilate, seeing that he was able to accomplish nothing, but that a greater tumult was occurring, taking water, washed his hands in the sight of the people, saying: “I am innocent of the blood of this just man. See to it yourselves.”

25 And the entire people responded by saying, “May his blood be upon us and upon our children.”

26 Then he released Barabbas to them. But Jesus, having been scourged, he handed over to them, so that he would be crucified.

27 Then the soldiers of the procurator, taking Jesus up to the praetorium, gathered the entire cohort around him.

28 And stripping him, they put a scarlet cloak around him.

29 And plaiting a crown of thorns, they placed it on his head, with a reed in his right hand. And genuflecting before him, they mocked him, saying, “Hail, King of the Jews.”

30 And spitting on him, they took the reed and struck his head.

31 And after they had mocked him, they stripped him of the cloak, and clothed him with his own garments, and they led him away to crucify him.

32 But as they were going out, they came upon a man of Cyrene, named Simon, whom they compelled to take up his cross.

33 And they arrived at the place which is called Golgotha, which is the place of Calvary.

34 And they gave him wine to drink, mixed with gall. And when he had tasted it, he refused to drink it.

35 Then, after they had crucified him, they divided his garments, casting lots, in order to fulfill what was spoken by the prophet, saying: “They divided my garments among them, and over my vestment they cast lots.”

36 And sitting down, they observed him.

37 And they set his accusation above his head, written as: THIS IS JESUS, KING OF THE JEWS.

38 Then two robbers were crucified with him: one on the right and one on the left.

39 But those passing by blasphemed him, shaking their heads,

40 and saying: “Ah, so you would destroy the temple of God and in three days rebuild it! Save your own self. If you are the Son of God, descend from the cross.”