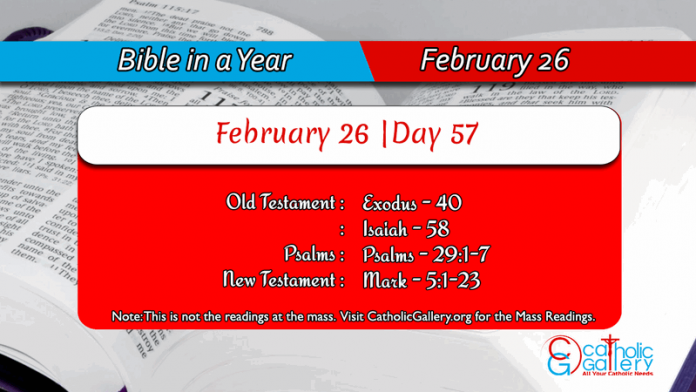 1 And the Lord spoke to Moses, saying:

2 In the first month, on the first day of the month, you shall raise the tabernacle of the testimony,

4 And having brought in the table, you shall place the things which were solemnly commanded upon it. The lampstand shall stand with its lamps,

5 and the altar of gold, in which the incense is burned, shall stand before the ark of the testimony. You shall place the tent at the entrance of the tabernacle,

6 and before it, the altar of holocaust.

7 The washtub shall stand between the altar and the tabernacle, and you shall fill it with water.

8 And you shall encompass the atrium and its entrance with hangings.

9 And, having taken up the oil of unction, you shall anoint the tabernacle along with its articles, so that they may be sanctified.

10 The altar of holocaust and all its vessels,

11 the washtub with its base, and all things, you shall consecrate with the oil of unction, so that they may be the Holy of holies.

12 And you shall bring forward Aaron and his sons to the entrance of the tabernacle of the testimony, and, having washed them with water,

13 you shall clothe them in the holy vestments, so that they may minister to me, and so that their unction may accomplish an everlasting priesthood.”

14 And Moses did all that the Lord had instructed.

15 Therefore, in the first month of the second year, on the first day of the month, the tabernacle was put in place.

16 And Moses raised it up, and he positioned the panels as well as the bases and the bars, and he set up the columns,

17 and he stretched out the roof over the tabernacle, imposing a cover above it, just as the Lord had decreed.

18 And he placed the testimony in the ark, applying the bars beneath, and the oracle above.

19 And when he had brought the ark into the tabernacle, he drew the veil before it, in order to fulfill the commandment of the Lord.

20 And he placed the table in the tabernacle of the testimony, at the north side, beyond the veil,

21 arranging before it the bread of the presence, just as the Lord had instructed Moses.

22 And he placed the lampstand in the tabernacle of the testimony, away from the table, on the south side,

23 setting the lamps in order, according to the precept of the Lord.

24 He also positioned the altar of gold under the roof of the testimony, opposite the veil,

25 and he heaped upon it the incense of aromatics, just as the Lord had commanded Moses.

26 And he positioned the tent at the entrance of the tabernacle of the testimony,

27 and the altar of holocaust in the vestibule of the testimony, offering the holocaust and the sacrifices upon it, just as the Lord had decreed.

28 Likewise, he stationed the washtub between the tabernacle of the testimony and the altar, filling it with water.

29 And Moses and Aaron, along with his sons, washed their hands and feet,

30 whenever they would enter the covering of the covenant, and when they approached to the altar, just as the Lord had instructed Moses.

31 And he raised up the atrium around the tabernacle and the altar, drawing the hanging at its entrance. After all these things were perfected,

32 the cloud covered the tabernacle of the testimony, and the glory of the Lord filled it.

33 Neither could Moses enter the covering of the covenant: the cloud was covering all things, and the majesty of the Lord was flashing. For the cloud had covered everything.

34 Whenever the cloud departed from the tabernacle, the sons of Israel set out by their companies.

35 But if it remained hanging over it, they remained in the same place.

36 Certainly, the cloud of the Lord lay over the tabernacle by day, and the fire by night, being seen by all the people of Israel throughout all their resting places.

1 Cry out! Cease not! Exalt your voice like a trumpet, and announce to my people their wicked acts, and to the house of Jacob their sins.

2 For they also seek me, from day to day, and they are willing to know my ways, like a nation which has done justice and has not abandoned the judgment of their God. They petition me for judgments of justice. They are willing to draw near to God.

4 Behold, you fast with strife and contention, and you strike with the fist impiously. Do not choose to fast as you have done even to this day. Then your outcry will be heard on high.

5 Is this a fast such as I have chosen: for a man to afflict his soul for a day, to contort his head in a circle, and to spread sackcloth and ashes? Should you call this a fast and a day acceptable to the Lord?

6 Is not this, instead, the kind of fast that I have chosen? Release the constraints of impiety; relieve the burdens that oppress; freely forgive those who are broken; and break apart every burden.

7 Break your bread with the hungry, and lead the destitute and the homeless into your house. When you see someone naked, cover him, and do not despise your own flesh.

8 Then your light will break forth like the morning, and your health will improve quickly, and your justice will go before your face, and the glory of the Lord will gather you up.

9 Then you will call, and the Lord will heed; you will cry out, and he will say, “Here I am,” if you take away the chains from your midst, and cease to point your finger and to speak what is not beneficial.

10 When you pour out your life for the hungry, and you satisfy the afflicted soul, then your light will rise up in darkness, and your darkness will be like the midday.

11 And the Lord will give you rest continually, and he will fill your soul with splendor, and he will free your bones, and you will be like a watered garden and like a fountain of water whose waters will not fail.

12 And places that have been desolate for ages will be built up by you. You will raise a foundation for generation after generation. And you will be called the repairer of hedges, who turns the roadways into quiet places.

13 If you restrain your foot on the Sabbath, from doing your own will on my holy day, and if you call the Sabbath delightful, and the Holy of the Lord glorious, and if you glorify him, while you do not act according to your own ways, and your own will is not found, not even to speak a word,

14 then you will find delight in the Lord, and I will take you up, above the heights of the earth, and I will nourish you with the inheritance of Jacob, your father. For the mouth of the Lord has spoken.

5 The voice of the Lord breaketh the cedars: yea, the Lord shall break the cedars of Libanus.

6 And shall reduce them to pieces, as a calf of Libanus, and as the beloved son of unicorns.

7 The voice of the Lord divideth the flame of fire:

1 And they went across the strait of the sea into the region of the Gerasenes.

2 And as he was departing from the boat, he was immediately met, from among the tombs, by a man with an unclean spirit,

3 who had his dwelling place with the tombs; neither had anyone been able to bind him, even with chains.

4 For having been bound often with shackles and chains, he had broken the chains and smashed the shackles; and no one had been able to tame him.

5 And he was always, day and night, among the tombs, or in the mountains, crying out and cutting himself with stones.

6 And seeing Jesus from afar, he ran and adored him.

7 And crying out with a loud voice, he said: “What am I to you, Jesus, the Son of the Most High God? I beseech you by God, that you not torment me.”

8 For he said to him, “Depart from the man, you unclean spirit.”

10 And he entreated him greatly, so that he would not expel him from the region.

11 And in that place, near the mountain, there was a great herd of swine, feeding.

12 And the spirits entreated him, saying: “Send us into the swine, so that we may enter into them.”

13 And Jesus promptly gave them permission. And the unclean spirits, departing, entered into the swine. And the herd of about two thousand rushed down with great force into the sea, and they were drowned in the sea.

14 Then those who pastured them fled, and they reported it in the city and in the countryside. And they all went out to see what was happening.

15 And they came to Jesus. And they saw the man who had been troubled by the demon, sitting, clothed and with a sane mind, and they were afraid.

16 And those who had seen it explained to them how he had dealt with the man who had the demon, and about the swine.

17 And they began to petition him, so that he would withdraw from their borders.

18 And as he was climbing into the boat, the man who had been troubled by the demons began to beg him, so that he might be with him.

19 And he did not permit him, but he said to him, “Go to your own people, in your own house, and announce to them how great are the things that Lord has done for you, and how he has taken pity on you.”

20 And he went away and began to preach in the Ten Cities, how great were the things that Jesus had done for him. And everyone wondered.

21 And when Jesus had crossed in the boat, over the strait again, a great crowd came together before him. And he was near the sea.

22 And one of the rulers of the synagogue, named Jairus, approached. And seeing him, he fell prostrate at his feet.

23 And he beseeched him greatly, saying: “For my daughter is near the end. Come and lay your hand on her, so that she may be healthy and may live.”

◄ February 25 February 27 ►
Bible in a year – Index
January March April
Simplest Bible in a Year plan compiled using the “Catholic Public Domain Version Bible“. This is not the Readings at the Mass. For the Mass Readings, check the Mass Readings taken from the New Jerusalem Bible or the Douay-Rheims Catholic Bible.
By Pradeep Augustine
Print
Facebook
WhatsApp
Twitter
Pinterest