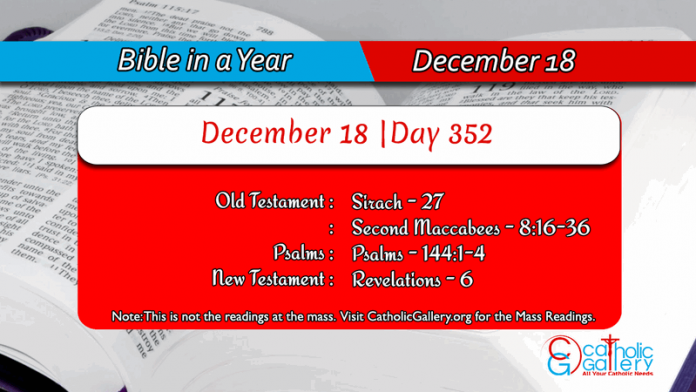 1 Because of need, many have sinned. And whoever seeks to be enriched, averts his eye.

2 Like a post fixed in the middle of adjoining stones, so also will sin become wedged between selling and buying.

3 Sin will be crushed with the one who sins.

4 If you do not hold yourself steadfastly to the fear of the Lord, your house will be quickly overthrown.

5 Just as the dust remains when one shakes a sieve, so will the doubt of a man remain in his thoughts.

6 The furnace tests the potter’s vessels, and the trial of the tribulation tests just men.

7 As the pruning of a tree reveals its fruit, so does a word reveal the thoughts in the heart of a man.

8 You should not praise a man before he speaks; for such is the testing of men.

10 Birds flock to their own kind. And truth will return to those who practice it.

11 The lion lies in wait for its prey continually. So also do sins lie in wait for those who work iniquity.

12 A holy man persists in wisdom like the sun. But a senseless man changes like the moon.

13 In the midst of the senseless, retain a word for the proper time. But be continually in the midst those who are thoughtful.

14 The discussions of sinners are hateful, and their laughter is a delight in sin.

16 The shedding of blood is in the quarrels of the arrogant; and their evil talk is grievous to hear.

17 Whoever discloses the secret of a friend breaks faith; and he will not find a friend for his soul.

18 Love your neighbor, and be united with him faithfully.

19 But if you disclose his secrets, you should not continue to follow after him.

21 And like someone releasing a bird from his hand, so have you abandoned your neighbor, and you will not obtain him again.

22 You should no longer seek him, for he is now far away; he has fled like a roe-deer from a snare. For his soul has been wounded.

23 You will no longer be able to bind his wound. For there may be a reconciliation from cursing.

24 But to disclose the secrets of a friend is the hopeless act of an unhappy soul.

25 One who winks with the eye fabricates iniquity, and no one will cast him aside.

27 I have hated many things, but I have not done as he has done, and the Lord will hate him.

28 Whoever throws a stone straight up will find that it falls on his own head. And a deceitful wound will return to wound the deceitful.

30 Whoever sets in motion a wicked plan will find that it rolls back over him, and he will not know from which direction it will arrive.

31 Mockery and derision are of the arrogant, and vengeance will lie in wait for them, like a lion.

32 Whoever enjoys the fall of the just will perish in a snare, and grief will consume them before they die.

33 Anger and fury are both abominable, and the sinful man will be held by them.

16 But Maccabeus, calling together seven thousand who were with him, asked them not to be reconciled to the enemies, and not to fear the multitude of the enemies who came against them unjustly, but to struggle with fortitude,

17 holding before their eyes the contempt that had been brought upon the holy place by them, and likewise also the mockery which they held to the injury of the city, even to the extent of overthrowing the institutions of old.

18 For he said that these, indeed, trust in their weapons, as well as in their boldness; but we trust in the Almighty Lord, who is able to wipe out both those coming against us, and even the whole world, with one nod.

19 Moreover, he reminded them also of the assistance of God which their parents had received; and how, under Sennacherib, one hundred and eighty-five thousand had perished;

20 and of the battle by them, which was against the Galatians in Babylonia, how, when the event had arrived and the allies of the Macedonians hesitated, though they were only six thousand in all, yet they slew one hundred and twenty thousand, because of the help provided to them from heaven; and how, for the sake of these things, very many benefits followed.

21 By these words, they were brought to constancy and were prepared to die for the laws and their nation.

22 And so, he appointed his brothers as leaders over each division: Simon, and Joseph, and Jonathan, subjecting one thousand and five hundred men to each of them.

23 And at that point, the holy book having been read to them by Esdras, and having given them a sign of the assistance of God, with himself leading the first point, he joined battle with Nicanor.

24 And, with the Almighty as their helper, they slew over nine thousand men. Furthermore, having wounded and disabled the greater part of the army of Nicanor, they forced them to take flight.

25 In fact, they took away the money from those who came to buy them, and they pursued them everywhere.

26 But they turned back at the close of the hour, for it was before the Sabbath. For this reason, they did not continue the pursuit.

27 But, having gathered together their weapons and spoils, they kept the Sabbath, blessing the Lord who had delivered them in that day, showering the beginning of mercy on them.

28 In truth, after the Sabbath, they divided the spoils to the disabled, and the orphans, and the widows, and the remainder they kept for themselves and their own.

29 And so, when these things were done, and supplication was made by all in common, they asked the merciful Lord to be reconciled to his servants unto the end.

30 And, among those who were fighting against them with Timothy and Bacchides, they slew more than twenty thousand, and they obtained the high fortresses, and they divided many spoils, making equal portions for the disabled, the fatherless, and the widows, and even the aged.

31 And when they had carefully collected their weapons, they stored them all in strategic places, and, in truth, the remainder of the spoils they carried to Jerusalem.

32 And they put to death Philarches, a wicked man, who was with Timothy, who had brought many afflictions upon the Jews.

33 And when they celebrated the song of victory at Jerusalem, they burned him who had set fire to the sacred doors, that is, Callisthenes, when he had taken refuge in a certain house, repaying him a worthy reward for his impieties.

34 But as for that most vicious Nicanor, who had led in a thousand merchants for the sale of the Jews,

35 he was brought low with the help of the Lord, and by those whom he considered to be worthless. Putting aside the glorious vestments, fleeing by an inland route, he arrived alone at Antioch, having been brought to the greatest unhappiness by the destruction of his army.

36 And he who had promised to pay a tribute to the Romans from the captives of Jerusalem, now professed that the Jews had God as their protector, and, for this reason, they were invulnerable, because they followed the laws established by him.

1 Blessed be the Lord my God, who teacheth my hands to fight, and my fingers to war.

2 My mercy, and my refuge: my support, and my deliverer: My protector, and I have hoped in him: who subdueth my people under me.

1 And I saw that the Lamb had opened one of the seven seals. And I heard one of the four living creatures saying, in a voice like thunder: “Draw near and see.”

2 And I saw, and behold, a white horse. And he who was sitting upon it was holding a bow, and a crown was given to him, and he went forth conquering, so that he might prevail.

3 And when he had opened the second seal, I heard the second living creature saying: “Draw near and see.”

4 And another horse went forth, which was red. And it was granted to him who was sitting upon it that he would take peace from the earth, and that they would kill one another. And a great sword was given to him.

5 And when he had opened the third seal, I heard the third living creature saying: “Draw near and see.” And behold, a black horse. And he who was sitting upon it was holding a balance in his hand.

7 And when he had opened the fourth seal, I heard the voice of the fourth living creature saying: “Draw near and see.”

8 And behold, a pale horse. And he who was sitting upon it, his name was Death, and Hell was following him. And authority was given to him over the four parts of the earth, to destroy by the sword, by famine, and by death, and by the creatures of the earth.

9 And when he had opened the fifth seal, I saw, under the altar, the souls of those who had been slain because of the Word of God and because of the testimony that they held.

10 And they were crying out with a loud voice, saying: “How long, O Holy and True Lord, will you not judge and not vindicate our blood against those who dwell upon the earth?”

11 And white robes were given to each of them. And they were told that they should rest for a brief time, until their fellow servants and their brothers, who were to be slain even as they were slain, would be completed.

12 And when he had opened the sixth seal, I saw, and behold, a great earthquake occurred. And the sun became black, like a haircloth sack, and the entire moon became like blood.

13 And the stars from heaven fell upon the earth, just as when a fig tree, shaken by a great wind, drops its immature figs.

14 And heaven receded, like a scroll being rolled up. And every mountain, and the islands, were moved from their places.

15 And the kings of the earth, and the rulers, and the military leaders, and the wealthy, and the strong, and everyone, servant and free, hid themselves in caves and among the rocks of the mountains.

16 And they said to the mountains and the rocks: “Fall over us and hide us from the face of the One sitting upon the throne, and from the wrath of the Lamb.

17 For the great day of their wrath has arrived. And who will be able to stand?”

◄ December 17 December 19 ►
Bible in a year – Index
November January February
Simplest Bible in a Year plan compiled using the “Catholic Public Domain Version Bible“. This is not the Readings at the Mass. For the Mass Readings, check the Mass Readings taken from the New Jerusalem Bible or the Douay-Rheims Catholic Bible.
By Pradeep Augustine
Print
Facebook
WhatsApp
Twitter
Pinterest