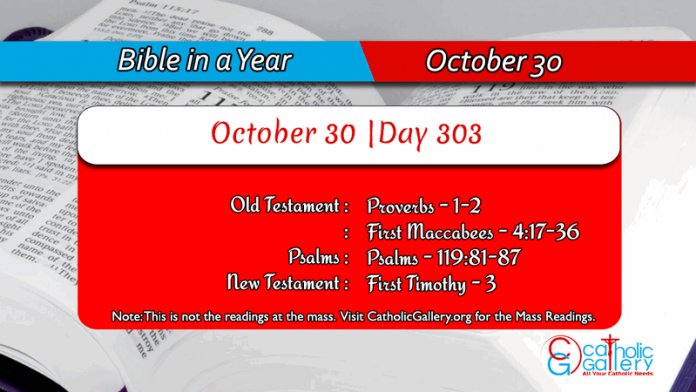 1 The parables of Solomon, son of David, king of Israel,

2 in order to know wisdom and discipline,

3 to understand words of prudence, and to accept the instruction of doctrine, justice and judgment, and equity,

4 so as to give discernment to little ones, knowledge and understanding to adolescents.

5 By listening, the wise shall become wiser and the intelligent shall possess governments.

6 He shall turn his soul to a parable and to its interpretation, to the words of the wise and their enigmas.

7 The fear of the Lord is the beginning of wisdom. The foolish despise wisdom as well as doctrine.

8 Listen, my son, to the discipline of your father, and forsake not the law of your mother,

9 so that grace may be added to your head and a collar to your neck.

10 My son, if sinners should entice you, do not consent to them.

11 If they should say: “Come with us. We will lie in wait for blood. We will lay traps against the innocent, without cause.

13 We will discover every precious substance. We will fill our houses with spoils.

15 My son, do not walk with them. Preclude your feet from their paths.

16 For their feet rush to evil, and they hurry to shed blood.

17 But a net is thrown in vain before the eyes of those who have wings.

19 Thus, the ways of all those who are greedy seize the souls of those who possess.

20 Wisdom forewarns far and wide; she bestows her voice in the streets.

21 She cries out at the head of crowds; at the entrance of the gates of the city, she offers her words, saying:

23 Be converted by my correction. Lo, I will offer my spirit to you, and I will reveal my words to you.

24 For I called, and you refused. I extended my hand, and there was no one who watched.

25 You have despised all my counsels, and you have neglected my rebukes.

26 Similarly, I will ridicule you at your demise, and I will mock you, when that which you feared shall overcome you.

27 When sudden calamity rushes upon you, and your demise advances like a tempest, when tribulation and anguish overcome you,

28 then they will call to me, and I will not heed, they will arise in the morning, and not find me.

29 For they held hatred for discipline, and they would not accept the fear of the Lord;

30 they would not consent to my counsel, but they detracted from all of my corrections.

31 Therefore, they shall eat the fruit of their way, and they shall have their fill of their own counsels.

32 The loathing of the little ones shall destroy them, and the prosperity of the foolish shall perish them.

33 But whoever will listen to me shall rest without terror, and shall have full enjoyment of abundance, without fear of evils.”

1 My son, if you would accept my words, and conceal my commandments within you,

2 so that your ears may listen to wisdom, then bend your heart in order to know prudence.

3 For if you would call upon wisdom and bend your heart to prudence,

4 if you will seek her like money, and dig for her as if for treasure,

5 then you will understand the fear of the Lord, and you will discover the knowledge of God.

6 For the Lord bestows wisdom, and out of his mouth, prudence and knowledge.

7 He will preserve the salvation of the righteous, and he will protect those who walk in simplicity:

8 serving the paths of justice, and guarding the ways of sanctity.

9 Then you shall understand justice and judgment, and equity, and every good path.

10 If wisdom is to enter into your heart, and if knowledge is to become pleasing to your soul,

11 then counsel must guard you, and prudence must serve you,

12 so that you may be rescued from the evil way, and from the man who speaks perversities,

13 from those who leave the straight path to walk in dark ways,

14 who rejoice when they have done evil, and who exult in the most wicked things.

15 Their ways are perverse, and their steps are infamous.

16 So may you be rescued from the foreign woman, and from the outsider, who softens her speech,

17 and who leaves behind the Guide of her youth,

18 and who has forgotten the covenant of her God. For her household inclines toward death, and her paths toward Hell.

19 All those who enter to her will not return again, nor will they take hold of the paths of life.

20 So may you walk in the good way, and keep to the difficult paths of the just.

21 For those who are upright shall live upon the earth, and the simple shall continue upon it.

22 Yet truly, the impious shall perish from the earth, and those who act unjustly shall be taken away from it.

17 And he said to the people: “Do not desire the spoils; for there is war before us.

18 And Gorgias and his army are near us on the mountain. But stand firm now against our enemies, and fight against them, and you shall take the spoils afterwards, securely.”

19 And while Judas was speaking these words, behold, a certain part of them appeared, looking out from the mountain.

20 And Gorgias saw that his men were put to flight, and that they had set fire to the camp. For the smoke that he saw declared what had happened.

21 When they had seen this, they became very afraid, seeing at the same time both Judas and his army in the plains prepared to do battle.

22 So they all fled away into the encampment of the foreigners.

23 And Judas returned to take the spoils of the camp, and they obtained much gold and silver, and hyacinth, and purple of the sea, and great riches.

24 And returning, they sang a canticle, and they blessed God in heaven, because he is good, because his mercy is with every generation.

25 And so, a great salvation occurred in Israel in that day.

26 But those among the foreigners who escaped went and reported to Lysias all that had happened.

27 And when he heard these things, he was discouraged, being alarmed to his very soul. For things had not occurred in Israel according to his wishes, nor as the king had commanded.

28 And, in the following year, Lysias gathered together sixty thousand chosen men and five thousand horsemen, so that he might defeat them in warfare.

29 And they came into Judea, and they positioned their camp in Bethzur, and Judas met them with ten thousand men.

30 And they saw the strength of the army, and so he prayed, and he said: “Blessed are you, Savior of Israel, who crushed the assault of the powerful by the hand of your servant David, and who delivered up the camp of the foreigners into the hand of Jonathan, the son of Saul, and his armor bearer.

31 Enclose this army in the hand of your people Israel, and let them be confounded in their soldiers and their horsemen.

32 Strike them with dread, and melt away the boldness of their strength, and let them shudder in their grief.

33 Cast them down with the sword of those who love you, and let all who know your name praise you with hymns.”

34 And they went forth to battle, and there fell from the army of Lysias five thousand men.

35 But Lysias, seeing their flight and the boldness of the Jews, and that they were prepared either to live or to die with fortitude, went to Antioch and chose soldiers, so that they might come back to Judea with greater numbers.

36 Then Judas and his brothers said: “Behold, our enemies have been crushed. Let us go up now to cleanse and renew the holy places.”

81 CAPH. My soul hath fainted after thy salvation: and in thy word I have very much hoped.

82 My eyes have failed for thy word, saying: When wilt thou comfort me?

83 For I am become like a bottle in the frost: I have not forgotten thy justifications.

84 How many are the days of thy servant: when wilt thou execute judgment on them that persecute me?

85 The wicked have told me fables: but not as thy law.

86 All thy statutes are truth: they have persecuted me unjustly, do thou help me.

87 They had almost made an end of me upon earth: but I have not forsaken thy commandments.

1 It is a faithful saying: if a man desires the episcopate, he desires a good work.

2 Therefore, it is necessary for a bishop to be beyond reproach, the husband of one wife, sober, prudent, gracious, chaste, hospitable, a teacher,

3 not a drunkard, not combative but restrained, not quarrelsome, not covetous;

4 but a man who leads his own house well, having children who are subordinate with all chastity.

5 For if a man does not know how to lead his own house, how will he take care of the Church of God?

6 He must not be a new convert, lest, being elated by pride, he may fall under the sentence of the devil.

7 And it is necessary for him also to have good testimony from those who are outside, so that he may not fall into disrepute and the snare of the devil.

8 Similarly, deacons must be chaste, not double-tongued, not given to much wine, not pursuing tainted profit,

9 holding to the mystery of the faith with a pure conscience.

10 And these things should be proven first, and then they may minister, being without offense.

11 Similarly, the women must be chaste, not slanderers, sober, faithful in all things.

12 Deacons should be the husband of one wife, men who lead their own children and their own houses well.

13 For those who have ministered well will acquire for themselves a good position, and much confidence in the faith which is in Christ Jesus.

14 I am writing these things to you, with the hope that I will come to you soon.

15 But, if I am delayed, you should know the manner in which it is necessary to conduct yourself in the house of God, which is the Church of the living God, the pillar and the foundation of truth.