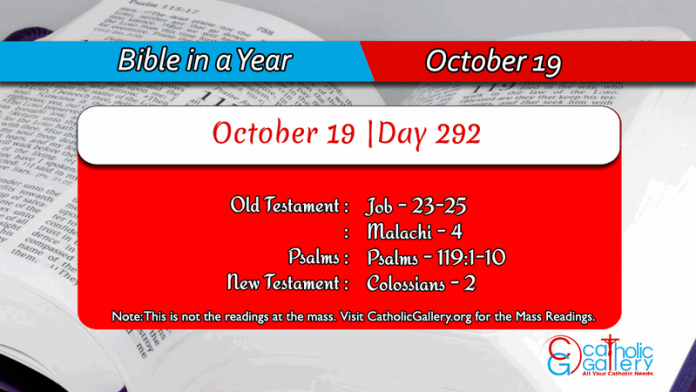 1 Then Job answered by saying:

2 Now again my conversation is in bitterness, and the force of my scourging weighs more heavily on me because of my mourning.

3 Who will grant me that I might know and find him, and that I may approach even to his throne?

4 I would place judgment before his eye, and my mouth would fill with criticism,

5 so that I may know the words that he will answer me and understand what he will say to me.

6 I do not want him to contend with me with much strength, nor to overwhelm me with the bulk of his greatness.

7 Let him show fairness in response to me, and let my judgment reach to victory.

9 If I turn to the left, what can I do? I will not take hold of him. If I turn myself to the right, I will not see him.

10 Truly, he knows my way and has tested me like gold that passes through fire.

11 My feet have been following his footsteps; I have kept to his way and have not strayed from it.

12 I have not withdrawn from the commands of his lips, and the words of his mouth I have hidden in my sinews.

13 For he is alone, and no one is able to disturb his intention; and whatever his spirit wills, that he accomplishes.

14 And when he fulfills his will in me, many other similar ones will also be present with him.

15 And, for this reason, I have been troubled at his presence, and, when I consider him, I am approached by fear.

16 God has weakened my heart, and the Almighty has confused me.

17 Yet I have not perished because of the threatening darkness, nor has gloom covered my face.

1 The times are not hidden from the Almighty; even those who know him, do not know his days.

2 Some have crossed the boundaries, plundered the flocks, and given them pasture.

3 They have driven away the donkey of orphans, and have taken the cow from the widow as collateral.

4 They have undermined the way of the poor, and have pressed together the meek of the earth.

5 Others, like wild asses in the desert, go forth to their work; by watching for prey, they obtain bread for their children.

6 They reap a field that is not their own, and they harvest a vineyard that they have taken by force.

7 They send men away naked, having taken the clothing of those who have no covering in the cold;

8 these are wet with the mountain rain, and, having no covering, they embrace the rocks.

9 They have used violence to deprive orphans, and they have robbed the poor common people.

10 From the naked and those who do not have enough clothing, and from the hungry, they have taken away sheaves of grain.

11 They take their midday rest among the stockpiles of those who, though they have trodden the winepresses, suffer thirst.

12 In the cities, they caused the men to groan and the spirit of the wounded to cry out, and so God does not allow this to go unpunished.

13 They have been rebellious against the light; they have not known his ways, nor have they returned by his paths.

14 The killer of men rises at first light; he executes the destitute and the poor, but, in truth, he is like a thief in the night.

15 The eye of the adulterer waits for darkness, saying, “No eye will see me,” and he covers his face.

16 He passes through houses in the nighttime, just as they had agreed among themselves in the daytime; and they are ignorant of the light.

17 If sunrise should suddenly appear, it is treated by them like the shadow of death; and they walk in darkness, as if in light.

18 He is nimble on the surface of water. His place on land is to be accursed. May he not walk by way of the vineyards.

19 May he cross from the snowy waters to excessive heat, and his sin, all the way to hell.

20 Let mercy forget him. His charm is worms. Let him not be remembered, but instead be broken like an unfruitful tree.

21 For he has fed on the barren, who does not bear fruit, and he has not done good to the widow.

22 He has pulled down the strong by his strength, and, when he stands up, he will not have trust in his life.

23 God has given him a place for repentance, and he abuses it with arrogance, but his eyes are upon his ways.

25 But, if this is not so, who is able to prove to me that I have lied and to place my words before God?

2 Power and terror are with him that makes a pact with those in high places.

4 Is it right for man to compare himself to God, or to appear pure though he is born of woman?

5 Behold, even the moon is not radiant, and the stars are not pure, in his sight.

1 For, behold, the day will arrive, kindled like a furnace, and all the arrogant and all those who act impiously will be stubble. And the approaching day will inflame them, says the Lord of hosts; it will leave behind for them neither root, nor sprout.

2 But unto you, who fear my name, the Sun of justice will arise, and health will be in his wings. And you will go forth and leap like the calves of the herd.

3 And you will trample the impious, while they will be ashes under the sole of your foot, on the day that I act, says the Lord of hosts.

4 Remember the law of Moses my servant, which I commanded him on Horeb for all Israel, the precepts and the judgments.

5 Behold, I will send to you Elijah the prophet, before the arrival of the great and terrible day of the Lord.

1 ALEPH. Blessed are the undefiled in the way, who walk in the law of the Lord.

2 Blessed are they who search his testimonies: that seek him with their whole heart.

3 For they that work iniquity, have not walked in his ways.

4 Thou hast commanded thy commandments to be kept most diligently.

5 O! that my ways may be directed to keep thy justifications.

6 Then shall I not be confounded, when I shall look into all thy commandments.

7 I will praise thee with uprightness of heart, when I shall have learned the judgments of thy justice.

8 I will keep thy justifications: O! do not thou utterly forsake me.

9 BETH. By what doth a young man correct his way? by observing thy words.

10 With my whole heart have I sought after thee: let me not stray from thy commandments.

1 For I want you to know the kind of solicitude that I have for you, and for those who are at Laodicea, as well as for those who have not seen my face in the flesh.

2 May their hearts be consoled and instructed in charity, with all the riches of a plenitude of understanding, with knowledge of the mystery of God the Father and of Christ Jesus.

3 For in him are hidden all treasures of wisdom and knowledge.

4 Now I say this, so that no one may deceive you with grandiose words.

5 For though I may be absent in body, yet I am with you in spirit. And I rejoice as I gaze upon your order and its foundation, which is in Christ, your faith.

6 Therefore, just as you have received the Lord Jesus Christ, walk in him.

7 Be rooted and continually built up in Christ. And be confirmed in the faith, just as you have also learned it, increasing in him with acts of thanksgiving.

8 See to it that no one deceives you through philosophy and empty falsehoods, as found in the traditions of men, in accord with the influences of the world, and not in accord with Christ.

9 For in him, all the fullness of the Divine Nature dwells bodily.

10 And in him, you have been filled; for he is the head of all principality and power.

11 In him also, you have been circumcised with a circumcision not made by hand, not by the despoiling of the body of flesh, but by the circumcision of Christ.

12 You have been buried with him in baptism. In him also, you have risen again through faith, by the work of God, who raised him up from the dead.

13 And when you were dead in your transgressions and in the uncircumcision of your flesh, he enlivened you, together with him, forgiving you of all transgressions,

14 and wiping away the handwriting of the decree which was against us, which was contrary to us. And he has taken this away from your midst, affixing it to the Cross.

15 And so, despoiling principalities and powers, he has led them away confidently and openly, triumphing over them in himself.

16 Therefore, let no one judge you as concerns food or drink, or a particular feast day, or feast days of new moons, or of Sabbaths.

17 For these are a shadow of the future, but the body is of Christ.

18 Let no one seduce you, preferring base things and a religion of Angels, walking according to what he has not seen, being vainly inflated by the sensations of his flesh,

19 and not holding up the head, with which the whole body, by its underlying joints and ligaments, is joined together and grows with an increase that is of God.

20 So then, if you have died with Christ to the influences of this world, why do you still make decisions as if you were living in the world?

21 Do not touch, do not taste, do not handle these things,

22 which all lead to destruction by their very use, in accord with the precepts and doctrines of men.

23 Such ideas have at least an intention to attain to wisdom, but through superstition and debasement, not sparing the body, and they are without any honor in satiating the flesh.