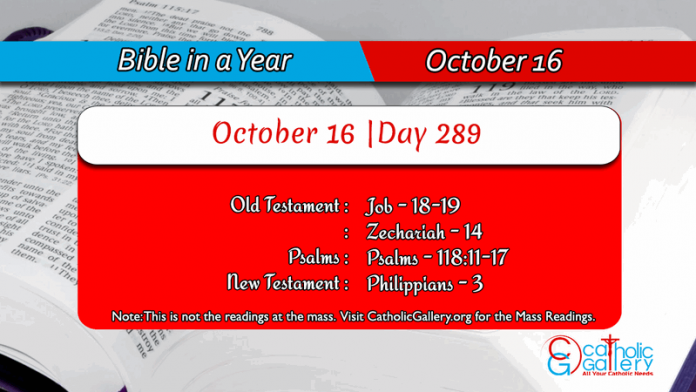 2 How long will you throw around words? Understand first, and then let us speak.

3 Why have we been treated like mules, as if we were unworthy before you?

4 You, who ruins your own soul in your fury, will the earth be forsaken because of you, and will the cliffs be moved from their place?

5 Will not the light of the impious be put out, and the flame of his fire refuse to shine?

6 Light will become darkness in his tabernacle, and the lamp that is over him will be extinguished.

7 His strong steps will be constrained, and his own counsel will cast him down uncontrollably.

8 For he has caused his own feet to go into a net, and he has walked into its web.

9 His heel will be held in a snare, and thirst will rage against him.

10 A trap has been hidden for him in the earth, and a decoy, along his path.

11 Horrifying things will terrify him everywhere and will entangle his feet.

12 Let his strength be diminished by famine, and let starvation invade his ribs.

13 Let it devour the beauty of his skin; let the ancient death consume his arms.

14 Let his confidence be torn away from his tabernacle, and let ruin trample over him like a king.

16 Let his roots be dried up from beneath him, and his harvest be crushed from above.

17 Let the memory of him perish from the earth, and let not his name be celebrated in the streets.

18 He will expel him from light into darkness, and he will remove him from the world.

19 Neither his offspring, nor his descendents, will exist among his people, nor will there be any remnants in his country.

20 The last will be astonished at his day, and the first will be overcome with horror.

21 And so, these are the tabernacles of the sinful, and this the place of he who does not know God.

1 But Job answered by saying:

2 How long will you afflict my soul and wear me down with words?

3 So, ten times you confound me and are not ashamed to oppress me.

4 Now, of course, if I have been ignorant, my ignorance will be with me.

5 But you have risen up against me, and you accuse me to my disgrace.

6 At least now you should understand that God has not afflicted me with a balanced judgment, though he has encompassed me with his scourges.

7 Behold, I will cry out, enduring violence, and no one will hear. I will announce loudly, but there is no one who may judge.

8 He has hemmed in my path, and I cannot pass; he has added darkness to my difficult path.

9 He has plundered me of my glory, and he has stolen the crown from my head.

10 He has destroyed me on every side, and I am lost, and, like an uprooted tree, he has taken away my hope.

11 His fury has raged against me, and in this way he has treated me like his enemy.

13 He has put my brothers far from me, and my friends have withdrawn from me like strangers.

14 My kinsmen have forsaken me, and those who knew me, have forgotten me.

15 The inhabitants of my house and my maidservants treat me just as if I were a stranger, and I have been like an sojourner in their eyes.

16 I called my servant, and he did not respond; I pleaded with him with my own mouth.

17 My wife has shuddered at my breath, and I have begged the sons of my loins.

18 Even the foolish have looked down on me, and, when I withdrew from them, they spoke ill of me.

19 Those who were sometime my counselors, treat me like an abomination; and he whom I valued the most has turned against me.

20 Since my flesh has been consumed, my bone adheres to my skin, and only my lips have been left around my teeth.

21 Have mercy on me, have compassion on me, at least you my friends, because the hand of the Lord has touched me.

22 Why do you pursue me just as God does, and satiate yourselves with my flesh?

24 with an iron pen and a plate of lead, or else be carved in stone?

25 For I know that my Redeemer lives, and on the last day I will rise out of the earth.

26 And I will be enveloped again with my skin, and in my flesh I will see my God.

27 It is he whom I myself will see, and he whom my eyes will behold, and no other. This, my hope, has taken rest in my bosom.

28 Why then do you now say: “Let us pursue him, and let us find a basis to speak against him?”

29 So then, flee from the face of the sword, for the sword is the avenger of iniquities; but know this: there is to be a judgment.

1 Behold, the days of the Lord will arrive, and your spoils will be divided in your midst.

2 And I will gather all the Gentiles in battle against Jerusalem, and the city will be captured, and the houses will be ravaged, and the women will be violated. And the central part of the city will go forth into captivity, and the remainder of the people will not be taken away from the city.

3 Then the Lord will go forth, and he will fight against those Gentiles, just as when he fought in the day of conflict.

6 And this shall be in that day: there will not be light, only cold and frost.

7 And there will be one day, which is known to the Lord, not day and not night. And in the time of the evening, there will be light.

9 And the Lord will be King over all the earth. In that day, there will be one Lord, and his name will be one.

11 And they will dwell in it, and there will be no further anathema, but Jerusalem shall sit securely.

14 And even Judah will fight against Jerusalem. And the riches of all the Gentiles will be gathered together around them: gold, and silver, and more than enough garments.

15 And, like the ruin of the horse, and the mule, and the camel, and the donkey, and all the beasts of burden, which will have been in those encampments, so will be this ruination.

16 And all those who will be the remnant of all the Gentiles that came against Jerusalem, will go up, from year to year, to adore the King, the Lord of hosts, and to celebrate the feast of tabernacles.

17 And this shall be: whoever will not go up, from the families of the earth to Jerusalem, so as to adore the King, the Lord of hosts, there will be no showers upon them.

18 But if even the family of Egypt will go not up, nor approach, neither will it be upon them, but there will be ruin, by which the Lord will strike all the Gentiles, who will not go up to celebrate the feast of tabernacles.

20 In that day, that which is on the bridle of the horse will be holy to the Lord. And even the cooking pots in the house of the Lord will be like holy vessels before the altar.

21 And every cooking pot in Jerusalem and Judah will be sanctified to the Lord of hosts. And all those who make sacrifices will come and take from them, and will cook with them. And the merchant will no longer be in the house of the Lord of hosts, in that day.

11 Surrounding me they compassed me about: and in the name of the Lord I have been revenged on them.

12 They surrounded me like bees, and they burned like fire among thorns: and in the name of the Lord I was revenged on them.

13 Being pushed I was overturned that I might fall: but the Lord supported me.

14 The Lord is my strength and my praise: and he is become my salvation.

15 The voice of rejoicing and of salvation is in the tabernacles of the just.

1 Concerning other things, my brothers, rejoice in the Lord. It is certainly not tiresome for me to write the same things to you, but for you, it is not necessary.

3 For we are the circumcised, we who serve God in the Spirit and who glory in Christ Jesus, having no confidence in the flesh.

5 For I was circumcised on the eighth day, of the stock of Israel, from the tribe of Benjamin, a Hebrew among Hebrews. According to the law, I was a Pharisee;

6 according to zeal, I persecuted the Church of God; according to the justice that is in the law, I lived without blame.

7 But the things which had been to my gain, the same have I considered a loss, for the sake of Christ.

8 Yet truly, I consider everything to be a loss, because of the preeminent knowledge of Jesus Christ, my Lord, for whose sake I have suffered the loss of everything, considering it all to be like dung, so that I may gain Christ,

10 So shall I know him, and the power of his resurrection, and the fellowship of his Passion, having been fashioned according to his death,

11 if, by some means, I might attain to the resurrection which is from the dead.

12 It is not as though I have already received this, or were already perfect. But rather I pursue, so that by some means I might attain, that in which I have already been attained by Christ Jesus.

14 I pursue the destination, the prize of the heavenly calling of God in Christ Jesus.

15 Therefore, as many of us as are being perfected, let us agree about this. And if in anything you disagree, God will reveal this to you also.

16 Yet truly, whatever point we reach, let us be of the same mind, and let us remain in the same rule.

17 Be imitators of me, brothers, and observe those who are walking similarly, just as you have seen by our example.

18 For many persons, about whom I have often told you (and now tell you, weeping,) are walking as enemies of the cross of Christ.

19 Their end is destruction; their god is their belly; and their glory is in their shame: for they are immersed in earthly things.

20 But our way of life is in heaven. And from heaven, too, we await the Savior, our Lord Jesus Christ,

21 who will transform the body of our lowliness, according to the form of the body of his glory, by means of that power by which he is even able to subject all things to himself.