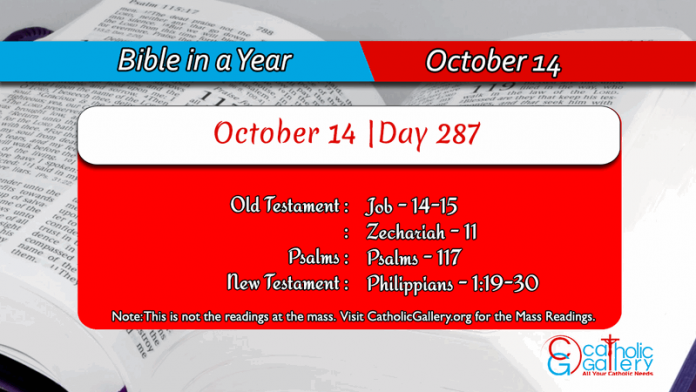 1 Man, born of woman, living for a short time, is filled with many miseries.

2 He comes forth like a flower, and is crushed, and he flees, as if a shadow, and never remains in the same state.

3 And do you consider it fitting to look down with your eyes on someone in this way and to lead him into judgment with you?

4 Who can make him clean who is conceived of unclean seed? Are you not the only one who can?

5 The days of man are short, and the number of his months is with you; you have determined his limits, which cannot be surpassed.

6 Withdraw a little from him, so that he may rest, until his awaited day arrives, like that of the hired hand.

7 A tree has hope: if it has been cut, it turns green again, and its branches spring forth.

8 If its roots grow old in the earth, and its trunk passes into dust,

9 at the scent of water, it will sprout and bring forth leaves, as when it had first been planted.

10 Truly, when a man dies, and has been left unprotected, and has decayed, I ask you where is he?

11 It is as if the waters had receded from the sea and an emptied river had dried up;

12 just so, when a man is fallen asleep, he will not rise again, until the heavens are worn away; he will not awaken, nor rise from his sleep.

13 Who will grant this to me, that you will protect me in the underworld, and hide me until your fury passes by, and establish a time for me, in which you will remember me?

14 Do you suppose that a dead man will live again? On each of the days in which I now battle, I wait until my transformation occurs.

15 You will call me and I will answer you; to the work of your hands, you will extend your right hand.

16 Indeed, you have numbered my steps, but you have been lenient with my sins.

17 You have sealed up my offenses, as if in a purse, but you have cured my iniquity.

18 A falling mountain flows away, and a stone is transferred from its place.

19 Waters wear away stones, and with a flood the land is reduced little by little; and similarly, you will destroy man.

20 You have strengthened him for a little while, so that he may cross over into eternity. You will change his face and send him forth.

21 Whether his sons have been noble or ignoble, he will not understand.

22 And in this way his body, while he yet lives, will have grief, and his soul will mourn over himself.

1 But Eliphaz the Themanite, answering, said:

2 Will a wise man answer as if he were speaking wind, and will he fill his stomach with fire?

3 You rebuke with words he who is not equal to you, and you speak what is not expedient for you,

4 to such an extent that, within yourself, you have expelled reverence and have taken away prayers from the presence of God.

5 For your iniquity has mislead your mouth, and you imitate the tongue of blasphemers.

6 Your own mouth will condemn you, not I; and your own lips will answer you.

7 Are you the first man who was born, or were you formed before the hills?

8 Have you heard the intentions of God, and will his wisdom be inferior to you?

9 What do you know, about which we are ignorant? What do you understand that we do not know?

10 There are with us both aged and ancient men, even more senior than your fathers.

11 Is it so important that God should console you? But your own depraved words prevent this.

12 Why does your heart exalt you, and why do you gaze with your eyes, as if thinking great things?

13 Why does your spirit stir against God, so as to utter such speeches from your mouth?

15 Behold, among his holy ones not one is immutable, and even the heavens are not pure in his sight.

16 How much more abominable and useless is the man who drinks as if from the water of iniquity?

17 I will reveal to you, so listen to me; and I will explain to you what I have seen.

18 The wise acknowledge, and they do not leave behind, their fathers,

19 to whom alone the earth has been given, and no stranger passed among them.

20 The impious is arrogant for all his days, and the number of the years of his tyranny is uncertain.

21 The sound of terror is always in his ears; and when there is peace, he always suspects treason.

22 He does not believe that it is possible for him to be turned from darkness into the light, for he sees around him the sword on every side.

23 When he moves himself to seek bread, he knows that the day of darkness has been prepared for his hand.

24 Tribulation will terrify him, and anguish will prevail over him, like a king who is being prepared to go to battle.

25 For he has extended his hand against God, and he has strengthened himself against the Almighty.

26 He has rushed against him with his throat exposed, and he has been armed with a fat neck.

27 Thickness has covered his face, and lard hangs down from his sides.

28 He has lived in desolate cities and deserted houses, which have been turned into tombs.

29 He will not be enriched, nor will his basic necessities endure, nor will he establish his root in the earth.

30 He will not withdraw from the darkness; the flame will burn up his branches, and he will be defeated by the breath of his own mouth.

31 He will not believe, being vainly deceived by error, that he could be redeemed at any price.

32 Before his time is completed, he will pass into ruin and his hands will wither away.

33 He will be wounded like a grapevine, when its cluster is in first flower, and like an olive tree that casts off its flower.

34 For the congregation of the hypocrites is fruitless, and fire will devour the tabernacles of those who love to accept money.

35 He has conceived sorrow, and he has brought forth iniquity, and his womb prepares deceit.

1 Open your gates, Lebanon, and let fire consume your cedars.

2 Howl, you fir tree, for the cedar has fallen, because the magnificent have been devastated. Howl, you oaks of Bashan, because the secure forest passage has been cut down.

4 Thus says the Lord my God: Feed the flock of the slaughter,

5 which those who possessed them cut down, and they did not feel sorrow, and they sold them, saying: “Blessed be the Lord; we have become wealthy. Even their shepherds did not spare them.”

7 And I will pasture the flock of the slaughter, because of this, O poor of the flock. And I took to myself two staffs: the one I called Handsome, and the other I called Rope, and I pastured the flock.

8 And I cut down three shepherds in one month. And my soul became contracted concerning them, just as their soul also varied concerning me.

9 And I said: I will not pasture you. Whatever dies, let it die. And whatever is cut down, let it be cut down. And let the rest of them devour, each one the flesh of his neighbor.

10 And I took my staff, which was called Handsome, and I tore it apart, so as to invalidate my pact, which I had struck with all of the people.

11 And it became invalid in that day. And so they understood, just like the poor of the flock who stay close to me, that this is the word of the Lord.

12 And I said to them: If it is good in your eyes, bring me my wages. And if not, remain still. And they weighed for my wages thirty silver coins.

14 And I cut short my second staff, which was called Rope, so that I might dissolve the brotherhood between Judah and Israel.

15 And the Lord said to me: Still they are to you the equipment of a foolish shepherd.

16 For behold, I will raise up a shepherd in the land, who will not visit what is forsaken, nor seek what is scattered, nor heal what is broken, nor nourish what remains standing, and he will consume the flesh of the fatted ones and break their hoofs.

17 O shepherd and idol, abandoning the flock, with a sword upon his arm and over his right eye: his arm will be withered by drought, and his right eye will be obscured by darkness.

19 For I know that this will bring me to salvation, through your prayers and under the ministration of the Spirit of Jesus Christ,

20 by means of my own expectation and hope. For in nothing shall I be confounded. Instead, with all confidence, now just as always, Christ shall be magnified in my body, whether by life or by death.

22 And while I live in the flesh, for me, there is the fruit of works. But I do not know which I would choose.

23 For I am constrained between the two: having a desire to be dissolved and to be with Christ, which is the far better thing,

24 but then to remain in the flesh is necessary for your sake.

25 And having this confidence, I know that I shall remain and that I shall continue to remain with all of you, for your advancement and for your joy in the faith,

26 so that your rejoicing may abound in Christ Jesus for me, through my return to you again.

27 Only let your behavior be worthy of the Gospel of Christ, so that, whether I return and see you, or whether, being absent, I hear about you, still you may stand firm with one spirit, with one mind, laboring together for the faith of the Gospel.

28 And in nothing be terrified by the adversaries. For what is to them is an occasion of perdition, is to you an occasion of salvation, and this is from God.

30 engaging in the same struggle, of a kind which you also have seen in me, and which you now have heard from me.