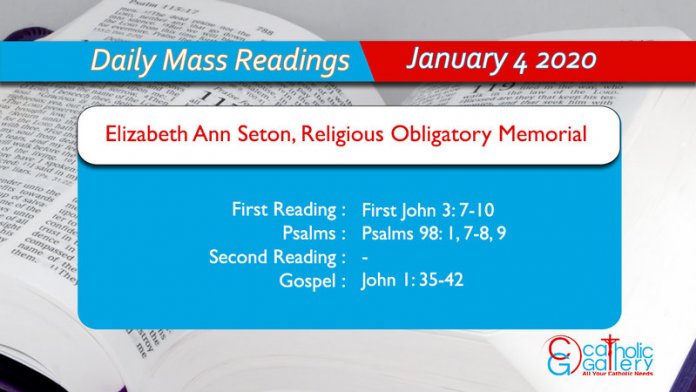 7 Little children, let no man deceive you. He that doth justice is just, even as he is just.

8 He that committeth sin is of the devil: for the devil sinneth from the beginning. For this purpose, the Son of God appeared, that he might destroy the works of the devil.

7 Let the sea be moved and the fulness thereof: the world and they that dwell therein.

8 The rivers shall clap their hands, the mountains shall rejoice together

9 At the presence of the Lord: because he cometh to judge the earth. He shall judge the world with justice, and the people with equity.

35 The next day again John stood, and two of his disciples.

36 And beholding Jesus walking, he saith: Behold the Lamb of God.

37 And the two disciples heard him speak, and they followed Jesus.

38 And Jesus turning, and seeing them following him, saith to them: What seek you? Who said to him, Rabbi, (which is to say, being interpreted, Master,) where dwellest thou?

39 He saith to them: Come and see. They came, and saw where he abode, and they stayed with him that day: now it was about the tenth hour.

40 And Andrew, the brother of Simon Peter, was one of the two who had heard of John, and followed him.

41 He findeth first his brother Simon, and saith to him: We have found the Messias, which is, being interpreted, the Christ.

42 And he brought him to Jesus. And Jesus looking upon him, said: Thou art Simon the son of Jona: thou shalt be called Cephas, which is interpreted Peter.

The readings on this page are taken from the Douay-Rheims Catholic Bible. You can also read the Mass Readings taken from the New Jerusalem Bible, which is used at Mass in most of the English-speaking world. (References, Copyrights).
◄ January – 3 January – 5 ►
By Pradeep Augustine
Print
Facebook
WhatsApp
Twitter
Pinterest