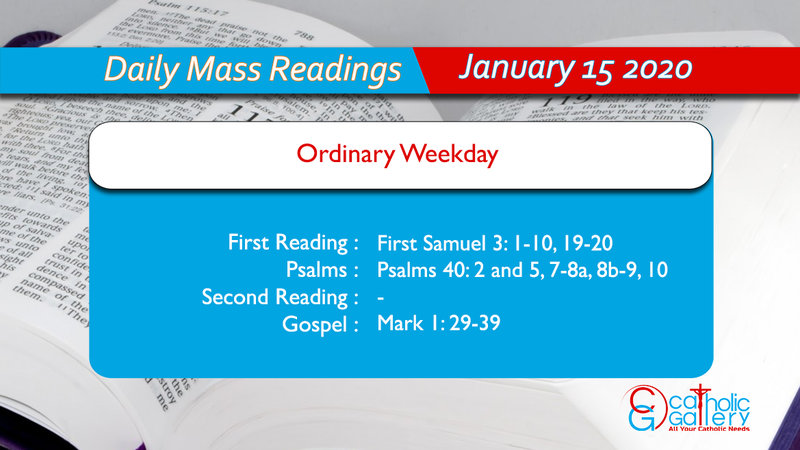 1 Now the child Samuel ministered to the Lord before Heli, and the word of the Lord was precious in those days, there was no manifest vision.

2 And it came to pass one day when Heli lay in his place, and his eyes were grown dim, that he could not see:

3 Before the lamp of God went out, Samuel slept in the temple of the Lord, where the ark of God was.

4 And the Lord called Samuel. And he answered: Here am I.

5 And he ran to Heli and said: Here am I: for thou didst call me. He said: I did not call: go back and sleep. And he went and slept.

6 And the Lord called Samuel again. And Samuel arose and went to Heli, and said: Here am I: for thou calledst me. He answered: I did not call thee, my son: return and sleep.

7 Now Samuel did not yet know the Lord, neither had the word of the Lord been revealed to him.

8 And the Lord called Samuel again the third time. And he arose up and went to Heli.

9 And said: Here am I: for thou didst call me. Then Heli understood that the Lord called the child, and he said to Samuel: Go, and sleep: and if he shall call thee any more, thou shalt say: Speak, Lord, for thy servant heareth. So Samuel went and slept in his place.

10 And the Lord came and stood: and he called, as he had called the other times: Samuel, Samuel. And Samuel said: Speak, Lord, for thy servant heareth.

19 And Samuel grew, and the Lord was with him, and not one of his words fell to the ground.

20 And all Israel from Dan to Bersabee, knew that Samuel was a faithful prophet of the Lord.

2 With expectation I have waited for the Lord, and he was attentive to me.

5 Blessed is the man whose trust is in the name of the Lord; and who hath not had regard to vanities, and lying follies.

29 And immediately going out of the synagogue they came into the house of Simon and Andrew, with James and John.

30 And Simon’s wife’s mother lay in a fit of a fever: and forthwith they tell him of her.

31 And coming to her, he lifted her up, taking her by the hand; and immediately the fever left her, and she ministered unto them.

32 And when it was evening, after sunset, they brought to him all that were ill and that were possessed with devils.

33 And all the city was gathered together at the door.

34 And he healed many that were troubled with divers diseases; and he cast out many devils, and he suffered them not to speak, because they knew him.

35 And rising very early, going out, he went into a desert place: and there he prayed.

36 And Simon, and they that were with him, followed after him.

37 And when they had found him, they said to him: All seek for thee.

38 And he saith to them: Let us go into the neighbouring towns and cities, that I may preach there also; for to this purpose am I come.

39 And he was preaching in their synagogues, and in all Galilee, and casting out devils.

The readings on this page are taken from the Douay-Rheims Catholic Bible. You can also read the Mass Readings taken from the New Jerusalem Bible, which is used at Mass in most of the English-speaking world. (References, Copyrights).
◄ January – 14January – 16 ►
ByPradeep Augustine
Print
Facebook
WhatsApp
Twitter
Pinterest
Linkedin
Email
Telegram
LINE
Viber