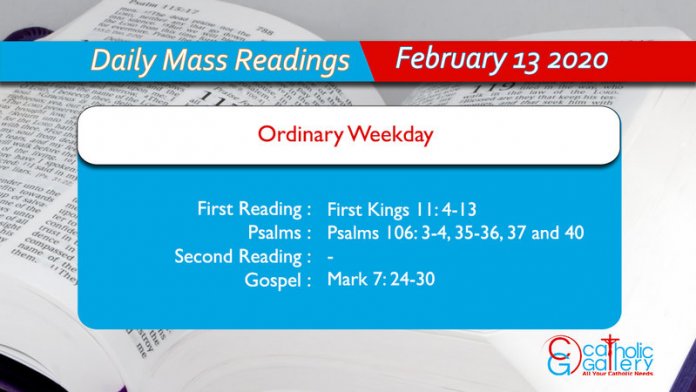 4 And when he was now old, his heart was turned away by women to follow strange gods: and his heart was not perfect with the Lord his God, as was the heart of David his father.

5 But Solomon worshipped Astarthe the goddess of the Sidonians, and Moloch the idol of the ammonites.

6 And Solomon did that which was net pleasing before the Lord, and did not fully follow the Lord, as David his father.

7 Then Solomon built a temple for Chamos the idol of Moab, on the hill that is over against Jerusalem, and for Moloch the idol of the children of Ammon.

8 And he did in this manner for all his wives that were strangers, who burnt incense, and offered sacrifice to their gods.

9 And the Lord was angry with Solomon, because his mind was turned away from the Lord the God of Israel, who had appeared to him twice,

10 And had commanded him concerning this thing, that he should not follow strange gods: but he kept not the things which the Lord commanded him.

11 The Lord therefore said to Solomon: Because thou hast done this, and hast not kept my covenant, and my precepts, which I have commanded thee, I will divide and rend thy kingdom, and will give it to thy servant.

12 Nevertheless in thy days I will not do it, for David thy father’s sake: but I will rend it out of the hand of thy son.

13 Neither will I take away the whole kingdom, but I will give one tribe to thy son for the sake of David my servant, and Jerusalem which I have chosen.

3 Blessed are they that keep judgment, and do justice at all times.

4 Remember us, O Lord, in the favour of thy people: visit us with thy salvation.

35 And they were mingled among the heathens, and learned their works:

36 And served their idols, and it became a stumblingblock to them.

37 And they sacrificed their sons, and their daughters to devils.

40 And the Lord was exceedingly angry with his people: and he abhorred his inheritance.

24 And rising from thence he went into the coasts of Tyre and Sidon: and entering into a house, he would that no man should know it, and he could not be hid.

25 For a woman as soon as she heard of him, whose daughter had an unclean spirit, came in and fell down at his feet.

26 For the woman was a Gentile, a Syrophenician born. And she besought him that he would cast forth the devil out of her daughter.

27 Who said to her: Suffer first the children to be filled: for it is not good to take the bread of the children, and cast it to the dogs.

28 But she answered and said to him: Yea, Lord; for the whelps also eat under the table of the crumbs of the children.

29 And he said to her: For this saying go thy way, the devil is gone out of thy daughter.

30 And when she was come into her house, she found the girl lying upon the bed, and that the devil was gone out.

The readings on this page are taken from the Douay-Rheims Catholic Bible. You can also read the Mass Readings taken from the New Jerusalem Bible, which is used at Mass in most of the English-speaking world. (References, Copyrights).
◄ February – 12 February – 14 ►
By Pradeep Augustine
Print
Facebook
WhatsApp
Twitter
Pinterest
Linkedin
Email
Telegram
LINE
Viber