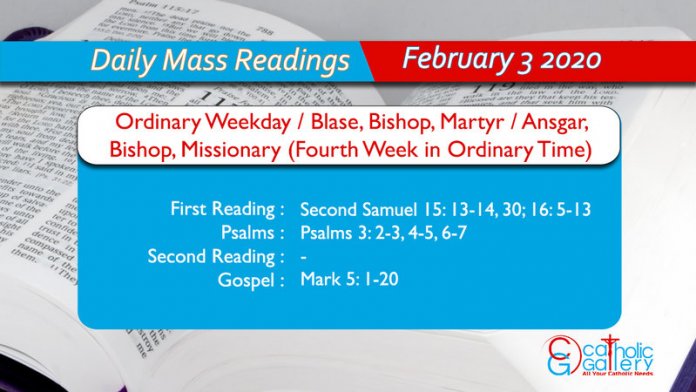 13 And there came a messenger to David, saying: All Israel with their whole heart followeth Absalom.

14 And David said to his servants, that were with him in Jerusalem: Arise and let us flee: for we shall not escape else from the face of Absalom: make haste to go out, lest he come and overtake us, and bring ruin upon us, and smite the city with the edge of the sword.

30 But David went up by the ascent of mount Olivet, going up and weeping, walking barefoot, and with his head covered, and all the people that were with them, went up with their heads covered weeping.

16:5 And king David came as far as Bahurim: and behold there came out from thence a man of the kindred of the house of Saul named Semei, the son of Gera, and coming out he cursed as he went on,

6 And he threw stones at David, and at all the servants of king David: and all the people, and all the warriors walked on the right, and on the left side of the king.

7 And thus said Semei when he cursed the king: Come out, come out, thou man of blood, and thou man of Belial.

9 And Abisai the son of Sarvia said to the king: Why should this dead dog curse my lord the king? I will go, and cut off his head.

10 And the king said: What have I to do with you, ye sons of Sarvia? Let him alone and let him curse: for the Lord hath bid him curse David: and who is he that shall dare say, why hath he done so?

11 And the king said to Abisai, and to all his servants: Behold my son, who came forth from my bowels, seeketh my life: how much more now a son of Jemini? let him alone that he may curse as the Lord hath bidden him.

12 Perhaps the Lord may look upon my affliction, and the Lord may render me good for the cursing of this day.

13 And David and his men with him went by the way. And Semei by the hill’s side went over against him, cursing, and casting stones at him, and scattering earth.

2 Why, O Lord, are they multiplied that afflict me? many are they who rise up against me.

3 Many say to my soul: There is no salvation for him in his God.

4 But thou, O Lord art my protector, my glory, and the lifter up of my head.

5 I have cried to the Lord with my voice: and he hath heard me from his holy hill.

6 I have slept and taken my rest: and I have risen up, because the Lord hath protected me.

7 I will not fear thousands of the people, surrounding me: arise, O Lord; save me, O my God.

The readings on this page are taken from the Douay-Rheims Catholic Bible. You can also read the Mass Readings taken from the New Jerusalem Bible, which is used at Mass in most of the English-speaking world. (References, Copyrights).
◄ February – 2 February – 4 ►
By Pradeep Augustine
Print
Facebook
WhatsApp
Twitter
Pinterest