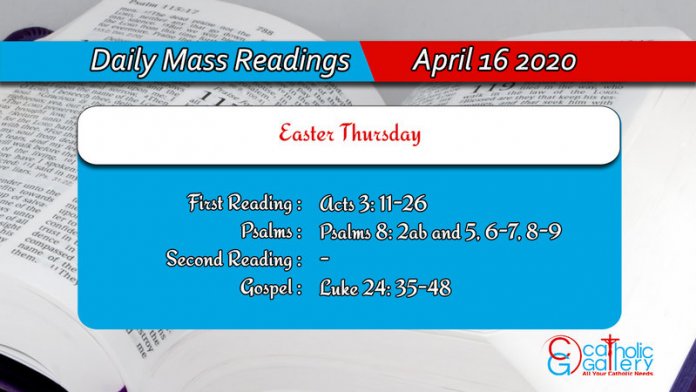 11 And as he held Peter and John, all the people ran to them to the porch which is called Solomon’s, greatly wondering.

12 But Peter seeing, made answer to the people: Ye men of Israel, why wonder you at this? or why look you upon us, as if by our strength or power we had made this man to walk?

13 The God of Abraham, and the God of Isaac, and the God of Jacob, the God of our fathers, hath glorified his Son Jesus, whom you indeed delivered up and denied before the face of Pilate, when he judged he should be released.

14 But you denied the Holy One and the Just, and desired a murderer to be granted unto you.

15 But the author of life you killed, whom God hath raised from the dead, of which we are witnesses.

16 And in the faith of his name, this man, whom you have seen and known, hath his name strengthened; and the faith which is by him, hath given this perfect soundness in the sight of you all.

17 And now, brethren, I know that you did it through ignorance, as did also your rulers.

18 But those things which God before had shewed by the mouth of all the prophets, that his Christ should suffer, he hath so fulfilled.

19 Be penitent, therefore, and be converted, that your sins may be blotted out.

20 That when the times of refreshment shall come from the presence of the Lord, and he shall send him who hath been preached unto you, Jesus Christ,

21 Whom heaven indeed must receive, until the times of the restitution of all things, which God hath spoken by the mouth of his holy prophets, from the beginning of the world.

22 For Moses said: A prophet shall the Lord your God raise up unto you of your brethren, like unto me: him you shall hear according to all things whatsoever he shall speak to you.

23 And it shall be, that every soul which will not hear that prophet, shall be destroyed from among the people.

24 And all the prophets, from Samuel and afterwards, who have spoken, have told of these days.

25 You are the children of the prophets, and of the testament which God made to our fathers, saying to Abraham: And in thy seed shall all the kindreds of the earth be blessed.

26 To you first God, raising up his Son, hath sent him to bless you; that every one may convert himself from his wickedness.

2 O Lord our Lord, how admirable is thy name in the whole earth! For thy magnificence is elevated above the heavens.

36 Now whilst they were speaking these things, Jesus stood in the midst of them, and saith to them: Peace be to you; it is I, fear not.

37 But they being troubled and frightened, supposed that they saw a spirit.

38 And he said to them: Why are you troubled, and why do thoughts arise in your hearts?

39 See my hands and feet, that it is I myself; handle, and see: for a spirit hath not flesh and bones, as you see me to have.

40 And when he had said this, he shewed them his hands and feet.

41 But while they yet believed not, and wondered for joy, he said: Have you any thing to eat?

42 And they offered him a piece of a broiled fish, and a honeycomb.

43 And when he had eaten before them, taking the remains, he gave to them.

44 And he said to them: These are the words which I spoke to you, while I was yet with you, that all things must needs be fulfilled, which are written in the law of Moses, and in the prophets, and in the psalms, concerning me.

45 Then he opened their understanding, that they might understand the scriptures.

46 And he said to them: Thus it is written, and thus it behoved Christ to suffer, and to rise again from the dead, the third day:

47 And that penance and remission of sins should be preached in his name, unto all nations, beginning at Jerusalem.

48 And you are witnesses of these things.

The readings on this page are taken from the Douay-Rheims Catholic Bible. You can also read the Mass Readings taken from the New Jerusalem Bible, which is used at Mass in most of the English-speaking world. (References, Copyrights)
◄ April – 15 April – 17 ►