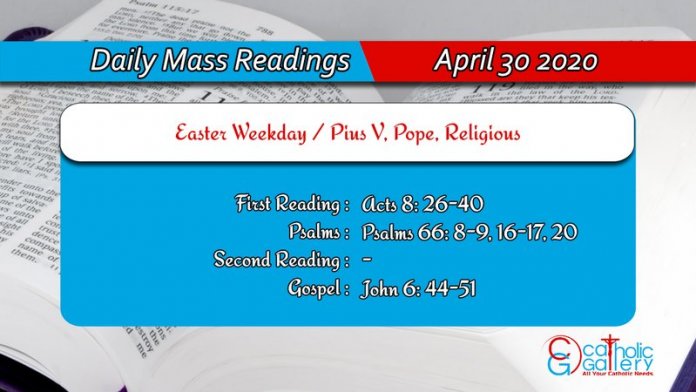 26 Now an angel of the Lord spoke to Philip, saying: Arise, go towards the south, to the way that goeth down from Jerusalem into Gaza: this is desert.

27 And rising up, he went. And behold a man of Ethiopia, an eunuch, of great authority under Candace the queen of the Ethiopians, who had charge over all her treasures, had come to Jerusalem to adore.

28 And he was returning, sitting in his chariot, and reading Isaias the prophet.

29 And the Spirit said to Philip: Go near, and join thyself to this chariot.

30 And Philip running thither, heard him reading the prophet Isaias. And he said: Thinkest thou that thou understandest what thou readest?

31 Who said: And how can I, unless some man shew me? And he desired Philip that he would come up and sit with him.

32 And the place of the scripture which he was reading was this: He was led as a sheep to the slaughter; and like a lamb without voice before his shearer, so openeth he not his mouth.

33 In humility his judgment was taken away. His generation who shall declare, for his life shall be taken from the earth?

34 And the eunuch answering Philip, said: I beseech thee, of whom doth the prophet speak this? of himself, or of some other man?

35 Then Philip, opening his mouth, and beginning at this scripture, preached unto him Jesus.

36 And as they went on their way, they came to a certain water; and the eunuch said: See, here is water: what doth hinder me from being baptized?

37 And Philip said: If thou believest with all thy heart, thou mayest. And he answering, said: I believe that Jesus Christ is the Son of God.

38 And he commanded the chariot to stand still; and they went down into the water, both Philip and the eunuch: and he baptized him.

39 And when they were come up out of the water, the Spirit of the Lord took away Philip; and the eunuch saw him no more. And he went on his way rejoicing.

40 But Philip was found in Azotus; and passing through, he preached the gospel to all the cities, till he came to Caesarea.

8 O bless our God, ye Gentiles: and make the voice of his praise to be heard.

9 Who hath set my soul to live: and hath not suffered my feet to be moved:

16 Come and hear, all ye that fear God, and I will tell you what great things he hath done for my soul.

20 Blessed be God, who hath not turned away my prayer, nor his mercy from me.

44 No man can come to me, except the Father, who hath sent me, draw him; and I will raise him up in the last day.

45 It is written in the prophets: And they shall all be taught of God. Every one that hath heard of the Father, and hath learned, cometh to me.

47 Amen, amen I say unto you: He that believeth in me, hath everlasting life.

49 Your fathers did eat manna in the desert, and are dead.

50 This is the bread which cometh down from heaven; that if any man eat of it, he may not die.

51 I am the living bread which came down from heaven.If any man eat of this bread, he shall live for ever; and the bread that I will give, is my flesh, for the life of the world.

The readings on this page are taken from the Douay-Rheims Catholic Bible. You can also read the Mass Readings taken from the New Jerusalem Bible, which is used at Mass in most of the English-speaking world. (References, Copyrights)
◄ April – 29 May – 1 ►

736,796FansLike
101FollowersFollow
56SubscribersSubscribe
Free Email Updates
Get the Daily Mass Readings, Prayers and Quotes right from your inbox for free.
Give it a try, you can unsubscribe anytime.