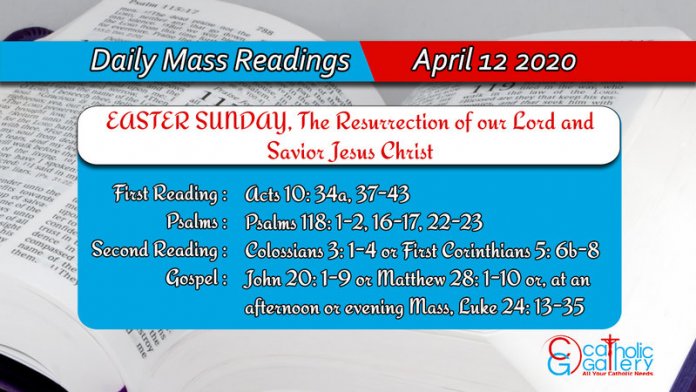 1 And in the end of the sabbath, when it began to dawn towards the first day of the week, came Mary Magdalen and the other Mary, to see the sepulchre.

2 And behold there was a great earthquake. For an angel of the Lord descended from heaven, and coming, rolled back the stone, and sat upon it.

3 And his countenance was as lightning, and his raiment as snow.

4 And for fear of him, the guards were struck with terror, and became as dead men.

5 And the angel answering, said to the women: Fear not you; for I know that you seek Jesus who was crucified.

6 He is not here, for he is risen, as he said. Come, and see the place where the Lord was laid.

7 And going quickly, tell ye his disciples that he is risen: and behold he will go before you into Galilee; there you shall see him. Lo, I have foretold it to you.

8 And they went out quickly from the sepulchre with fear and great joy, running to tell his disciples.

9 And behold Jesus met them, saying: All hail. But they came up and took hold of his feet, and adored him.

10 Then Jesus said to them: Fear not. Go, tell my brethren that they go into Galilee, there they shall see me.

or at an afternoon or evening Mass

The readings on this page are taken from the Douay-Rheims Catholic Bible. You can also read the Mass Readings taken from the New Jerusalem Bible, which is used at Mass in most of the English-speaking world. (References, Copyrights).
◄ April – 11 April – 13 ►
By Pradeep Augustine
Print
Facebook
WhatsApp
Twitter
Pinterest
Linkedin
Email
Telegram
LINE
Viber