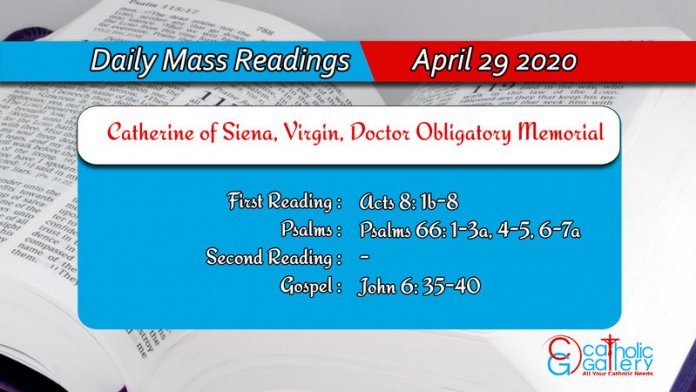 1 And at that time there was raised a great persecution against the church which was at Jerusalem; and they were all dispersed through the countries of Judea, and Samaria, except the apostles.

2 And devout men took order for Stephen’s funeral, and made great mourning over him.

3 But Saul made havock of the church, entering in from house to house, and dragging away men and women, committed them to prison.

4 They therefore that were dispersed, went about preaching the word of God.

5 And Philip going down to the city of Samaria, preached Christ unto them.

6 And the people with one accord were attentive to those things which were said by Philip, hearing, and seeing the miracles which he did.

7 For many of them who had unclean spirits, crying with a loud voice, went out.

8 And many, taken with the palsy, and that were lame, were healed.

1 Unto the end, a canticle of a psalm of the resurrection. Shout with joy to God, all the earth,

2 Sing ye a psalm to his name; give glory to his praise.

3 Say unto God, How terrible are thy works, O Lord! in the multitude of thy strength thy enemies shall lie to thee.

4 Let all the earth adore thee, and sing to thee: let it sing a psalm to thy name.

5 Come and see the works of God; who is terrible in his counsels over the sons of men.

6 Who turneth the sea into dry land, in the river they shall pass on foot: there shall we rejoice in him.

7 Who by his power ruleth for ever: his eyes behold the nations; let not them that provoke him he exalted in themselves.

35 And Jesus said to them: I am the bread of life: he that cometh to me shall not hunger: and he that believeth in me shall never thirst.

36 But I said unto you, that you also have seen me, and you believe not.

37 All that the Father giveth to me shall come to me; and him that cometh to me, I will not cast out.

38 Because I came down from heaven, not to do my own will, but the will of him that sent me.

39 Now this is the will of the Father who sent me: that of all that he hath given me, I should lose nothing; but should raise it up again in the last day.

40 And this is the will of my Father that sent me: that every one who seeth the Son, and believeth in him, may have life everlasting, and I will raise him up in the last day.

The readings on this page are taken from the Douay-Rheims Catholic Bible. You can also read the Mass Readings taken from the New Jerusalem Bible, which is used at Mass in most of the English-speaking world. (References, Copyrights).
◄ April – 28 April – 30 ►
By Pradeep Augustine
Print
Facebook
WhatsApp
Twitter
Pinterest
Linkedin
Email
Telegram
LINE
Viber