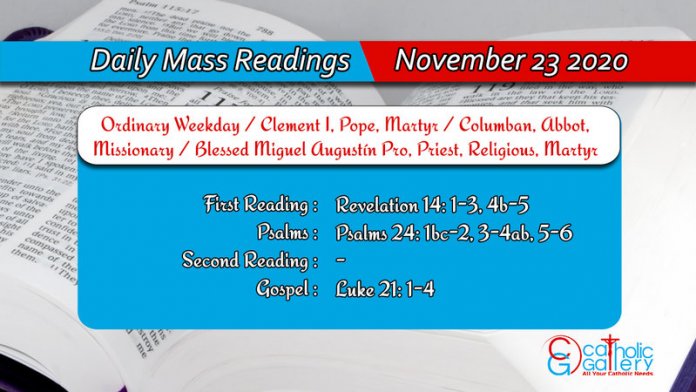 1 And I beheld, and lo a lamb stood upon mount Sion, and with him an hundred forty-four thousand, having his name, and the name of his Father, written on their foreheads.

3 And they sung as it were a new canticle, before the throne, and before the four living creatures, and the ancients; and no man could say the canticle, but those hundred forty-four thousand, who were purchased from the earth.

4 These are they who were not defiled with women: for they are virgins. These follow the Lamb whithersoever he goeth. These were purchased from among men, the firstfruits to God and to the Lamb:

5 And in their mouth there was found no lie; for they are without spot before the throne of God.

1 And looking on, he saw the rich men cast their gifts into the treasury.

2 And he saw also a certain poor widow casting in two brass mites.

3 And he said: Verily I say to you, that this poor widow hath cast in more than they all:

4 For all these have of their abundance cast into the offerings of God: but she of her want, hath cast in all the living that she had.

The readings on this page are taken from the Douay-Rheims Catholic Bible. You can also read the Mass Readings taken from the New Jerusalem Bible, which is used at Mass in most of the English-speaking world. (References, Copyrights).
◄ November – 22 November – 24 ►
By Pradeep Augustine
Print
Facebook
WhatsApp
Twitter
Pinterest