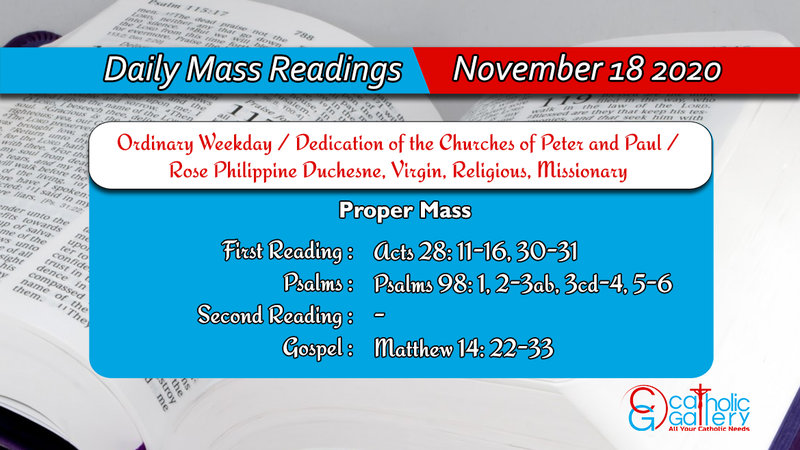 11 And after three months, we sailed in a ship of Alexandria, that had wintered in the island, whose sign was the Castors.

12 And when we were come to Syracusa, we tarried there three days.

13 From thence, compassing by the shore, we came to Rhegium: and after one day, the south wind blowing, we came the second day to Puteoli;

14 Where, finding brethren, we were desired to tarry with them seven days: and so we went to Rome.

15 And from thence, when the brethren had heard of us, they came to meet us as far as Appii Forum, and the Three Taverns: whom when Paul saw, he gave thanks to God, and took courage.

2 The Lord hath made known his salvation: he hath revealed his justice in the sight of the Gentiles.

3 He hath remembered his mercy his truth toward the house of Israel. All the ends of the earth have seen the salvation of our God.

4 Sing joyfully to God, all the earth; make melody, rejoice and sing.

6 With long trumpets, and sound of comet. Make a joyful noise before the Lord our king:

22 And forthwith Jesus obliged his disciples to go up into the boat, and to go before him over the water, till he dismissed the people.

23 And having dismissed the multitude, he went into a mountain alone to pray. And when it was evening, he was there alone.

24 But the boat in the midst of the sea was tossed with the waves: for the wind was contrary.

25 And in the fourth watch of the night, he came to them walking upon the sea.

26 And they seeing him walk upon the sea, were troubled, saying: It is an apparition. And they cried out for fear.

27 And immediately Jesus spoke to them, saying: Be of good heart: it is I, fear ye not.

28 And Peter making answer, said: Lord, if it be thou, bid me come to thee upon the waters.

29 And he said: Come. And Peter going down out of the boat, walked upon the water to come to Jesus.

30 But seeing the wind strong, he was afraid: and when he began to sink, he cried out, saying: Lord, save me.

31 And immediately Jesus stretching forth his hand took hold of him, and said to him: O thou of little faith, why didst thou doubt?

32 And when they were come up into the boat, the wind ceased.

33 And they that were in the boat came and adored him, saying: Indeed thou art the Son of God.

The readings on this page are taken from the Douay-Rheims Catholic Bible. You can also read the Mass Readings taken from the New Jerusalem Bible, which is used at Mass in most of the English-speaking world. (References, Copyrights).
◄ November – 17 November – 19 ►
By Pradeep Augustine
Print
Facebook
WhatsApp
Twitter
Pinterest
Linkedin
Email
Telegram
LINE
Viber