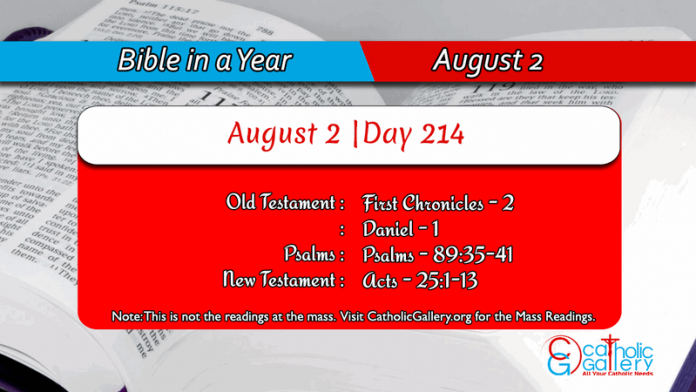 1 And the sons of Israel: Reuben, Simeon, Levi, Judah, Issachar, and Zebulun,

3 The sons of Judah: Er, Onan, and Shelah. These three were born to him from the daughter of Shua, the Canaanite. But Er, the firstborn of Judah, was evil in the sight of the Lord, and so he killed him.

4 Now Tamar, his daughter-in-law, bore to him Perez and Zerah. Therefore, all the sons of Judah were five.

5 And the sons of Perez: Hezron and Hamul.

6 Also, the sons of Zerah: Zimri, and Ethan, and Heman, as well as Calcol and Dara, five altogether.

7 The sons of Carmi: Achar, who disturbed Israel and sinned by the theft of what was anathema.

8 The sons of Ethan: Azariah.

9 And the sons of Hezron who were born to him: Jerahmeel, and Ram, and Chelubai.

10 Then Ram conceived Amminadab. And Amminadab conceived Nahshon, a leader of the sons of Judah.

11 Also, Nahshon conceived Salma, from whom Boaz rose up.

14 the fourth Nethanel, the fifth Raddai,

15 the sixth Ozem, the seventh David.

16 Their sisters were Zeruiah and Abigail. The sons of Zeruiah: Abishai, Joab, and Asahel, three.

17 And Abigail conceived Amasa, whose father was Jether, the Ishmaelite.

18 Truly, Caleb, the son of Hezron, took a wife named Azubah, of whom he conceived Jerioth. And her sons were Jesher, and Shobab, and Ardon.

19 And when Azubah had died, Caleb took as wife Ephratha, who bore to him Hur.

21 And afterwards, Hezron entered to the daughter of Machir, father of Gilead. And he took her when he was sixty years old. And she bore to him Segub.

22 And then Segub conceived Jair, and he possessed twenty-three cities in the land of Gilead.

23 And he seized Geshur and Aram, towns of Jair, and Kenath and its villages, sixty cities. All these were sons of Machir, father of Gilead.

24 Then, when Hezron had died, Caleb entered to Ephratha. Also, Hezron had as wife Abia, who bore to him Ashhur, the father of Tekoa.

25 Now sons were born to Jerahmeel, the firstborn of Hezron: Ram, his firstborn, and Bunah, and Oren, and Ozem, and Ahijah.

26 Jerahmeel also married another wife, named Atarah, who was the mother of Onam.

27 Then too, the sons of Ram, the firstborn of Jerahmeel, were Maaz, Jamin, and Eker.

28 And Onam had sons: Shammai and Jada. And the sons of Shammai: Nadab and Abishur.

29 Truly, the name of the wife of Abishur was Abihail, who bore to him Ahban and Molid.

30 Now the sons of Nadab were Seled and Appaim. And Seled died without children.

31 Truly, the son of Appaim was Ishi. And Ishi conceived Sheshan. Then Sheshan conceived Ahlai.

32 But the sons of Jada, the brother of Shammai, were Jether and Jonathan. Then Jether also died without children.

33 And Jonathan conceived Peleth and Zaza. These were the sons of Jerahmeel.

34 Now Sheshan did not have sons, but only daughters, and an Egyptian servant named Jarha.

35 And so he gave to him his daughter as wife, who bore to him Attai.

43 Now the sons of Hebron were Korah, and Tapuah, and Rekem, and Shema.

44 Then Shema conceived Raham, the father of Jorkeam. And Rekem conceived Shammai.

45 The son of Shammai was Maon, and Maon was the father of Bethzur.

46 Now Ephah, the concubine of Caleb, bore Haran, and Moza, and Gazez. And Haran conceived Gazez.

47 And the sons of Jahdai: Regem, and Jotham, and Geshan, and Pelet, and Ephah, and Shaaph.

48 And Maacah, the concubine of Caleb, bore Sheber and Tirhanah.

50 These were the sons of Caleb, the son of Hur, the firstborn of Ephratha: Shobal, the father of Kiriath-jearim;

52 Now there were sons for Shobal, the father of Kiriath-jearim, who saw half the places of rest.

54 The sons of Salma: Bethlehem, and the Netophathites, the crowns of the house of Joab, and half the places of rest of the Zorathites,

55 as well as the families of the scribes living in Jabesh, those singing and making music, and those dwelling in tents. These are the Kenites, who went forth from Calor, the father of the house of Rechab.

1 In the third year of the reign of Jehoiakim king of Judah, Nebuchadnezzar king of Babylon came to Jerusalem and besieged it.

2 And the Lord delivered into his hand Jehoiakim the king of Judah and a portion of the vessels of the house of God. And he carried them away into the land of Shinar, to the house of his god, and he brought the vessels into the treasure chamber of his god.

3 And the king told Ashpenaz, the chief of the eunuchs, that he should bring in some of the sons of Israel, and some of the offspring of the king and of the sovereigns:

4 young men, in whom there was no blemish, noble in appearance, and accomplished in all wisdom, cautious in knowledge, and well-educated, and who could stand in the palace of the king, so that he might teach them the letters and the language of the Chaldeans.

5 And the king appointed for them provisions for each day, from his own food and from the wine which he himself drank, so that, after being nourished for three years, they would stand in the sight of the king.

6 Now, among those of the sons of Judah, there were Daniel, Hananiah, Mishael, and Azariah.

7 And the chief of the eunuchs assigned names to them: to Daniel, Belteshazzar; to Hananiah, Shadrach; to Mishael, Meshach; and to Azariah, Abednego.

8 But Daniel resolved in his heart that he would not be polluted with the king’s meal, nor with the wine he drank, and he requested of the chief of the eunuchs that he might not be contaminated.

9 And so God gave Daniel grace and mercy in the sight of the leader of the eunuchs.

10 And the leader of the eunuchs said to Daniel, “I am afraid of my lord the king, who has appointed food and drink for you, who, if he should see that your faces are leaner than those of the other youths your age, you would condemn my head to the king.”

11 And Daniel said to Malasar, whom the leader of the eunuchs had appointed over Daniel, Hananiah, Mishael, and Azariah,

12 I beg you to test us, your servants, for ten days, and let roots be given to us to eat and water to drink,

13 and then observe our faces, and the faces of the children who eat the king’s food, and then deal with your servants according to what you see.”

14 When he had heard these words, he tested them for ten days.

15 But, after ten days, their faces appeared better and fatter than all the children who had eaten from the king’s food.

16 Thereafter, Malasar took away their portions and their wine for drinking, and he gave them roots.

17 Yet, to these children, God gave knowledge and instruction in every book, and wisdom, but to Daniel, also the understanding of all visions and dreams.

18 And when the time was completed, after which the king had said that they would be brought in, the chief of the eunuchs brought them in before the sight of Nebuchadnezzar.

19 And, when the king conversed with them, there had not been found any so great in all the world as Daniel, Hananiah, Mishael, and Azariah; and so they stood in the sight of the king.

20 And in every concept of wisdom and understanding, about which the king consulted with them, he found them to be ten times better than all the seers and astrologers put together, who were in his entire kingdom.

21 And so Daniel remained, even until the first year of king Cyrus.

35 Neither will I profane my covenant: and the words that proceed from my mouth I will not make void.

36 Once have I sworn by my holiness: I will not lie unto David:

37 His seed shall endure for ever.

38 And his throne as the sun before me: and as the moon perfect for ever, and a faithful witness in heaven.

39 But thou hast rejected and despised: thou hast been angry with thy anointed.

40 Thou hast overthrown the covenant of thy servant: thou hast profaned his sanctuary on the earth.

41 Thou hast broken down all his hedges: thou hast made his strength fear.

1 And so, when Festus had arrived in the province, after three days, he ascended to Jerusalem from Caesarea.

2 And the leaders of the priests, and those first among the Jews, went to him against Paul. And they were petitioning him,

3 asking for favor against him, so that he would order him to be led to Jerusalem, where they were maintaining an ambush in order to kill him along the way.

4 But Festus responded that Paul was to be kept in Caesarea, and that he himself would soon go there.

5 Therefore, he said, “let those among you who are able, descend at the same time, and if there is any guilt in the man, they may accuse him.”

6 Then, having stayed among them no more than eight or ten days, he descended to Caesarea. And on the next day, he sat in the judgment seat, and he ordered Paul to be led in.

7 And when he had been brought, the Jews who had come down from Jerusalem stood around him, throwing out many serious accusations, none of which they were able to prove.

9 But Festus, wanting to show greater favor to the Jews, responded to Paul by saying: “Are you willing to ascend to Jerusalem and to be judged there about these things before me?”

10 But Paul said: “I stand in Caesar’s tribunal, which is where I ought to be judged. I have done no harm to the Jews, as you well know.

11 For if I have harmed them, or if I have done anything deserving of death, I do not object to dying. But if there is nothing to these things about which they accuse me, no one is able to deliver me to them. I appeal to Caesar.”

12 Then Festus, having spoken with the council, responded: “You have appealed to Caesar, to Caesar you shall go.”

13 And when some days had passed, king Agrippa and Bernice descended to Caesarea, to greet Festus.

◄ August 1 August 3 ►
Bible in a year – Index
July September October
Simplest Bible in a Year plan compiled using the “Catholic Public Domain Version Bible“. This is not the Readings at the Mass. For the Mass Readings, check the Mass Readings taken from the New Jerusalem Bible or the Douay-Rheims Catholic Bible.
By Pradeep Augustine
Print
Facebook
WhatsApp
Twitter
Pinterest