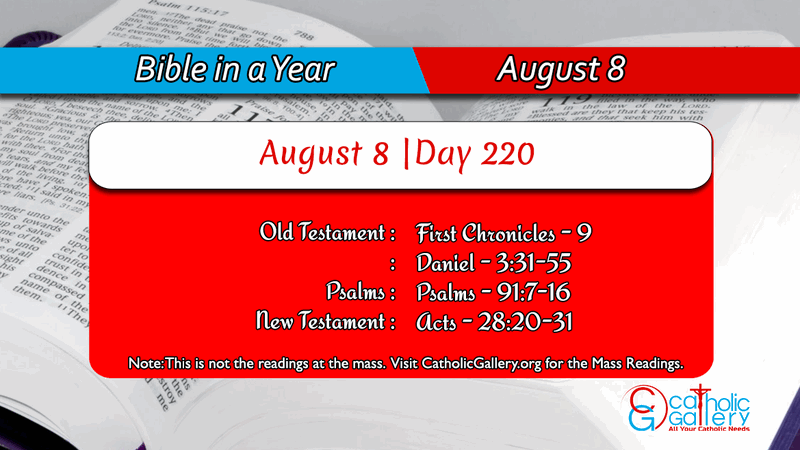 1 And so, all of Israel was numbered. And the sum of them was written in the book of the kings of Israel and of Judah. And they were taken away to Babylon because of their transgression.

2 Now the first who lived in their possessions and in their cities were Israel, and the priests, and the Levites, and the temple servants.

5 And from Shiloni: Asaiah the firstborn, and his sons.

6 Then from the sons of Zerah: Jeuel, and their brothers, six hundred ninety.

10 And from the priests: Jedaiah, Jehoiarib, and Jachin;

13 and also their brothers, leaders according to their families, one thousand seven hundred sixty, very strong experience men, for the work of the ministry in the house of God.

17 Now the gatekeepers were Shallum, and Akkub, and Talmon, and Ahiman; and their brother Shallum was the leader.

18 For until that time, at the gate of the king to the east, the sons of Levi served in their turns.

19 Truly, Shallum, the son of Kore, the son of Ebiasaph, the son of Korah, with his brothers and his father’s house, these Korahites, were over the works of the ministry of keeping the vestibules of the tabernacle. And their families, in turns, were keepers of the entrance to the camp of the Lord.

20 Now Phinehas, the son of Eleazar, was their ruler before the Lord.

21 But Zechariah, the son of Meshelemiah, was the keeper of the gate of the tabernacle of the testimony.

22 All these, chosen as porters for the gates, were two hundred twelve. And they were recorded in their own towns, those whom David, and the seer Samuel, appointed, in their faith,

23 as with them, so also with their sons, at the gates of the house of the Lord and the tabernacle, by their turns.

25 Now their brothers were staying in the villages, and they arrived on their Sabbaths, from time to time.

26 To these four Levites were entrusted the entire number of the gatekeepers, and they were over the chambers and storehouses of the house of the Lord.

27 And they remained in their watches, on all sides of the temple of the Lord, so that, when the time had arrived, they might open the gates in the morning.

28 Some from their kindred were also over the vessels of the ministry. For the vessels were both carried in and carried out according to number.

29 Some of them also were entrusted with the equipment of the sanctuary; they were in charge of the fine wheat flour, and the wine, and the oil, and the frankincense, and the aromatics.

30 Now the sons of the priests composed the ointments from the aromatics.

31 And Mattithiah, a Levite, the firstborn of Shallum the Korahite, was in charge of those things that were cooked in a frying pan.

32 Now some of the sons of Kohath, their brothers, were over the bread of the presence, so that they might continually prepare it new for each Sabbath.

33 These are the leaders of the singing men, according to the families of the Levites, who were dwelling in the chambers, so that they might carry out their ministry continually, day and night.

34 The heads of the Levites, leaders according to their families, abode in Jerusalem.

35 Now in Gibeon, there lived Jeiel, the father of Gibeon, and the name of his wife was Maacah.

36 His firstborn son was Abdon, and then Zur, and Kish, and Baal, and Ner, and Nadab,

37 as well as Gedor, and Ahio, and Zechariah, and Mikloth.

40 And the son of Jonathan was Meribbaal. And Meribbaal conceived Micah.

41 Now the sons of Micah were Pithon, and Melech, and Tahrea, and Ahaz.

42 And Ahaz conceived Jarah. And Jarah conceived Alemeth, and Azmaveth, and Zimri. Then Zimri conceived Moza.

43 Truly, Moza conceived Binea, whose son, Rephaiah, conceived Eleasah, from of whom was born Azel.

44 Now Azel had six sons, whose names are: Azrikam, Bocheru, Ishmael, Sheariah, Obadiah, Hanan. These are the sons of Azel.

33 And now we are not able to open our mouths. We have become a shame and a disgrace to your servants and to those who worship you.

34 Do not hand us over forever, we ask you, because of your name, and do not abolish your covenant.

35 And do not withdraw your mercy from us, because of Abraham, your beloved, and Isaac, your servant, and Israel, your holy one.

36 You have spoken with them, promising that you would multiply their offspring like the stars of heaven and like the sand on the seashore.

37 For we, O Lord, are diminished more than all other peoples, and we are brought low throughout all the earth, this day, because of our sins.

38 Neither is there, at this time, a leader, or a ruler, or a prophet, nor any holocaust, or sacrifice, or oblation, or incense, or place of first fruits, in your eyes,

39 so that we may be able to find your mercy. Nevertheless, with a contrite soul and humble spirit, let us be accepted.

40 Just as in the holocausts of rams and bullocks, and as in thousands of fat lambs, so let our sacrifice be in your sight this day, in order to please you. For there is no shame for those who trust in you.

41 And now we follow you wholeheartedly, and we fear you, and we seek your face.

42 Do not put us to shame, but deal with us in agreement with your clemency and according to the multitude of your mercies.

43 And rescue us by your wonders and give glory to your name, O Lord.

44 And let all those be confounded who lead your servants towards evil. May they be confounded by all your power and may their strength be crushed.

45 And may they know that you are the Lord, the only God, and glorious above the world.”

46 And they did not cease, those attendants of the king who had cast them in, to heat the furnace with oil, and flax, and pitch, and brush.

47 And the flame streamed forth above the furnace for forty-nine cubits.

48 And the fire erupted and burnt those of the Chaldeans within its reach near the furnace.

49 But the angel of the Lord descended with Azariah and his companions into the furnace; and he cast the flame of the fire out of the furnace.

50 And he made the middle of the furnace like the blowing of a damp wind, and the fire did not touch them, nor afflict them, nor bother them at all.

51 Then these three, as if with one voice, praised and glorified and blessed God, in the furnace, saying:

53 Blessed are you in the holy temple of your glory: praiseworthy above all and exalted above all forever.

54 Blessed are you on the throne of your kingdom: praiseworthy above all and exalted above all forever.

55 Blessed are you who beholds the abyss and sits upon the cherubims: praiseworthy and exalted above all forever.

7 A thousand shall fall at thy side, and ten thousand at thy right hand: but it shall not come nigh thee.

8 But thou shalt consider with thy eyes: and shalt see the reward of the wicked.

9 Because thou, O Lord, art my hope: thou hast made the most High thy refuge.

10 There shall no evil come to thee: nor shall the scourge come near thy dwelling.

11 For he hath given his angels charge over thee; to keep thee in all thy ways.

12 In their hands they shall bear thee up: lest thou dash thy foot against a stone.

13 Thou shalt walk upon the asp and the basilisk: and thou shalt trample under foot the lion and the dragon.

14 Because he hoped in me I will deliver him: I will protect him because he hath known my name.

15 He shall cry to me, and I will hear him: I am with him in tribulation, I will deliver him, and I will glorify him.

16 I will fill him with length of days; and I will shew him my salvation.

20 And so, because of this, I requested to see you and to speak to you. For it is because of the hope of Israel that I am encircled with this chain.”

21 But they said to him: “We have not received letters about you from Judea, nor have any of the other new arrivals among the brothers reported or spoken anything evil against you.

22 But we are asking to hear your opinions from you, for concerning this sect, we know that it is being spoken against everywhere.”

23 And when they had appointed a day for him, very many persons went to him at his guest quarters. And he discoursed, testifying to the kingdom of God, and persuading them about Jesus, using the law of Moses and the Prophets, from morning until evening.

24 And some believed the things that he was saying, yet others did not believe.

25 And when they could not agree among themselves, they departed, while Paul was speaking this one word: “How well did the Holy Spirit speak to our fathers through the prophet Isaiah,

26 saying: ‘Go to this people and say to them: Hearing, you shall hear and not understand, and seeing, you shall see and not perceive.

27 For the heart of this people has grown dull, and they have listened with reluctant ears, and they have closed their eyes tightly, lest perhaps they might see with the eyes, and hear with the ears, and understand with the heart, and so be converted, and I would heal them.’

28 Therefore, let it be known to you, that this salvation of God has been sent to the Gentiles, and they shall listen to it.”

29 And when he had said these things, the Jews went away from him, though they still had many questions among themselves.

30 Then he remained for two whole years in his own rented lodgings. And he received all who went in to him,

31 preaching the kingdom of God and teaching the things which are from the Lord Jesus Christ, with all faithfulness, without prohibition.