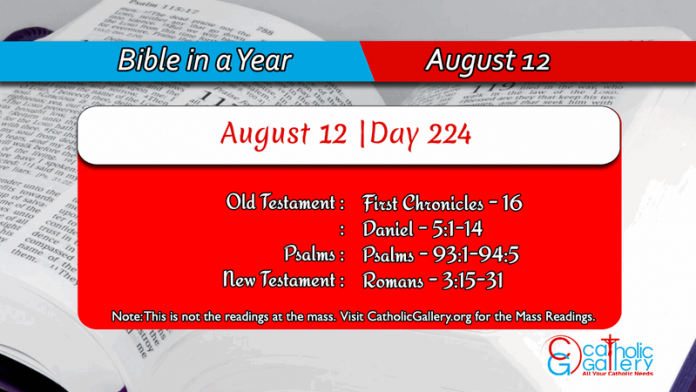 1 And so they took the ark of God, and they set it in the midst of the tabernacle, which David had pitched for it. And they offered holocausts and peace offerings before God.

2 And when David had completed offering holocausts and peace offerings, he blessed the people in the name of the Lord.

3 And he divided to every single one, from men even to women, a twist of bread, and a piece of roasted beef, and fine wheat flour fried with oil.

4 And he appointed some from the Levites who would minister before the ark of the Lord, and commemorate his works, and glorify and praise the Lord, the God of Israel.

5 Asaph was the leader, and second to him was Zechariah. In addition, there were Jeiel, and Shemiramoth, and Jehiel, and Mattithiah, and Eliab, and Benaiah, and Obededom. And Jeiel was over the instruments of the psaltery and the harps. But Asaph sounded out with the cymbals.

6 Truly, the priests, Benaiah and Jahaziel, were to sound the trumpet continually before the ark of the covenant of the Lord.

7 In that day, David made Asaph the leader, in order to confess to the Lord with his brothers:

8 Confess to the Lord, and invoke his name. Make known his endeavors among the peoples.

10 Praise his holy name! Let the heart of those who seek the Lord rejoice!

11 Seek the Lord and his virtue. Seek his face always.

12 Remember his miracles, which he has accomplished, his signs, and the judgments of his mouth.

13 O offspring of Israel, his servants! O sons of Jacob, his elect!

14 He is the Lord our God. His judgments are throughout all the earth.

15 Remember forever his covenant, the word that he instructed unto a thousand generations,

16 the covenant that he formed with Abraham, and his oath with Isaac.

17 And he appointed the same to Jacob as a precept, and to Israel as an everlasting pact,

18 saying: ‘To you, I will give the land of Canaan, the lot of your inheritance.’

19 At that time, they were small in number, they were few and were settlers there.

20 And they passed through, from nation to nation, and from one kingdom to another people.

21 He did not permit anyone to falsely accuse them. Instead, he reproved kings on their behalf:

22 ‘Do not touch my Christ. And do not malign my prophets.’

23 Sing to the Lord, all the earth! Announce his salvation, from day to day.

24 Describe his glory among the Gentiles, his miracles among all the peoples.

25 For the Lord is great and exceedingly praiseworthy. And he is terrible, above all gods.

26 For all the gods of the peoples are idols. But the Lord made the heavens.

27 Confession and magnificence are before him. Strength and gladness are in his place.

29 Give glory to the Lord, to his name. Lift up sacrifice, and approach before his sight. And adore the Lord in holy attire.

30 Let all the earth be moved before his face. For he founded the globe immoveable.

31 Let the heavens rejoice, and let the earth exult. And let them say among the nations, ‘The Lord has reigned.’

32 Let the sea roar, with all its plenitude. Let the fields exult, with all that is in them.

33 Then the trees of the forest will give praise before the Lord. For he comes to judge the earth.

34 Confess to the Lord, for he is good. For his mercy is eternal.

35 And say: ‘Save us, O God our savior! And gather us together, and rescue us from the nations, so that we may confess to your holy name, and may exult in your songs.

36 Blessed be the Lord, the God of Israel, from eternity to eternity.’ And let all the people say, ‘Amen,’ and let them sing a hymn to the Lord.”

37 And so, there before the ark of the covenant of the Lord, he left Asaph and his brothers, so that they might minister in the sight of the ark continually, throughout each day, and in their turns.

38 Now Obededom and his brothers were sixty-eight. And he appointed Obededom, the son of Jeduthun, and Hosah to be porters.

39 But Zadok the priest, and his brothers the priests, were before the tabernacle of the Lord in the high place, which was in Gibeon,

40 so that they could offer holocausts to the Lord upon the altar of holocausts continually, morning and evening, according to all that was written in the law of the Lord, which he instructed to Israel.

41 And after him, Heman, and Jeduthun, and the remainder of the elect, each one by his name, were appointed to confess to the Lord: “For his mercy endures forever.”

42 Also Heman and Jeduthun sounded the trumpet, and they played upon the cymbals, and upon every kind of musical instrument, in order to sing praises to God. But the sons of Jeduthun he made to be porters.

43 And all the people returned to their houses, and David also, so that he might bless his own house too.

1 Belshazzar, the king, made a great feast for a thousand of his nobles, and each one of them drank according to his age.

2 And so, when they were drunk, he instructed that the vessels of gold and silver should be brought, which Nebuchadnezzar, his father, had carried away from the temple, which was in Jerusalem, so that the king, and his nobles, and his wives, and the concubines, might drink from them.

3 Then the gold and silver vessels were presented, which he had carried away from the temple and which had been in Jerusalem, and the king, and his nobles, wives, and concubines, drank from them.

4 They drank wine, and they praised their gods of gold, and silver, brass, iron, and wood and stone.

5 In the same hour, there appeared fingers, as of the hand of a man, writing on the surface of the wall, opposite the candlestick, in the king’s palace. And the king observed the part of the hand that wrote.

6 Then the king’s countenance was changed, and his thoughts disturbed him, and he lost his self-control, and his knees knocked against one other.

7 And the king cried out loudly for them to bring in the astrologers, Chaldeans, and soothsayers. And the king proclaimed to the wise men of Babylon, saying, “Whoever will read this writing and make known to me its interpretation will be clothed with purple, and will have a golden chain on his neck, and will be third in my kingdom.”

8 Then, in came all the wise men of the king, but they could neither read the writing, nor reveal the interpretation to the king.

9 Therefore, king Belshazzar was quite confused, and his face was altered, and even his nobles were disturbed.

10 But the queen, because of what had happened to the king and his nobles, entered the banquet house. And she spoke out, saying, “O king, live forever. Do not let your thoughts confuse you, neither should your face be altered.

11 There is a man in your kingdom, who has the spirit of the holy gods within himself, and in the days of your father, knowledge and wisdom were found in him. For king Nebuchadnezzar, your father, appointed him leader of the astrologers, enchanters, Chaldeans, and soothsayers, even your father, I say to you, O king.

12 For a greater spirit, and foresight, and understanding, and interpretation of dreams, and the revealing of secrets, and the solution to difficulties were found in him, that is, in Daniel, to whom the king gave the name Belteshazzar. Now, therefore, let Daniel be summoned, and he will explain the interpretation.”

13 Then Daniel was brought in before the king. And the king spoke to him, saying, “Are you Daniel, of the sons of the captivity of Judah, whom my father the king led out of Judea?

14 I have heard of you, that you have the spirit of the gods, and that greater knowledge, as well as understanding and wisdom, have been found in you.

1 The Lord hath reigned, he is clothed with beauty: the Lord is clothed with strength, and hath girded himself. For he hath established the world which shall not be moved.

2 Thy throne is prepared from of old: thou art from everlasting.

4 With the noise of many waters. Wonderful are the surges of the sea: wonderful is the Lord on high.

5 Thy testimonies are become exceedingly credible: holiness becometh thy house, O Lord, unto length of days.

1 The Lord is the God to whom revenge belongeth: the God of revenge hath acted freely.

2 Lift up thyself, thou that judgest the earth: render a reward to the proud.

4 Shall they utter, and speak iniquity: shall all speak who work injustice?

5 Thy people, O Lord, they have brought low: and they have afflicted thy inheritance.

15 Their feet are swift to shed blood.

16 Grief and unhappiness are in their ways.

17 And the way of peace they have not known.

18 There is no fear of God before their eyes.”

19 But we know that whatever the law speaks, it speaks to those who are in the law, so that every mouth may be silenced and the entire world may be subject to God.

20 For in his presence no flesh shall be justified by the works of the law. For knowledge of sin is through the law.

21 But now, without the law, the justice of God, to which the law and the prophets have testified, has been made manifest.

22 And the justice of God, though the faith of Jesus Christ, is in all those and over all those who believe in him. For there is no distinction.

23 For all have sinned and all are in need of the glory of God.

24 We have been justified freely by his grace through the redemption that is in Christ Jesus,

25 whom God has offered as a propitiation, through faith in his blood, to reveal his justice for the remission of the former offenses,

26 and by the forbearance of God, to reveal his justice in this time, so that he himself might be both the Just One and the Justifier of anyone who is of the faith of Jesus Christ.

27 So then, where is your self-exaltation? It is excluded. Through what law? That of works? No, but rather through the law of faith.

28 For we judge a man to be justified by faith, without the works of the law.

30 For One is the God who justifies circumcision by faith and uncircumcision through faith.

31 Are we then destroying the law through faith? Let it not be so! Instead, we are making the law stand.

◄ August 11 August 13 ►
Bible in a year – Index
July September October
Simplest Bible in a Year plan compiled using the “Catholic Public Domain Version Bible“. This is not the Readings at the Mass. For the Mass Readings, check the Mass Readings taken from the New Jerusalem Bible or the Douay-Rheims Catholic Bible.
By Pradeep Augustine
Print
Facebook
WhatsApp
Twitter
Pinterest