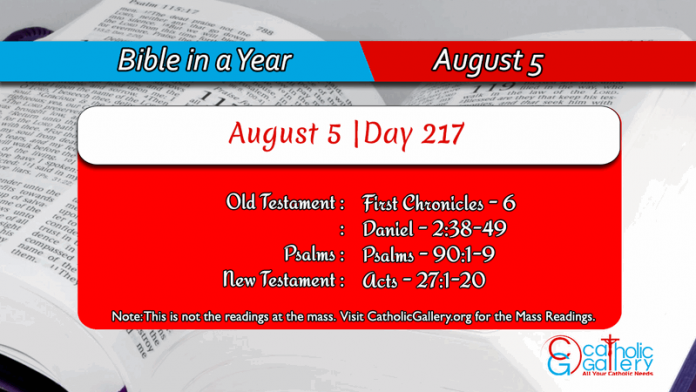 1 The sons of Levi: Gershom, Kohath, and Merari.

2 The sons of Kohath: Amram, Izhar, Hebron, and Uzziel.

10 Johanan conceived Azariah. He is the one who executed the priestly office in the house that Solomon built in Jerusalem.

15 Now Jehozadak departed, when the Lord took away Judah and Jerusalem, by the hands of Nebuchadnezzar.

16 So the sons of Levi were Gershom, Kohath, and Merari.

17 And these are the names of the sons of Gershom: Libni and Shimei.

18 The sons of Kohath: Amram, and Izhar, and Hebron, and Uzziel.

19 The sons of Merari: Mahli and Mushi. And so these are the kindred of Levi, according to their families.

20 Of Gershom: Libni his son, Jahath his son, Zimmah his son,

22 The sons of Kohath: Amminadab his son, Korah his son, Assir his son,

23 Elkanah his son, Ebiasaph his son, Assir his son,

25 The sons of Elkanah: Amasai and Ahimoth

26 and Elkanah. The sons of Elkanah: Zophai his son, Nahath his son,

27 Eliab his son, Jeroham his son, Elkanah his son.

28 The sons of Samuel: Vasseni the firstborn, and Abijah.

29 Now the sons of Merari were: Mahli, Libni his son, Shimei his son, Uzzah his son,

31 These are the ones whom David appointed over the singing men in the house of the Lord, in the place where the ark was located.

32 And they ministered before the tabernacle of the testimony with singing, until Solomon built the house of the Lord in Jerusalem. And they would stand according to their order in the ministry.

33 Truly, these are the ones who were assisting, with their sons, from the sons of Kohath: the singer Heman, the son of Joel, the son of Samuel,

39 And there was also his brother, Asaph, who was standing at his right, Asaph, the son of Berechiah, the son of Shimea,

48 There were also their brothers, Levites who were appointed for every ministry of the tabernacle of the house of the Lord.

49 Truly, Aaron and his sons were burning offerings upon the altar of holocausts and upon the altar of incense, for the entire work of the Holy of Holies, and to pray on behalf of Israel, in accord with all the things that Moses, the servant of God, had instructed.

50 Now these are the sons of Aaron: Eleazar his son, Phinehas his son, Abishua his son,

51 Bukki his son, Uzzi his son, Zerahiah his son,

53 Zadok his son, Ahimaaz his son.

55 And so, they gave Hebron, in the land of Judah, and its suburbs all around, to them,

56 but they gave the fields of the city, and the villages, to Caleb, the son of Jephunneh.

57 Then, to the sons of Aaron, they gave the cities of refuge: Hebron, and Libnah with its suburbs,

59 as well as Ashan and Beth-shemesh with their suburbs.

61 Now to the sons of Kohath, those remaining from their kindred, they gave ten cities, from the one half tribe of Manasseh, as a possession;

64 Also, the sons of Israel gave, to the Levites, cities and their suburbs,

68 as well as Jokmeam with its suburbs, and Beth-horon similarly,

69 and indeed Hilen with its suburbs, and Gath Rimmon in the same manner.

70 Then too, out of the one half tribe of Manasseh: Aner and its suburbs, Bileam and its suburbs; these in particular went to those who were remaining from the kindred of the sons of Kohath.

71 And to the sons of Gershom, from the kindred of the one half tribe of Manasseh: Golan, in Bashan, and its suburbs, and Ashtaroth with its suburbs;

74 truly, from the tribe of Asher: Mashal with its suburbs, and Abdon similarly;

77 Then to the remaining sons of Merari, from the tribe of Zebulun: Rimmono and its suburbs, and Tabor with its suburbs;

79 as well as Kedemoth and its suburbs, and Mephaath with its suburbs;

80 indeed also, from the tribe of Gad: Ramoth in Gilead and its suburbs, and Mahanaim with its suburbs;

38 and all the places wherein the sons of men and the beasts of the field dwell. He has likewise given the flying creatures of the air into your hand, and he has placed all things under your realm. Therefore, you are the head of gold.

39 And after you, another kingdom will rise up, inferior to you, of silver, and another third kingdom of brass, which will rule over the whole world.

40 And the fourth kingdom will be like iron. Just as iron shatters and conquers all things, so will it shatter and crush all these.

41 Furthermore, because you saw the feet and the toes to be part of potter’s clay and part of iron, the kingdom will be divided, but still, from the slip of iron it will take its origin, since you saw the iron mingled with the earthenware from clay.

42 And as the toes of the feet were partly of iron and partly of clay, part the kingdom will be strong and part will be crushed.

43 Yet, because you saw the iron mingled with pottery from the earth, they will indeed be combined together with the offspring of man, but they will not adhere to one another, just as iron cannot be mixed with earthenware.

44 But in the days of those kingdoms, the God of heaven will inspire a kingdom that will never be destroyed, and his kingdom will not be handed over to another people, and it will crush and will consume all these kingdoms, and this kingdom itself will stand in eternity.

45 In accordance with what you saw, because the stone was torn away from the mountain without hands, and it crushed the earthenware, and the iron, and the brass, and the silver, and the gold, the great God has shown the king what will happen after this. And the dream is true, and its interpretation is faithful.”

46 Then king Nebuchadnezzar fell on his face and adored Daniel, and he commanded that they should offer in sacrifice to him victims and incense.

47 And so the king spoke with Daniel and said, “Truly, your God is the God of gods, and Lord of kings, and also a revealer of secrets, since you could uncover this mystery.”

48 Then the king raised Daniel to a high rank and gave him many great gifts, and he appointed him as leader over all the provinces of Babylon and as chief of the magistrates over all the other wise men of Babylon.

49 However, Daniel required of the king that he appoint Shadrach, Meshach, and Abednego over the works of the province of Babylon. But Daniel himself was at the king’s door.

1 A prayer of Moses the man of God. Lord, thou hast been our refuge from generation to generation.

2 Before the mountains were made, or the earth and the world was formed; from eternity and to eternity thou art God.

3 Turn not man away to be brought low: and thou hast said: Be converted, O ye sons of men.

4 For a thousand years in thy sight are as yesterday, which is past. And as a watch in the night,

5 Things that are counted nothing, shall their years be.

7 For in thy wrath we have fainted away: and are troubled in thy indignation.

8 Thou hast set our iniquities before thy eyes: our life in the light of thy countenance.

9 For all our days are spent; and in thy wrath we have fainted away. Our years shall be considered as a spider:

1 Then it was decided to send him by ship to Italy, and that Paul, with the others in custody, should be delivered to a centurion named Julius, of the cohort of Augusta.

2 After climbing aboard a ship from Adramyttium, we set sail and began to navigate along the ports of Asia, with Aristarchus, the Macedonian from Thessalonica, joining us.

3 And on the following day, we arrived at Sidon. And Julius, treating Paul humanely, permitted him to go to his friends and to look after himself.

4 And when we had set sail from there, we navigated below Cyprus, because the winds were contrary.

5 And navigating though the sea of Cilicia and Pamphylia, we arrived at Lystra, which is in Lycia.

6 And there the centurion found a ship from Alexandria sailing to Italy, and he transferred us to it.

7 And when we had sailed slowly for many days and had barely arrived opposite Cnidus, for the wind was hindering us, we sailed to Crete, near Salmone.

8 And barely being able to sail past it, we arrived at a certain place, which is called Good Shelter, next to which was the city of Lasea.

9 Then, after much time had passed, and since sailing would no longer be prudent because the Fast Day had now passed, Paul consoled them,

10 and he said to them: “Men, I perceive that the voyage is now in danger of injury and much damage, not only to the cargo and the ship, but also to our own lives.”

11 But the centurion put more trust in the captain and the navigator of the ship, than in the things being said by Paul.

12 And since it was not a fitting port in which to winter, the majority opinion was to sail from there, so that somehow they might be able to arrive at Phoenicia, in order to winter there, at a port of Crete, which looks out toward the southwest and northwest.

13 And since the south wind was blowing gently, they thought that they might reach their goal. And after they had set out from Asson, they weighed anchor at Crete.

14 But not long afterward, a violent wind came against them, which is called the Northeast Wind.

15 And once the ship had been caught in it and was not able to strive against the wind, giving over the ship to the winds, we were driven along.

16 Then, being forced along a certain island, which is called the Tail, we were barely able to hold on to the ship’s lifeboat.

17 When this was taken up, they used it to assist in securing the ship. For they were afraid that they might run aground. And having lowered the sails, they were being driven along in this way.

18 Then, since we were being tossed about strongly by the tempest, on the following day, they threw the heavy items overboard.

19 And on the third day, with their own hands, they threw the equipment of the ship overboard.

20 Then, when neither sun nor stars appeared for many days, and no end to the storm was imminent, all hope for our safety was now taken away.