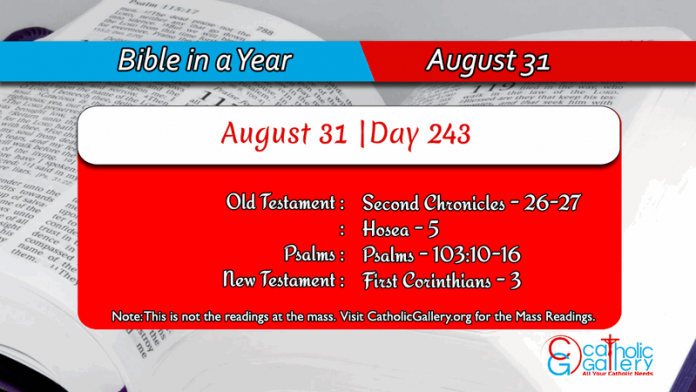 1 Then all the people of Judah appointed his son, Uzziah, who was sixteen years old, as king in place of his father, Amaziah.

2 He built up Eloth, and he restored it to the dominion of Judah. After this, the king slept with his fathers.

3 Uzziah was sixteen years old when he had begun to reign. And he reigned for fifty-two years in Jerusalem. The name of his mother was Jecoliah, from Jerusalem.

4 And he did what was right in the eyes of the Lord, in accord with all that his father, Amaziah, had done.

5 And he sought the Lord, during the days of Zechariah, who understood and saw God. And while he was seeking the Lord, he directed him in all things.

8 And the Ammonites weighed out gifts to Uzziah. And his name became widely known, even to the entrance of Egypt, because of his frequent victories.

10 Then he also constructed towers in the wilderness, and dug many cisterns, because he had much cattle, both in the plains and in the starkness of the wilderness. Also, he had vineyards and dressers of vines in the mountains and at Carmel. Certainly, he was a man devoted to agriculture.

12 And the entire number of the leaders, by the families of strong men, was two thousand six hundred.

13 And the entire army under them was three hundred and seven thousand five hundred, who were fit for war, and who fought on behalf of the king against the adversaries.

14 Also, Uzziah prepared for them, that is, for the entire army, shields, and spears, and helmets, and breastplates, and bows, as well as slings for the casting of stones.

15 And in Jerusalem, he made various kinds of machines, which he placed in the towers, and at the corners of the walls, so as to shoot arrows and large stones. And his name went forth to far away places, for the Lord was helping him and had strengthened him.

16 But when he had become strong, his heart was lifted up, even to his own destruction. And he neglected the Lord his God. And entering into the temple of the Lord, he intended to burn incense upon the altar of incense.

17 And entering immediately after him, Azariah the priest, and with him eighty priests of the Lord, very valiant men,

18 withstood the king, and they said: “It is not your office, Uzziah, to burn incense to the Lord; rather, it is the office of the priests, that is, of the sons of Aaron, who have been consecrated for this same ministry. Depart from the sanctuary, otherwise you will be in contempt. For this act will not be reputed to you for your glory by the Lord God.”

19 And Uzziah, having become angry, while holding in his hand the censer so that he might burn incense, threatened the priests. And immediately a leprosy arose on his forehead, in the sight of the priests, in the house of the Lord, at the altar of incense.

20 And when the high priest Azariah, and all the rest of the priests, had gazed upon him, they saw the leprosy on his forehead, and they hurried to expel him. Then too, he himself, becoming terrified, rushed to depart, because immediately he had become aware of the wound of the Lord.

21 And so, king Uzziah was a leper, even until the day of his death. And he lived in a separate house, being full of leprosy, because of which he had been ejected from the house of the Lord. Then Jotham, his son, directed the house of the king, and he was judging the people of the land.

22 But the rest of the words of Uzziah, the first and the last, were written by the prophet Isaiah, the son of Amoz.

23 And Uzziah slept with his fathers. And they buried him in the field of the royal sepulchers, because he was a leper. And Jotham, his son, reigned in his place.

1 Jotham was twenty-five years old when he had begun to reign, and he reigned for sixteen years in Jerusalem. The name of his mother was Jerusha, the daughter of Zadok.

2 And he did what was right before the Lord, in accord with all that his father, Uzziah, had done, except that he did not enter into the temple of the Lord, and still the people were transgressing.

3 He improved the high gate of the house of the Lord. And he built many things upon the wall of Ophel.

4 Also, he built cities in the mountains of Judah, and fortresses and towers in the forests.

6 And Jotham was strengthened, because he had directed his way before the Lord his God.

7 Now the rest of the words of Jotham, and all his battles and works, have been written in the book of the kings of Israel and Judah.

8 He was twenty-five years old when he had begun to reign, and he reigned for sixteen years in Jerusalem.

9 And Jotham slept with his fathers, and they buried him in the City of David. And his son, Ahaz, reigned in his place.

1 Hear this, priests, and pay attention, house of Israel, and listen closely, house of the king. For there is a judgment against you, because you have become a trap for those you watched over, and a net stretched out over Tabor.

2 And you have led astray victims into the depths, though I am the teacher of them all.

4 They will not set their thoughts to return to their God, for the spirit of fornication is in the midst of them, and they have not known the Lord.

5 And the arrogance of Israel will answer to his face. And Israel and Ephraim will fall in their iniquity, and even Judah will fall with them.

6 With their flocks and their herds, they will go to seek the Lord, and they will not find him. He has taken himself away from them.

7 They have sinned against the Lord. For they have conceived sons that are strangers. Now one month will devour them with all their own.

8 Sound the bugle in Gibeah, the trumpet in Ramah. Shout in Bethaven, behind your back, O Benjamin.

9 Ephraim will be in desolation on the day of correction, for within the tribes of Israel, I have revealed faith.

10 The leaders of Judah have become like those who assume the end. I will pour my wrath over them like water.

11 Ephraim has been enduring malicious slander and broken judgment, because he began to go after filth.

12 And I will be like a moth to Ephraim, and like decay to the house of Judah.

13 And Ephraim saw his own weakness, and Judah his chains. And Ephraim went to Assur, and he sent to the Avenging king. But he will not be able to heal you, nor is he able to release you from your chains.

14 For I will be like a lioness to Ephraim, and like a lion’s offspring to the house of Judah. I myself will seize and go forth. I will take away, and there is no one who can rescue.

15 I will go and return to my place, until you shall grow faint and seek my face.

11 For according to the height of the heaven above the earth: he hath strengthened his mercy towards them that fear him.

12 As far as the east is from the west, so far hath he removed our iniquities from us.

14 For he knoweth our frame. He remembereth that we are dust:

15 Man’s days are as grass, as the flower of the field so shall he flourish.

2 I gave you milk to drink, not solid food. For you were not yet able. And indeed, even now, you are not able; for you are still carnal.

3 And since there is still envy and contention among you, are you not carnal, and are you not walking according to man?

4 For if one says, “Certainly, I am of Paul,” while another says, “I am of Apollo,” are you not men? But what is Apollo, and what is Paul?

5 We are only the ministers of him in whom you have believed, just as the Lord has granted to each of you.

6 I planted, Apollo watered, but God provided the growth.

7 And so, neither he who plants, nor he who waters, is anything, but only God, who provides the growth.

8 Now he who plants, and he who waters, are one. But each shall receive his proper reward, according to his labors.

10 According to the grace of God, which has been given to me, I have laid the foundation like a wise architect. But another builds upon it. So then, let each one be careful how he builds upon it.

11 For no one is able to lay any other foundation, in place of that which has been laid, which is Christ Jesus.

12 But if anyone builds upon this foundation, whether gold, silver, precious stones, wood, hay, or stubble,

13 each one’s work shall be made manifest. For the day of the Lord shall declare it, because it will be revealed by fire. And this fire will test each one’s work, as to what kind it is.

14 If anyone’s work, which he has built upon it, remains, then he will receive a reward.

15 If anyone’s work is burned up, he will suffer its loss, but he himself will still be saved, but only as through fire.

16 Do you not know that you are the Temple of God, and that the Spirit of God lives within you?

18 Let no one deceive himself. If anyone among you seems to be wise in this age, let him become foolish, so that he may be truly wise.

19 For the wisdom of this world is foolishness with God. And so it has been written: “I will catch the wise in their own astuteness.”

20 And again: “The Lord knows the thoughts of the wise, that they are vain.”

22 For all is yours: whether Paul, or Apollo, or Cephas, or the world, or life, or death, or the present, or the future. Yes, all is yours.

◄ August 30 September 1 ►
Bible in a year – Index
July September October
Simplest Bible in a Year plan compiled using the “Catholic Public Domain Version Bible“. This is not the Readings at the Mass. For the Mass Readings, check the Mass Readings taken from the New Jerusalem Bible or the Douay-Rheims Catholic Bible.
By Pradeep Augustine
Print
Facebook
WhatsApp
Twitter
Pinterest